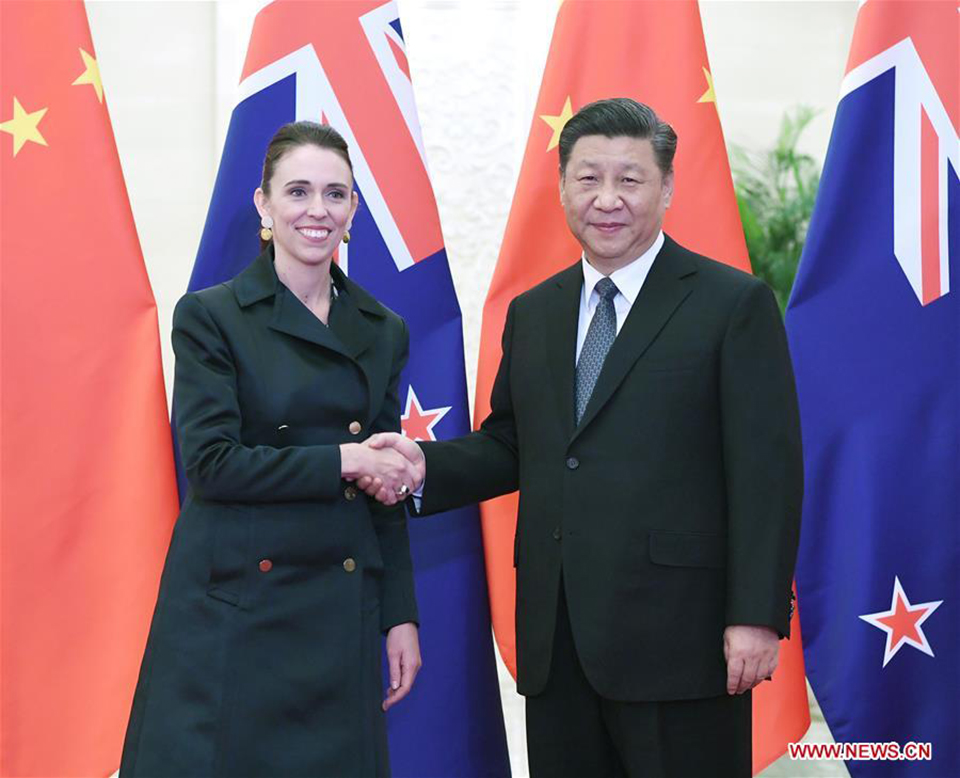 WELLINGTON, April 4: Jacinda Ardern has concluded her first official visit to China since becoming New Zealand's prime minister in October 2017, saying her country welcomes investment from Chinese enterprises and pledging to create a favorable business environment without discrimination against any enterprise from any country.

During her meetings with Chinese leaders, both sides called for speeding up negotiations to upgrade the decade-old bilateral Free Trade Agreement (FTA), continuously enriching the China-New Zealand comprehensive strategic partnership, and boosting cooperation under the China-proposed Belt and Road Initiative (BRI).

During their meeting in Beijing on Monday, Chinese President Xi Jinping and Ardern agreed to continuously enrich the China-New Zealand comprehensive strategic partnership based on the principles of mutual trust and mutual benefit.

Ardern's visit to China at a moment when her country was facing a special important agenda showed the great importance she and the New Zealand government attached to bilateral ties, said Xi, expressing sincere condolences for the deadly shootings in Christchurch on March 15.

China has always viewed New Zealand as a sincere friend and partner, Xi said, adding that China-New Zealand ties, established 47 years ago, had always been at the forefront among relationships between China and Western countries.

China stands ready to work with New Zealand to maintain their ties as a "front-runner" in relations between China and Western countries, Xi said.

Under the new circumstances, the two countries need to further deepen mutual understanding and trust and respect each other's core interests and major concerns in the spirit of openness, inclusiveness and seeking common grounds while shelving differences, he said, calling on both sides to expand substantial cooperation.

Although Ardern's visit was reduced to a brief 10 hours due to her intensive domestic schedule to handle the aftermath of the mass shooting, her short trip has attracted worldwide attention.

"It was a very important and timely visit... I really attest to the value that this government puts on the relationship with China, and I also thought there was a number of really interesting and significant agreements between the leaders," said Jason Young, director of the New Zealand Contemporary China Research Centre at Victoria University of Wellington.

Stephen Jacobi, executive director of the New Zealand China Council, said the visit was rich in both symbolism and substance. The symbolism was that Ardern met Xi and Chinese Premier Li Keqiang and was received in the Great Hall of the People.

"The images of those meetings have been broadcast around China and New Zealand to demonstrate the strength of the relationship between New Zealand and China," Jacobi said, adding that the visit also has substance, particularly in terms of trade and economy.

Christchurch city councilor Jimmy Chen said it is most important for both countries' leaders to meet face to face to clear up some issues and build up mutual trust and confidence.

Calling for speeding up negotiations to upgrade the FTA, Xi said China will support capable enterprises to invest in New Zealand while New Zealand needs to provide a fair, just and unbiased business environment for Chinese enterprises.

China welcomes New Zealand to participate in the Belt and Road construction, Xi said, encouraging both countries to enhance cooperation in international affairs, jointly strive for an open world economy and uphold multilateralism and multilateral trading.

China stands ready to synergize the BRI with New Zealand's development strategies, tap into the potential and promote bilateral economic and trade cooperation, Li said, emphasizing that the two sides should create a fair, just, transparent, convenient and non-discriminatory business environment for enterprises from both countries.

Wayne Huang, principal of the East Auckland-based Institute of Commercial Education New Zealand, said China's rapidly developing economy and its large consumer base provide a huge market for New Zealand and the rest of the world.

Since 2013, China has been New Zealand's largest trading partner and China's peaceful development has become an important opportunity for New Zealand, Huang said.

New Zealand was the first developed country to recognize China as a market economy in 2004 and to sign and launch negotiations to upgrade the FTA with China.

According to the Chinese government, two-way trade reached 16.86 billion U.S. dollars last year, a 14-percent increase on a year-on-year basis.

As a result of such robust trade, more and more made-in-China electronics and textiles are available in New Zealand, while lamb and a wide range of dairy products like milk powder are becoming increasingly popular among Chinese consumers.

New Zealand is the first developed Western economy to sign a Memorandum of Understanding on the BRI with Beijing. Also, following Ardern's visit, New Zealand Trade Minister David Parker will lead a business delegation to attend the second Belt and Road Forum for International Cooperation in Beijing in April.

Jacobi of the New Zealand China Council said one particular thing his council is working on is a conference that would look at how to build a link between China, New Zealand and South America as part of the Belt and Road.

Each country has to decide for itself how it wants to be involved, and there should be a uniquely Kiwi way of being involved in the Belt and Road, Jacobi said.

And Auckland could be turned into a business hub similar to Singapore to connect China and South America in terms of flights and cooperation in infrastructure, environmental protection and high-tech development, said Huo.

CHINA, March 27: China Development Bank (CDB) has provided financing of over $190 billion for more than 600 projects of the... Read More...