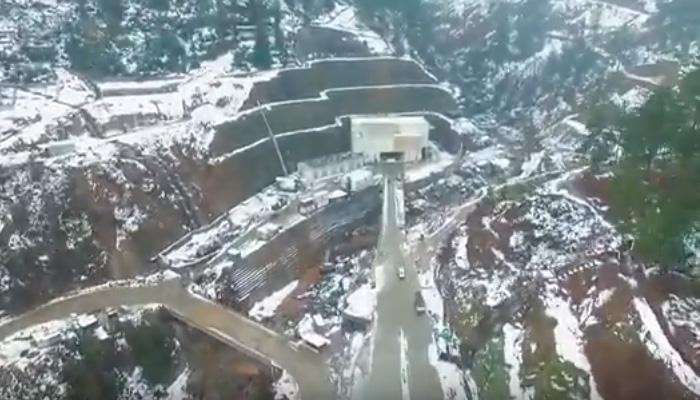 SRINAGAR, April 2:  Indian Prime Minister Narendra Modi on Sunday opened an 11-kilometer (7-mile) tunnel through the Himalayan terrain to help ease travel on a highway linking the troubled Kashmir Valley with the rest of India.

Modi drove in an open jeep through the all-weather route, which is expected to help trade and tourism in the region. The highway is blocked sometimes for hours and even days due to heavy snow, monsoon rains and landslides.

However, separatist leaders fighting for the region's independence from India or its merger with neighboring Pakistan shut businesses and public transport in the region on Sunday and said the construction of tunnels and roads would not succeed in appeasing them.

Kashmir is a "political issue and not a problem related to governance, economic packages, incentives or law and order," they said in a joint statement issued on Friday.

They said Modi was visiting the state at a time when the situation was "extremely gloomy."

However, Jitendra Singh, a minister in Modi's government from the region, said the connectivity through the tunnel would cut down travel time.

"It is an alternative to the highway, which gets closed during snow and rain. It will boost trade and increase revenue in the state," Singh said.

Most people in the Indian-controlled portion of Kashmir favor its independence or a merger with Pakistan, which also administers a part of the territory across a heavily militarized de facto border through the mountains. Since 1989, at least 70,000 people have been killed in an armed uprising and ensuing Indian military crackdown.

The rebel groups have largely been suppressed by Indian troops in recent years, and resistance is now principally expressed through street protests.

India and Pakistan have fought two wars over control of Kashmir since they won independence from British colonialists in 1947.

SRINAGAR, India, Aug 31: Protests against Indian rule erupted at many places in Kashmir on Wednesday after authorities lifted a... Read More...