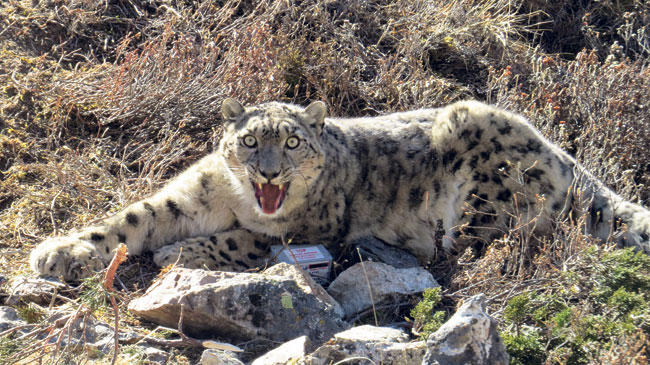 KATHMANDU, Oct 22: The government is all set to bring in a new Snow Leopard Conservation Action Plan for Nepal, aimed at safeguarding one of the most endangered wildlife species in a more effective way.

Until the new plan kicks in, the Snow Leopard Conservation Action Plan for Nepal 2005-2015 will renain in effect, according to the Department of National Parks and Wildlife Conservation (DNPWC) under the Ministry of Forests and Soil Conservation.

As Nepal will be joining hands with global communities to mark the third International Snow Leopard Day on  October 23, conservationists have echoed the need for an effective plan to preserve this endangered species.

The day, which was first celebrated in 2014 to mark a historic agreement between 12 snow leopard range countries, is intended to show commitment in preserving and saving this elusive cat, which in Nepal is mostly distributed along the northern frontier.

According to wildlife experts, conservation efforts for the snow leopards in Nepal are paying off. The government's last  snow leopard census in 2009 has estimated their population to be somewhere between 301 and 400.

“The joint conservation efforts of the government and various wildlife organizations have proven effective. We are also happy about the positive results at snow leopard breeding centers. That's why we are positive that the population has increased since the last census,” claimed Dr Kanchan Thapa, conservation biologist at World Wildlife Fund (WWF) Nepal.

According to Thapa, the government is collaborating with various wildlife conservation agencies on a new census.

Thapa added that poaching, upslope habitat shifts, as well as unregulated high volumes of yarsagumba pickers during season have contributed to habitat degradation for snow leopards. According to WWF, the population of snow leopards worldwide is estimated at around 4,510 to 7,350.

DANG, Oct 5: Two people have been arrested in possession of leopard skin from Lamahi bazaar on Wednesday. ... Read More...