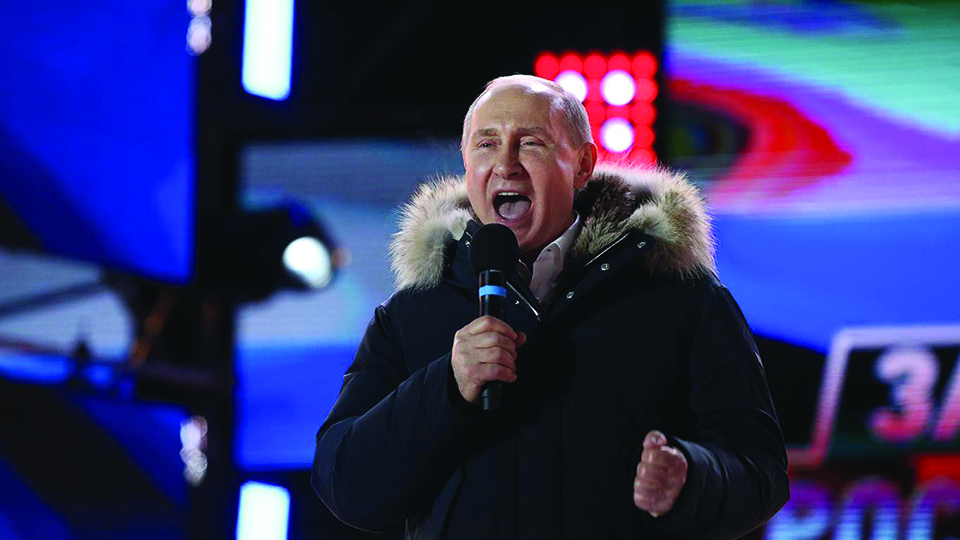 MOSCOW – Since the fall of the Soviet Union, political power within the Kremlin has followed the logic of musical chairs. Factotums surface and then disappear, only to resurface at a later date—all according to the whims of the man in charge. And for most of this century, that man has been Vladimir Putin.

The latest example is Putin’s nomination of former Finance Minister Alexei Kudrin to chair the Accounts Chamber of the Russian Federation. The selection of Kudrin for this role calls to mind former President Boris Yeltsin’s own search for a successor who would preserve his legacy and protect his family and fortune.

Yeltsin had amassed around $15 million while in office, and he ultimately put his trust in Putin – a former KGB man – to protect his children and his money, and to keep him out of prison. Of course, Yeltsin’s boodle now seems rather quaint compared to Putin’s alleged $70 billion in personal wealth, which he has somehow accumulated on an annual Kremlin salary of just $137,000.

After 18 years as either president or prime minister, it is now Putin who needs his legacy and fortune protected. Beyond personal riches, Putin hopes to preserve the paternalistic ruling system and top-down power structure that he has built up over the past two decades.

In 2008, Putin circumvented constitutional consecutive-term limits by having his diminutive, obedient, and easily forgettable deputy prime minister, Dmitry Medvedev, keep his seat warm until he could return to the presidency in 2012. A far more competent placeholder would have been Sergei Ivanov, a former KGB general. But Ivanov is much taller than Putin, who, at any rate, had only achieved the rank of colonel. An obvious potential threat to Putin’s power, Ivanov was passed over, and has since been relegated to the role of Russia’s “chief botanist,” overseeing the environment and transportation.

Earlier this month, Putin was re-inaugurated—or, rather, crowned—in spectacular fashion, with Medvedev once again assuming the role of pliant prime minister. Despite his years in office, Medvedev is still known more for his fancy ties and expensive watches than for his executive actions.

Still, Medvedev’s own corruption clearly irks many Russians. After the opposition leader Alexei Navalny made him the subject of recent YouTube videos, tens of thousands of protesters took to the streets in cities across the country. Having proved utterly incompetent in meeting Russia’s economic and social needs, Medvedev’s only job now is to preserve Putin’s legacy.

Kudrin, who replaces the former Accounts Chamber chair Tatyana Golikova (who was obedient but lacking in stature), provides a curious counterbalance to Medvedev. In 2011, Kudrin resigned as finance minister after publicly suggesting that Medvedev was an incompetent fool. Kudrin’s nomination as Russia’s chief accountant matters because it will give him—and thereby Putin—more knowledge of corruption. And with that, Putin will be able to manipulate anyone who may have future designs on the presidency, perhaps with the goal of reinstalling Medvedev as a placeholder after 2024.

Indeed, the job of the Accounts Chamber is to keep tabs on pretty much everything—Kudrin has already stated that he will be reporting on the performance of ministers and ministries—but particularly the military, upon which Putin has staked his bid for great-power status. He dedicated a third of his State of the Nation address in March to the military, showcasing a variety of weapons, rocket systems, and nuclear-powered missiles with “unlimited” range.

Putin has always been a great fan of the siloviki—former Soviet military and intelligence officers—who make up the bulk of his cabinet and account for the Kremlin’s unchecked power over Russian political life. By championing Russia’s military-industrial complex, Putin can keep the siloviki occupied and on his side. To that end, he has reinstated the World War II victory parades that were discontinued under Yeltsin. The events now grow more breathtaking and grandiose with each passing year.

But recent reports suggest that Russia’s military readiness is more fiction than fact. The “invincible” missiles that Putin has touted have apparently crashed during tests, and are thus little more than militaristic props. One conclusion to draw from these failures is that someone in the Ministry of Defense is stealing. There is no other plausible excuse for failing to deliver the weapons Putin ordered.

As it happens, a new study finds that Russia’s defense and intelligence ministries are among the state’s most corrupt institutions. In 2017, they were involved in 1,300 of a total of 12,000 corruption cases—one in nine. Against this backdrop, Kudrin has clearly been installed to ensure that the “trusted” security apparatus can actually be trusted.

Moreover, the current defense minister, Sergei Shoigu, is probably now in the Kremlin’s crosshairs. Shoigu gained national popularity a decade ago while running the Ministry of Emergency Situations, and he has since been prominently featured as a savior in military garb, looking dapper at the front of victory parades.

Unlike the widely mocked Medvedev, Shoigu looks like a man in charge. But that poses a problem for Putin’s own claim to be the protector of the Russian nation. There can be only one brave leader who saves people from Siberian tigers and hang-glides with endangered Siberian white cranes.

As with Ivanov, Putin fears that another silovik may someday vie for his job. Though Shoigu’s Siberian-Mongolian ancestry effectively disqualifies him from being elected by the country’s vast majority of ethnic Russians, Putin is not one to take chances. As if to drive the point home, Kudrin’s nomination was accompanied by an announcement that Yevgeny Zinichev, the new minister of emergency situations, will now report directly to Putin, further diminishing a potential power base for Shoigu.

If a rival from the security establishment were to assume the presidency, he could choose to build his own legacy, rather than honor Putin’s. It is up to Medvedev and Kudrin, the rare civilians in Putin’s inner circle, to make sure that doesn’t happen.

KATHMANDU, June 10 : We all have secrets which we wished never emerged from the dark pits of the mind.... Read More...

Russian media has revealed that a head-on crash in which a man was killed involved Vladimir Putin's official black BMW. Read More...