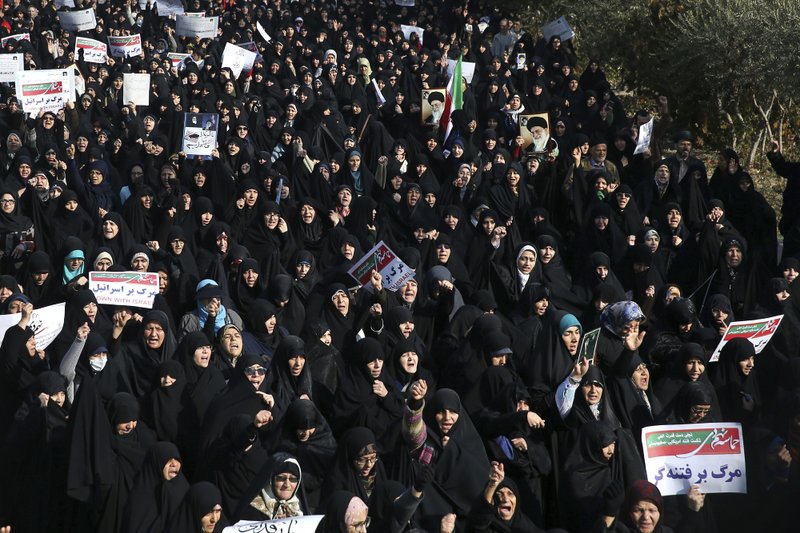 TEHRAN, Dec 31: A wave of spontaneous protests over Iran’s weak economy swept into Tehran on Saturday, with college students and others chanting against the government just hours after hard-liners held their own rally in support of the Islamic Republic’s clerical establishment.

The demonstrations appear to be the largest to strike the Islamic Republic since the protests that followed the country’s disputed 2009 presidential election.

Thousands already have taken to the streets of cities across Iran, beginning at first on Thursday in Mashhad, the country’s second-largest city and a holy site for Shiite pilgrims.

The protests in the Iranian capital, as well as President Donald Trump tweeting about them, raised the stakes. It also apparently forced state television to break its silence, acknowledging it hadn’t reported on them on orders from security officials.

“Counterrevolution groups and foreign media are continuing their organized efforts to misuse the people’s economic and livelihood problems and their legitimate demands to provide an opportunity for unlawful gatherings and possibly chaos,” state TV said.

The protests appear sparked by social media posts and a surge in prices of basic food supplies, like eggs and poultry. Officials and state media made a point Saturday of saying Iranians have the right to protest and have their voices heard on social issues.

However, protesters in Tehran on Saturday chanted against high-ranking government officials and made other political statements, according to the semi-official Fars news agency. Hundreds of students and others joined a new economic protest at Tehran University, with riot police massing at the school’s gates as they shut down surrounding roads.

Social media videos purport to show clashes between protesters and police in several areas. At least 50 protesters have been arrested since Thursday, authorities said. State TV also said some protesters chanted the name of Iran’s one-time shah, who fled into exile just before its 1979 Islamic Revolution.

Many in Iran are learning about the protests and sharing images of them through Telegram, a mobile phone messaging app popular among the country’s 80 million people. Iran’s Telecommunications Minister Mohammad Javad Azari Jahromi wrote to Telegram CEO Pavel Durov on Saturday, complaining about one chat channel was “encouraging hateful conduct, use (of) Molotov cocktails, armed uprising and social unrest.”

“A Telegram channel (amadnews) started to instruct their subscribers to use Molotov cocktails against police and got suspended due to our ‘no calls for violence’ rule. Be careful - there are lines one shouldn’t cross.” Durov tweeted.

The semi-official Tasnim news agency later quoted the deputy commander of Tehran’s Revolutionary Guard base, Brig. Gen. Ismail Kowsari, as saying: “Peace has returned to city of Tehran and its surroundings.” He added that if inflation was the reason the protesters took to the streets they should not have destroyed property, according to the report.

Earlier Saturday, hard-liners rallied across the country to support Supreme Leader Ayatollah Ali Khamenei and others. The rallies, scheduled weeks earlier, commemorated a mass 2009 pro-government rally challenging those who rejected the re-election of hard-line President Mahmoud Ahmadinejad amid fraud allegations.

In Tehran, some 4,000 people gathered at the Musalla prayer ground in central Tehran for the rally. They called for criminal trials for Mir Hossein Mousavi and Mahdi Karroubi, leaders in the 2009 protests who have been under house arrest since 2011. Iranian President Hassan Rouhani, whose administration struck the 2015 nuclear deal with world powers, campaigned on freeing the men, though they remain held.

Mohsen Araki, a Shiite cleric who serves in Iran’s Assembly of Experts, praised Rouhani’s efforts at improving the economy. However, he said Rouhani needed to do more to challenge “enemy pressures.”

“We must go back to the pre-nuclear deal situation,” Araki said. “The enemy has not kept its commitments.”

Ali Ahmadi, a pro-government demonstrator, blamed the U.S for all of Iran’s economic problems.

“They always say that we are supporting Iranian people, but who should pay the costs?” Ahmadi asked.

Iran’s economy has improved since the nuclear deal, which saw Iran limit its enrichment of uranium in exchange for the end of some of the international sanctions that crippled its economy. Tehran now sells its oil on the global market and has signed deals for tens of billions of dollars of Western aircraft.

That improvement has not reached the average Iranian, however. Unemployment remains high. Official inflation has crept up to 10 percent again. A recent increase in egg and poultry prices by as much as 40 percent, which a government spokesman has blamed on a cull over avian flu fears, appears to have been the spark for the economic protests.

While police have arrested some protesters, the Revolutionary Guard and its affiliates have not intervened as they have in other unauthorized demonstrations since the 2009 election. The economic protests initially just put pressure on Rouhani’s administration.

Trump tweeted out support for the protests Saturday.

“The entire world understands that the good people of Iran want to change, and, other than the vast military power of the United States, that Iran’s people are what their leaders fear the most....” he tweeted. “Oppressive regimes cannot endure forever, and the day will come when the Iranian people will face a choice. The world is watching!”

It’s unclear what effect Trump’s support would have. Iranians already are largely skeptical of him over his refusal to re-certify the nuclear deal and Iran being included in his travel bans. Trump’s insistence in an October speech on using the term “Arabian Gulf” in place of the Persian Gulf also has also riled the Iranian public.

Meanwhile, U.S. Secretary of State Rex Tillerson’s comments in June to Congress saying American is working toward “support of those elements inside of Iran that would lead to a peaceful transition of that government” has been used by Iran’s government of a sign of foreign interference in its internal politics.

“Iran’s leaders have turned a wealthy country with a rich history and culture into an economically depleted rogue state whose chief exports are violence, bloodshed and chaos,” the statement said.

“The noble Iranian nation never pays heed to the opportunist and hypocritical mottos chanted by the U.S. officials and their interfering allegations on domestic developments in the Islamic Republic of Iran,” the state-run IRNA news agency quoted ministry spokesman Bahram Ghasemi as saying.

KATHMANDU, March 8: The agitating teachers, who had been staging protests since Sunday, ended their strike after reaching an agreement... Read More...