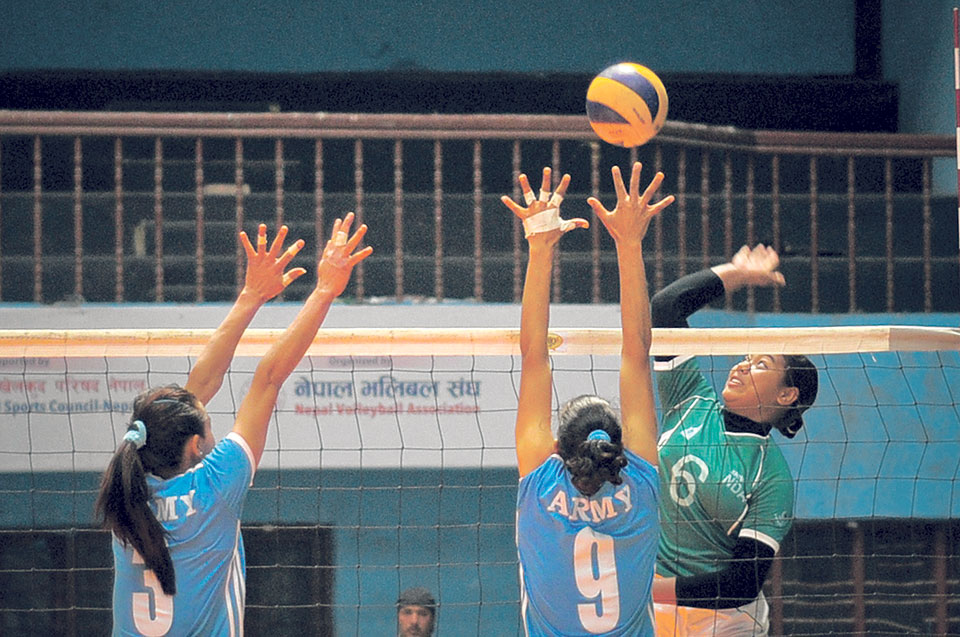 In Group A matches of women’s category, NDA saw off TAC 25-15, 25-11, 25-20 on straight sets. With the win, NDA entered into the semifinals as the group winner with nine points, while TAC, who had won two matches, collected six points and secured a last four berth.

Earlier, on the same day, Padmodaya Youth Club beat Dhorpatan Sports Club 19-25, 25-16, 25-9, 25-20 in a consolation match as both the teams had already been knocked out of the tournament.

Jawalakhel Volleyball Training Center will take on the other departmental team Armed Police Force (APF) in group B to fix the group winner.

Other departmental team Nepal Police Club (NPC) and APF have three points each, while Jawalakhel is yet to register a single point.

Naya Bazaar will now take on TAC for a place in the semifinals. TAC is the group winner of Group D, while NPC will play against Dhorpatan for a runner-up place on Thursday.

In Group A, Mani Mukund secured a quarterfinal place with a 3-1 set win over Western Volleyball Association.

KATHMANDU, Nov 9: Nepal has advanced to the semifinals of the AFC Solidarity Cup on Tuesday after a convincing 3-0 victory... Read More...

Finding the diamond within

Govt itself has obstructed construction of Gautam Buddha International Airport: Poudel
7 hours ago