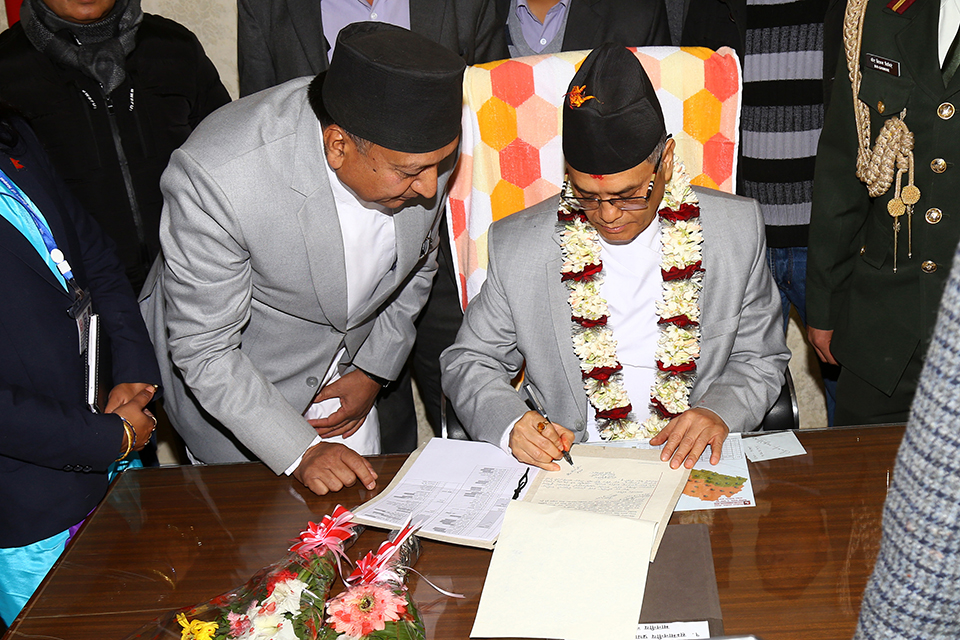 The CJ, who reached the Supreme Court following the swearing-in ceremony at the Office of the President, Shital Niwas today declared that Joshee was not getting any daily assignment right from today. He expressed his hope that Joshi would help the court find a way out.

"If our moving out of the court helps bolster people's trust on judiciary, we should be ready for the same. Judiciary should not be dragged into controversy time and again and I decided to relieve him from daily works bearing in mind the same need, and he will not be getting any assignment in the future, too. "

The CJ holds the rights of determining the daily assignments for court judges.

The senior most justice was seen in the court when the new CJ assumed office, but he left the court before CJ Rana organized a press meet.

Speaking in the press meet, the CJ recalling his commitments in course of the parliamentary hearing on the Constitutional Council recommendation to appoint him as the CJ to take the image of the judiciary to a new height, underlined the need of accepting the decision of the sovereign Parliamentary Hearing Committee.

He went on to say that he decided to not to include judge Joshee who was already disqualified by the Committee to be as the CJ in daily assignment as he believed that his active stay in the court would further promote to drag the judiciary into controversy.

Stating that Joshee was his school and college colleague and such relations could not be entertained in the chamber of profession. He reiterated his commitment to contribute to taking the image of judiciary to a new height and build an atmosphere so that the court could function independently. RSS

KATHMANDU, Jan 4: Not only the constitutional experts but also the general public have grown worried as top leaders of... Read More...

Man dies after choking on piece of meat
59 minutes ago