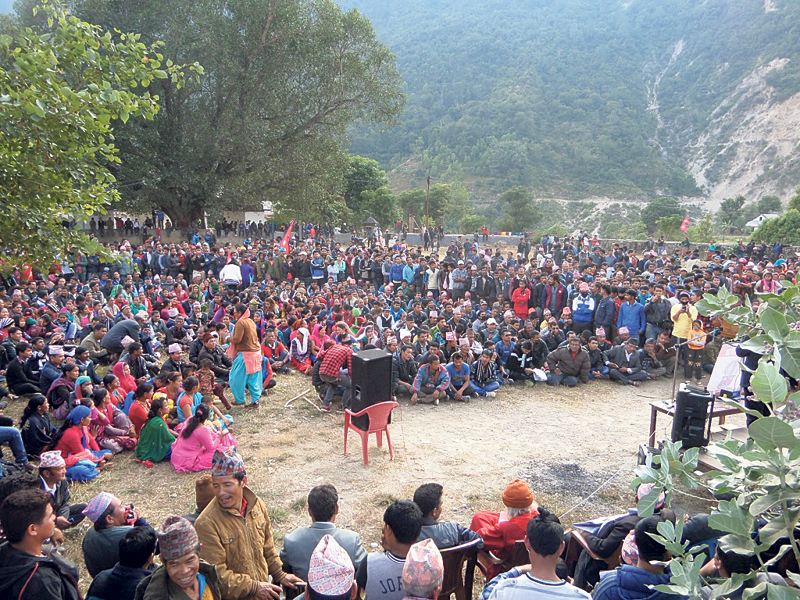 Locals of Rolpa and Pyuthan holds a mass meeting at the border of the two districts to protest the proposed government plan to change the provincial delineation Province 5. Photo: Republica

KATHMANDU, Dec 2: Following the government's decision to revise the federal boundaries in provinces 4 and 5, locals of the related districts on Thursday shut down public offices and took to the streets for the second consecutive day. Protestors in Gulmi, Dang, Palpa, Argakhanchi, Rolpa and Pyuthan staged demonstration, burnt tires and chanted slogans against the 'anti-people decision'.

They have warned to intensify protests until and unless the government reverses its decision and agrees to keep the federal set-up finalized under the constitution intact.

In Rolpa, party cadres and leaders of Nepali Congress have openly stood against the decision despite the party's alliance with the government. Nepali Congress lawmaker from Rolpa, Amar Singh Pun who has been leading the protest stated that the decision to reshuffle provinces cannot be supported in any condition. “For me, the people of Rolpa are greater than the party and I cannot stand against them,” he said. “Here, people are not happy at all to be merged with other provinces. Pyuthan and Rolpa cannot stay under Province 4 as decided now. We want it in Province 5 as decided earlier,” he added.

In Palpa and Argakhanchi, protesters have declared infinite strike. Student unions, cadres of several political parties and commoners were on streets to protest the amendment bill. People's normal life came to a halt due to banda enforced by the protestors.

According to Bishnu Muskan, Nepali Congress district chairman of Argakhanchi, protestors are not limited to towns, but also in villages. “There's overwhelming protests against the decision. How can the government apply for it? People are not ready for it,” Muskan said. He added that no public offices would be opened until the government reverses the decision.

Muskan informed that an all-party meet would be organized on Friday which would be graced by several important party leaders including Bamdev Gautam, Gokarna Bista and Top Bahadur Rayamajhi. “They would be addressing the mass on Friday. Locals are happy at least there are few leaders who understand them. Further protest programs would be announced,” he said.

According to the protestors, the amendment bill regarding the federal boundaries has pleased nobody so it is simply worthless. Instead, it has forced people to come to streets which means, the government only wants to hurt public sentiments. Several student unions and civil societies have issued statement demanding reversal of the government's decision. The statements commonly read that the new decision is simply a serious flaw which will lead the country into a huge mess and war. So , it has to be revised.

PM for amendment but not to boundaries for now

KATHMANDU, March 24: Prime Minister Pushpa Kamal Dahal has ruled out the possibility of an immediate revision in the federal boundaries... Read More...