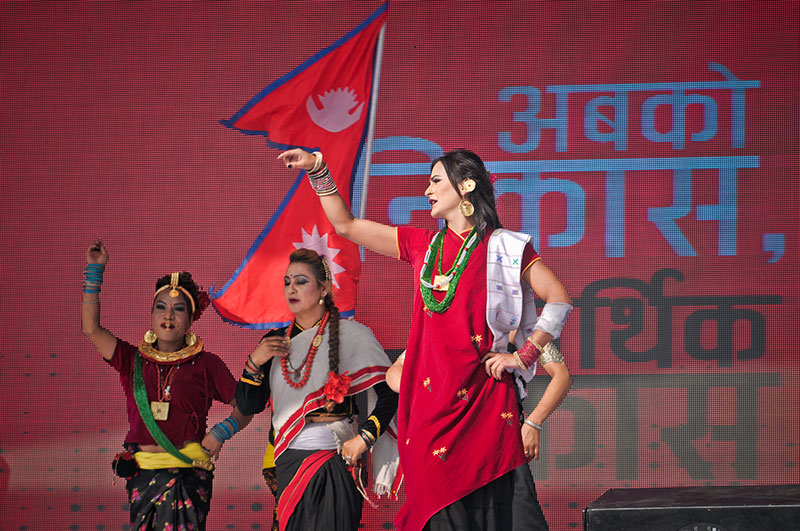 Naya Shakti Nepal has made public its incomes and expenses (balance sheet), which is the first in Nepal
Naya Shakti Nepal has initiated a new phase in the political history of Nepal. On June 12th, the day of declaration of Naya Shakti Nepal, the Dhasarath Ranglashala was packed with thousands of people, with thousands more waiting outside as they could not find space inside. No leaders were seen on the podium as they were all sitting on the ground alongside common people. But there were no traffic jams. Not a single pamphlet littered the roads or city walls. People walked to the stadium calmly and inside they witnessed the start of a movement that they hoped would now work to build a prosperous Nepal.

Naya Shakti started by winning the hearts and minds of common people. The message was clear: anything is possible in Nepal if we have visionary leaders. The common people were fed up with past political rallies and gatherings, which were all arrogant shows of power: political animals acted like they owned the roads, creating traffic jams and littering streets and public places with pamphlets, making the city a veritable mess.

Naya Shakti has shown political rallies and demonstrations can be decent and peaceful. It has also shown that leaders are no more masters of common people. Everyone is equal. Some journalists, politicians and intellectuals were suspicious of our ad expense, and they made a hue and cry about it on social media. They did not understand that we didn’t have to pay commercial rates and many ads were complementary.

Furthermore, Naya Shakti made public their incomes and expenses (balance sheet), the first time such a thing has happened in Nepal. Apart from this, other misleading news was spread such as Naya Shakti failed to form a central committee due to internal feuds. But we never intended to have a central committee so soon. Our discussions following party formation focused on the key political, economical and organizational issues.

Some intellectuals consider Naya Shakti devoid of any political ideology, which is apparently the reason the party will fail. One senior politician made a bitter comment on his Facebook page that Naya Shakti was dead the day it was born as it does not have an ideology. But Naya Shakti does not believe in outdated left or right ideology. It believes in practical ideology of improving people’s livelihoods through rapid and equitable economic growth and development.

Naya Shakti’s mantra is inclusion and proportionate representation in every organ of the party and the state. This gives moral boost to disadvantaged and marginalized groups left out of mainstream development. Naya Shakti would ensure equal participation of three main clusters: Arya-Khas, Adibasi-Janjati and Madheshis in both party structure as well as its future government. The same formula applies for women’s representation.

Basically, the party adheres to five principles: equitable prosperity; proportional/inclusive/ participatory democracy; good governance/good conduct; independence/sovereignty; and enhanced socialism. Naya Shakti believes in prosperity of Nepal by harnessing its vast resources, but it also believes the fruits should reach all sectors/groups of the society.

Although Naya Shakti has a roadmap for rapid economic prosperity, it cannot implement it unless it comes to power and forms a government.

Nonetheless, we aim to immediately start working for the economic revolution that we want to bring about. To this end, Naya Shakti will soon start employment generation activities among the youth. Party-cadre training will focus on enhancing productivity and production capacity for rapid economic growth. Three key programs will be launched: ‘Yes, I can, and I will do’ youth entrepreneurship program; Self-employment in production enterprises; and Smart business cooperative development. Employment generation through entrepreneurship development will be a key priority of Naya Shakti.

One of the great strengths of Naya Shakti is its dedicated technocrats with diverse expertise and experience working in production enhancement and economic development. They are committed to passing their knowledge and expertise to the youth, and reaching out to rural areas and serving the country. The production and youth employment programs will make best use of party technocrats including volunteer technocrats from the outside.

In the end, Naya Shakti has emerged as a strong alternative force to overcome the state of misrule, corruption, social injustice and underdevelopment. It aims to expedite economic growth with social and environmental justice. As morning shows the day, the unprecedented outpouring of thousands of common people at the Dasharath Ranglashala on June 12th was a historical moment. It demonstrates that Naya Shakti indeed has a lot to offer to the country.

The author has a PhD in Agricultural Economics from Cornell University. He is the coordinator of Cooperatives and Self-employment Department, Naya Shakti Nepal

Jatayu got their big break from the cover of Ed Sheeran’s Shape of You that they uploaded on their self-titled... Read More...

“Mummy, my friend has called me to visit Pashupatinath Temple”, I said. I was very eager to visit the temple... Read More...