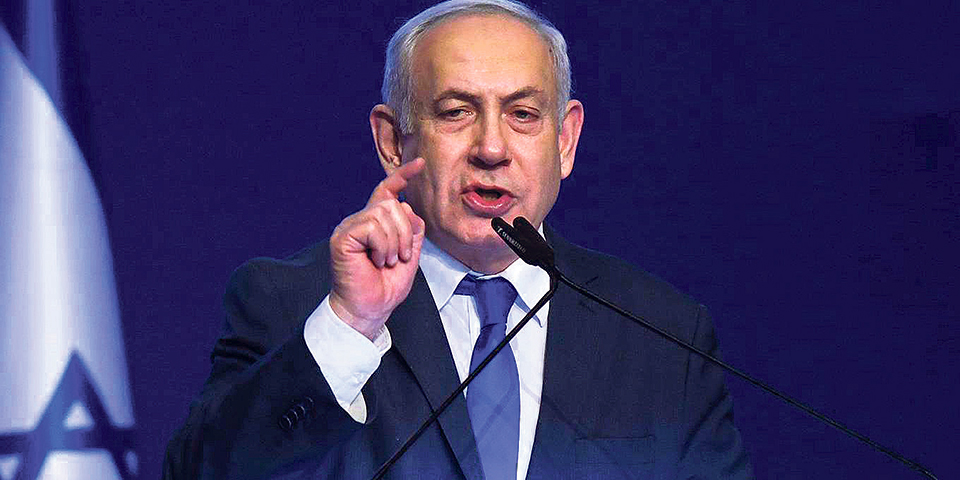 For most Israelis, a vote for Prime Minister Binyamin Netanyahu was a vote not for an indicted politician, but for a strong leader with a clear vision

TEL AVIV – Israel’s third electoral showdown in a year was not kind to Prime Minister Binyamin Netanyahu. Even though his right-wing bloc of ultra-Orthodox and nationalist parties won more seats in parliament than the center-left bloc headed by former army chief Benny Gantz, he still lacks the parliamentary majority required to form a government. This result does not bode well for Israeli democracy.

Israel may well be trapped in limbo for months to come. Netanyahu’s 58-seat bloc is a cohesive and coherent alliance, unlike the 55-seat opposition bloc. Comprising Gantz’s Blue and White coalition, the Labor-Meretz Alignment, and the Joint List alliance of Arab-majority political parties, the latter could hardly serve as the basis for a new government, even if it held a majority of the Knesset’s 120 seats.

The Gantz-led bloc could nonetheless still prevent Netanyahu from forming a government, especially if Avigdor Lieberman—the leader of Israel Our Home, which won seven seats— sticks to his pledge never to join the Likud-led coalition. But one wonders whether a self-proclaimed enemy of the Arab-Israeli “fifth column,” who has advocated transferring Israel’s Arab citizens to a Palestinian state, would ever side with an opposition that includes the Arab Joint List.

Whatever the outcome, the vote has sent a sobering message about the state of Israeli democracy. With Netanyahu facing trial for bribery, fraud, and breach of trust, the fact that he has even come close to winning a record fifth term in office is deeply troubling. And yet, in some ways, it is the natural upshot of Netanyahu’s nearly 15 years of systematically subverting Israel’s democracy.

Israeli politics are notoriously red in tooth and claw. And yet Netanyahu’s most recent electoral campaign may have been one of the dirtiest in its history. He shamelessly smeared Gantz and the liberal media, flagrantly propagating fake news, malicious leaks, and unsubstantiated rumors. He unapologetically pitted Jews and Arabs against each other. And he lambasted the law-enforcement officials whom he himself had appointed, claiming that their efforts to hold him accountable for his crimes amount to an “attempted coup.”

Now Netanyahu will probably use his slight edge in parliament to claim that any attempt by the judiciary to prevent him from forming a new government defies the “will of the people.” And which people are those? Not the “liberal elites” who are largely responsible for Israel’s spectacular innovation-led economic growth. Netanyahu’s “people” are those who feel unrepresented and neglected.

For a leader who has been in power for over a decade, this is quite an achievement. After all, it was under Netanyahu that Israel’s transportation, education, and health-care systems have deteriorated. Given hospital overcrowding, for example, Israel has by far the worst mortality rate from infections among economically advanced countries (38 deaths per 100,000 patients).

But Netanyahu has proved to be a master of exploiting ethnic nationalism. More interested in “Jewish values” than democratic niceties, Israel’s “neglected” voters—including two out of three Jewish voters—embraced his campaign’s anti-Arab rhetoric and condemnation of the liberal elites’ laicism. They appreciated his well-defined and unapologetic approach to subduing the Palestinians, whose land he plans to annex by unilaterally implementing the deeply biased peace plan recently unveiled by US President Donald Trump’s administration.

In fact, Netanyahu has always stood proudly on the twin pillars of his platform: unrelenting opposition to Iran and obliteration of the Palestinian national movement. Most Israelis support both objectives.

Meanwhile, the ideologically amorphous opposition bloc has provided little clarity on its own approach to these issues. Though Gantz has opposed unilateral annexation of Palestinian territories, he has committed to annexing the Jordan Valley region of the occupied West Bank. Moreover, his Blue and White party has called Trump’s plan “entirely consistent with the principles of state and security” that the party espouses.

It is the center-left bloc’s weakness, even more than Netanyahu’s cynical political manipulation, that shaped the latest election results. Rather than offering a credible alternative to Netanyahu’s ambitions, the bloc based its entire campaign on the indicted prime minister’s challenges to the rule of law—an issue about which Netanyahu’s constituents simply don’t care.

For most Jewish voters, a vote for Netanyahu was a vote not for an indicted politician, but for a strong leader with a clear vision. Even the townships surrounding Gaza—which Netanyahu had failed to protect from periodic missile attacks by Hamas—preferred Netanyahu over Blue and White, which is led by three former army chiefs.

If Netanyahu manages to form a government, he will probably feel that he has carte blanche to continue pushing Israel toward autocracy. Among the first orders of business will probably be bringing the judicial system to heel, much like Turkish President Recep Tayyip Erdogan and Poland’s right-wing populist government have done in recent years.

There remains one political force in Israel that does still seek to uphold the cause of peace and justice: the Joint List. Israeli Arabs—galvanized by Trump’s proposal to transfer the citizenship of 300,000 of them to the Palestinian state—flocked to the polls, making the Joint List the only party on the left to make electoral gains. (It now holds 15 seats in parliament, up from 13.)

Blue and White lacked the political courage to defy Zionist parties’ prohibition of cooperation with the Joint List. Yet the Zionist left, too, lacks a convincing message, and is fading into irrelevance as a result. It won only seven seats in this election—a four-seat loss. This leaves the Joint List as the only true opposition to Netanyahu’s policies of annexation, racist discrimination, and sheer Machtpolitik.

This is the true, historic message of this election. If a battle for Israel’s soul is unfolding today, it is between Netanyahu’s far-right coalition and the Arab Joint List, not the Jewish left or the centrist Blue and White. Liberal Zionists will be able to stem the rising tide of unbridled nationalism only through an unapologetic alliance with Israeli Arabs.

No country for Palestinians

AMMAN – A bizarre election campaign is heating up in Israel. The incumbent Prime Minister, Binyamin Netanyahu, has become the... Read More...