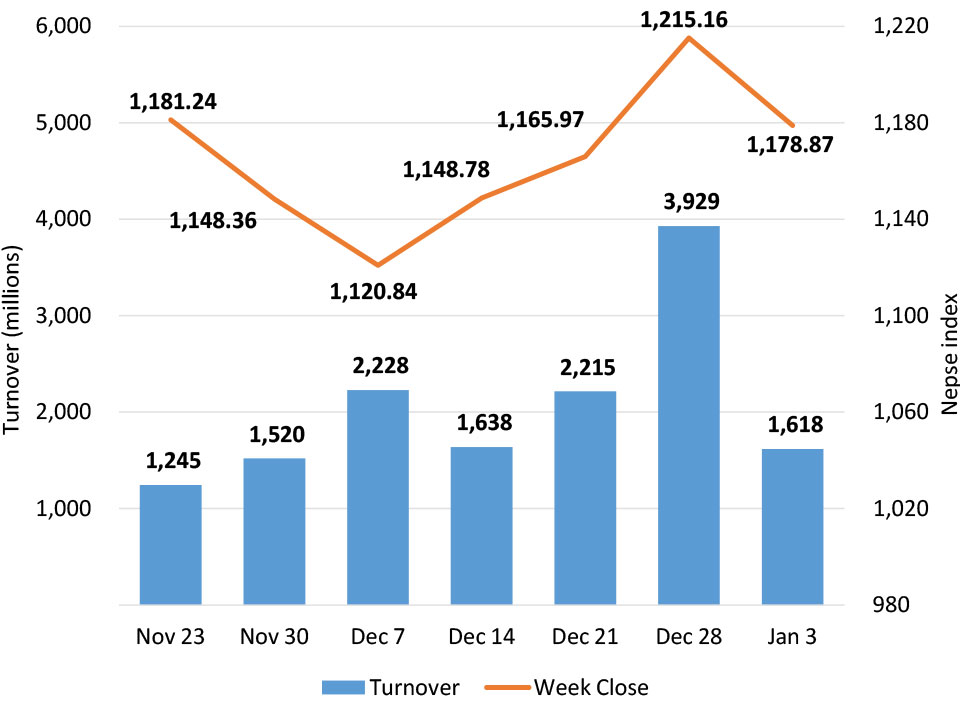 KATHMANDU, Jan 5: Nepalese stocks struggled throughout the week as the Nepal Stock Exchange (Nepse) index turned red in all five trading sessions. Trading began on Sunday with a drop of more than 10 points in the index followed by a further loss of over 17 points on Monday.

Eventually, Nepse posted a weekly loss of 36.29 points or 3 percent to close the review period at 1,178.87 points. The retracement in the overall equity market came after the index surged for three straight weeks in the month of December. The drop in the index can also be attributed to shareholders' book closure by most of the major companies in the previous weeks.

A number of heavyweight banks are due to convene their Annual General Meetings (AGMs) in the month of January with dividend approval as key agenda among others. Subsequently, the bourse, which witnessed active market participation towards the end of December, posted relatively insipid trading sessions this week. Total weekly turnover fell substantially to Rs 1,617 million against almost Rs 4 billion in the week earlier.

Class 'A' stocks underperformed in the review period as reflected by a 3.32 percent drop in the Sensitive index. Further, most of the traded sectors followed the broader market and posted moves to the downside.

Only Hotels and Manufacturing & Processing stocks beat the Nepse index as the respective sub-indices closed marginally higher this week. 'Others' sub-index posted the biggest loss of 6.38 percent dragged by shares of Nepal Telecom Ltdwhich tanked over 8 percent. The largest company by market capitalization, nonetheless, is due to distribute 55 percent cash dividend to its shareholders. Similarly, Life Insurance sub-index pulled back sharply following substantial gains in the previous weeks. The sub-index dropped 3.25 percent. Heavyweight banking stocks also struggled with the Banking sub-index posting a decline of 3.09 percent.

As per the ARKS weekly technical analysis, the index formed a bearish candlestick on the weekly timeframe erasing most of its gains from the previous week.

This week's drop can be taken as a correction, while further confirmation is needed in the following weeks to gauge the overall direction of the market. Weekly Relative Strength Index has slightly tilted downwards and Moving Average Covergence Divergence is still trending below the neutral line.

Hence, market sentiment remains marginally bearish in the present context. A breach of 1,240 points on the upside might see the index climb further.

KATHMANDU, Jan 11: The local bourse witnessed a choppy trading session in the last trading day of the week. The... Read More...