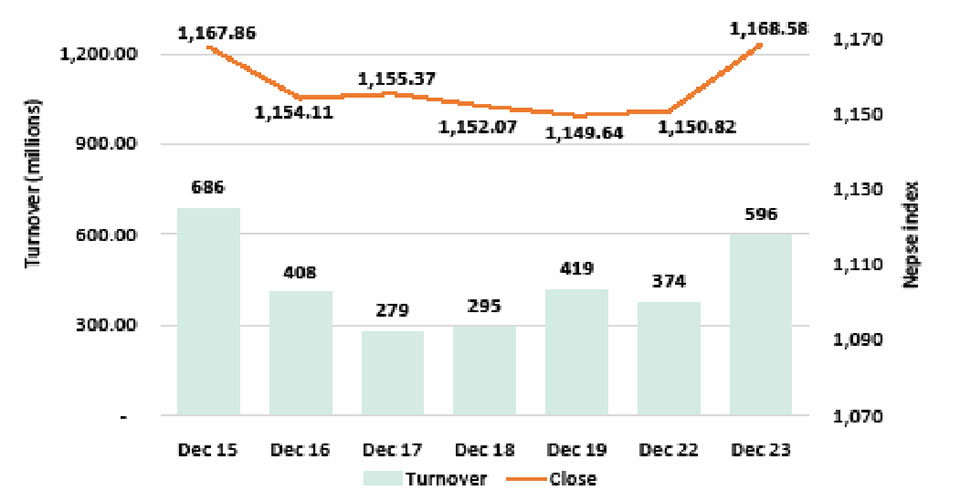 KATHMANDU: Following some of the least volatile week, the major benchmark ended roughly where it started. The Nepal Stock Exchange (Nepse) index kicked off the week's trading with a drop of 5 points on Sunday but erased all the losses on Monday closing over 5 points higher.

Tuesday was marked by a minor loss of 2 points. Subsequently on the New Year's Day, the index rose 3.47 points, while the last trading day of the week witnessed a loss of 3.29 points. Eventually, Nepse closed the week with a minor decline of 1.2 points or 0.1 % at 1,166.21 points.

A rally which began in early December lost its steam towards the month's end but the equity index managed to hold the gains heading into the New Year where the bourse is taking a more composed stance. However, some indecision is still visible as reflected by a cooled buying appetite showed by investors.

Further with second quarter end approaching, the interest payment deadline as well as tax payment by businesses might slightly weigh on the broad market in the coming sessions. Meanwhile, weekly turnover dropped by 15 % against the week earlier to Rs. 2,392 million.

Sensitive Index, which measures the movement of Class 'A' stocks, took a slightly bigger knock as it sank 0.86 %. Sectors closed the week mixed. Trading sector outperformed the market notably with shares of Salt Trading Corporation hitting its fresh high crossing Rs. 2,000 per share for the first time. The group's sub-index shot up by 12.66 %.

On the other hand, 'Others' segment was the major laggard of the week, dragged by a decline in shares of Nepal Telecom Company Ltd. The telecom provider closed its shareholder's book this week which resulted in shareholders selling their shares after realizing its cash dividend. Finance sector also sank 1.15 %. Banking, Hydropower and Non-Life Insurance sub-indices saw modest losses.

In the week, Himalayan General Insurance Ltd announced its dividend for the Fiscal Year 2018/19. The non-life insurer has proposed 5 % bonus shares and 5.5 % cash dividend. Following the news, its share price dropped slightly.

ARKS technical analysis indicates the market forming a doji candlestick on the weekly timeframe reflecting buyers and sellers negating each other putting the index roughly at equilibrium in the review period. Hence, a clear direction is yet to be observed in the bourse despite the overall sentiment remaining bullish.

On a positive note, Weekly Moving Average Convergence Divergence (MACD) line has formed a golden cross which mostly indicates further upward movement likely. Given the benchmark index breaks out and holds ground above 1,180 points resistance, the index will likely see another surge to 1,220 points mark.

KATHMANDU: Stocks opened on a positive note on Tuesday as the major average saw a steady rise in the first... Read More...