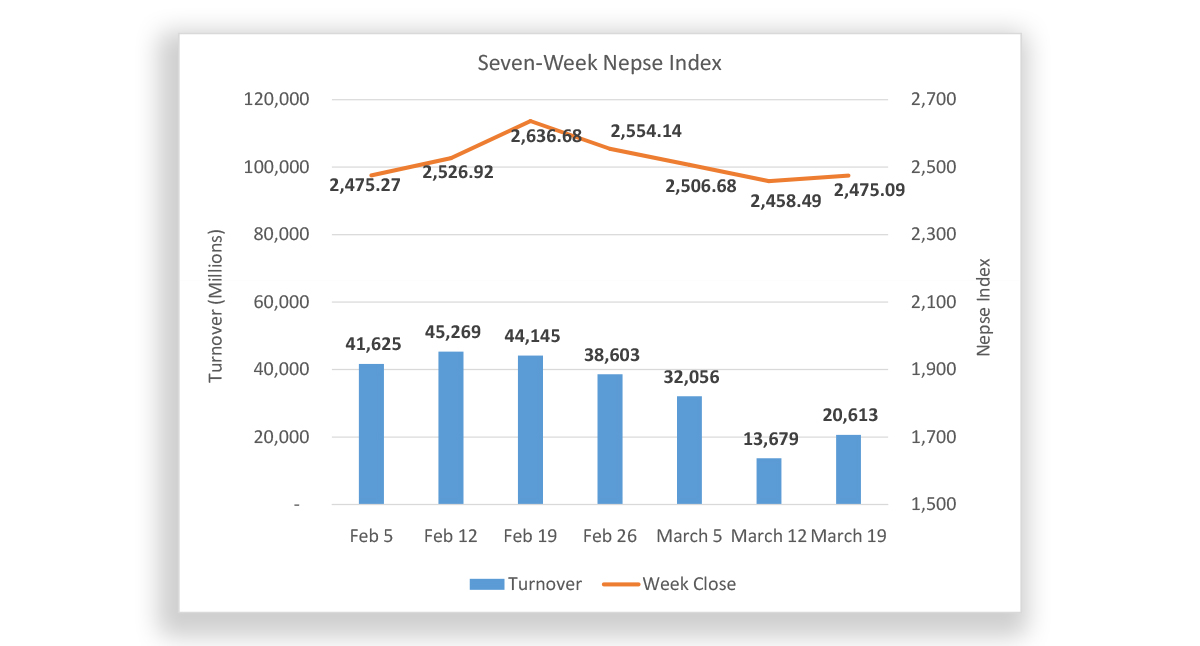 KATHMANDU, March 19: The Nepal Stock Exchange (Nepse) index witnessed a notable dip with the index sinking 51.23 points on Sunday followed by an 18.07 points decline on Monday. While the index remains unchanged on Tuesday’s trading and closed by a slight increment of 2.22 points. Whereas the market found some footing on Wednesday and Thursday’s trading with a gain of 40.41 points and 42.94 points respectively. Eventually, the index ended the review period 16.6 points or 0.68% higher at 2475.09.

This week the market test the psychological support level of 2370 and managed to trade above this mark. In the last two trading days, it looks like the selling pressure has eased off since most of the companies are trading in its lower price range. However, the market is yet to show signs of notable up momentum as volumes have weakened up in the current trading sessions. Over Rs. 20 billion worth of securities were exchanged this week.

Sensitive Index declined by 1.09 points. Among sectors, Hotels and Tourism segments led the broader market’s advance and rallied over 19.28%. It is due to Chandragiri Hills Ltd’s shares which have continued to hit the upper circuit limit for the third straight week. Manufacturing & Processing, Microfinance, Life Insurance and Hydropower sectors followed suit with gains of 3.73%, 3.03%, 2.71% and 2.40% respectively. Investment, Finance, and Development sub-indices also ended in green with a meager increment. On the other hand, the trading index pulled back and ended 5.77% lower. Likewise, others and Non-Life Insurance sub-indices the decline by 3.36% and 1.72% respectively. Banking and Mutual Fund sectors ended in red with a meager decrement.

On the technical front, the index formed a hammer candlestick suggesting potential reversal to the upside. Likewise, the index has maintained above 5-day Exponential Moving Average suggesting the uptrend is still intact in the current context.  Similarly, the index tests the 2370 psychological mark on mid-week and succeeded to close above the aforementioned mark. Whereas the immediate resistance lies at the 2550 mark. If the market cross above 2550 points with heavy volumes will point towards the upper trend.

KATHMANDU, March 9: The equity market began the trading day on the upper side of the spectrum, but quickly dragged... Read More...

Nepse up marginally as investors look past political unrest

KATHMANDU, Feb 4: A sharp sell off early in the morning pushed the local benchmark more than 20 points lower... Read More...

Gold price increases by Rs 500 per tola
41 minutes ago