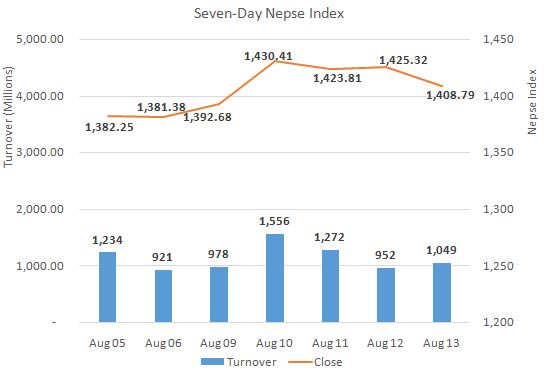 KATHMANDU, Aug 14: After witnessing a steep drop in the morning, the Nepal Stock Exchange (Nepse) index traded over 10 points lower at mid-day. The local bourse tried to recoup earlier losses in the afternoon, but lost its footing further towards late afternoon. At the close, Nepse closed at 1,408.79 points – down by 16.53 points against the session earlier.

While the index closed flat on Wednesday, the last trading day of the week saw bears dominate the day’s session. Confidence of investors took a hit as few major banks reported a drop in their earnings in the fourth quarter. However, despite Thursday’s decline, the index ended the week over 28 points higher. Turnover remained close to par with over Rs 1 billion worth of securities exchanged on the day.

Heavyweight banks led the day’s decline as the group’s sub-index fell 1.34 percent. Manufacturing & Processing segment also struggled, shedding 1.19 percent on the day. Microfinance, Life Insurance and Non-Life Insurance sub-indices followed the suit with a  loss of over 1 percent each. All other sectors closed the day in the red barring Trading sub-index, which eked out a marginal gain.

In the major news, Nabil Bank Ltd published its fourth quarter financial report of the year 2019/20. The heavyweight commercial bank reported a drop in its net profit to Rs. 3.57 billion, against Rs 4.24 billion in the year earlier. Similarly, Citizens Bank International Ltd saw its earnings drop by over 23 percent year-on-year to Rs 1.11 billion. Meanwhile, NLG Insurance Company Ltd reported a 15 percent growth in its net profit as per its fourth quarter financials.

On the technical front, the index formed a bearish candlestick suggesting some correction in action. Both Relative Strength Index (RSI) and Moving Average Convergence Divergence (MACD) show neutral sentiment in the current juncture. On a positive note, the index has managed to maintain its ground above 1,400’s level, which can act as a strong psychological support. Meanwhile, the index may face immediate resistance at this week’s high of 1,430 points mark.

KATHMANDU, Feb 25: Despite an early attempt by the bourse to stretch its rally, gains remained truncated throughout Monday's trading... Read More...