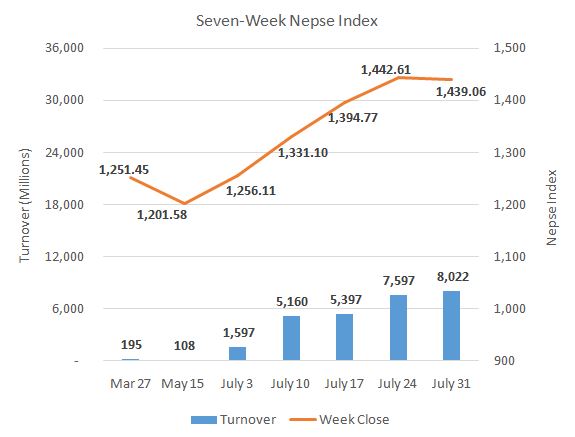 KATHMANDU, July 31: The local stock market witnessed upbeat trading on the first trading day of the week. On Sunday, stocks closed firmly higher as the Nepal Stock Exchange (Nepse) index added 1.56 percent. However, the buying pressure receded on Monday as the index pulled back a meager 0.18 percent. The exchange accelerated losses on Tuesday and Wednesday with declines of 0.52 percent and 1.61 percent, respectively, while Thursday was marked by a modest gain of 0.53 percent. Eventually, the index ended at 1,439.06 – down 3.55 points or 0.25 percent against the week earlier.

Stocks had been soaring since the resumption of trading at the end of June. Consequently, investors enjoyed four straight weeks of decent upward movement. As all sectors now have recovered most of their losses compared to the average February price level, the trend remains firmly bullish. Hydropower stocks, which were the laggards till the prior week, have also shown considerable strength, with many cheap hydropower stocks rallying 10 percent at the end of this week. Besides, excess liquidity and lower interest rate has continued to prevail as demands for loans for investment have dropped sharply following the COVID-19 pandemic. This has also been a major factor driving investment towards the secondary market. Meanwhile, the weekly turnover has continued to see a steady rise. Over Rs 8 billion worth of stocks were traded in the week on review.

Class 'A' stocks' group underperformed as its gauge Sensitive index fell 0.97 percent. As per sectoral performance, most of the sub-indices ended in negative territory. Only 'Others', Life Insurance, Finance and Mutual Fund sub-indices managed to close the week higher. Hotels sector corrected sharply as the sub-index fell 5.01 percent. Next, Trading and Manufacturing and Processing sub-groups suffered and fell 2.68 percent and 1.77 percent, respectively. Development Bank sector fell 1.31 percent and Non-Life Insurance sub-index dipped 0.87 percent. All other sectors inched lower.

In the week, 10 million units of Ajod Insurance Ltd's primary shares were listed in the exchange. However, the insurer's shares didn't see any movement as the initial price was not set in any of the special pre-opening sessions. Opening price range was stated between Rs 97 and Rs 291. However, since the price level of buyers and sellers didn't match for any orders, the stock couldn't mark its opening price.

As per the ARKS technical analysis, the market formed a small spinning top candlestick on the weekly timeframe reflecting indecision in the week after sustained four-week rally. Consequently, trading range has stayed relatively truncated as volatility has subsided fairly. Technical indicators meanwhile suggest buying pressure yet to subside with some sideways or upward movement on the cards. On the other hand, immediate support lies at 1,420-point mark where its breach might see the index falter toward 1,350 points.