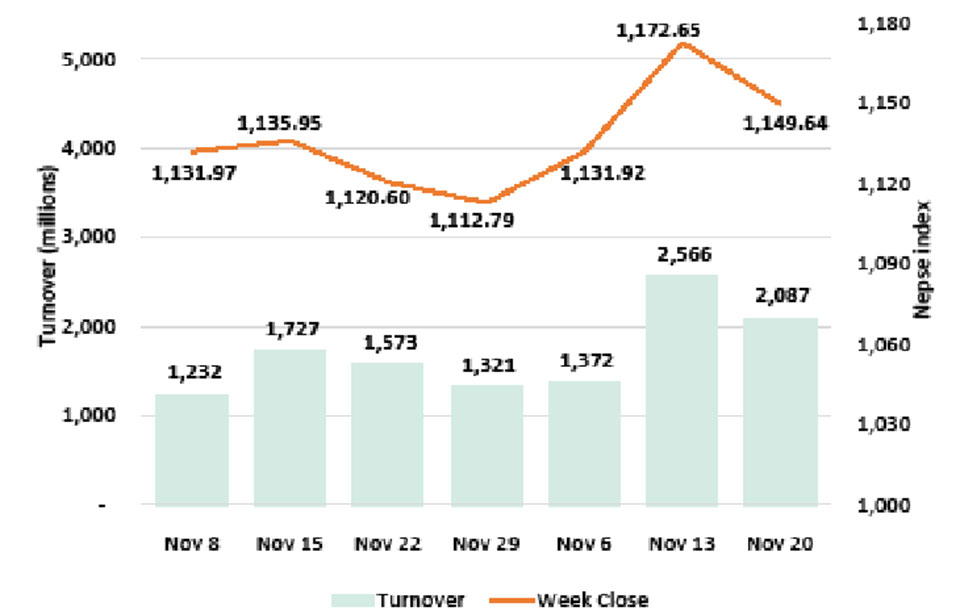 KATHMANDU: After a sustained 8-session rally in the prior weeks, the week's trading kicked off Sunday on a positive note reaching as high as 1,182 points in the morning. But the tussle between buyers and sellers on the day pushed Sunday's volatile trading in red. In the session, Nepal Stock Exchange (Nepse) index fell a moderate 4.79 points. Losses stretched further on Monday with a drop of 13.75 points. The selling pressure eased slightly on Tuesday with the index adding 1.26 points. Wednesday and Thursday posted declines of 3.3 points and 2.43 points, respectively. Overall, the index witnessed a 23.01 point or 1.96% correction to settle at 1,149.64 points.

This week, short-term profit booking in insurance and microfinance stocks dragged the index down, erasing most of the previous week's gains. Nonetheless, Nepse still stands almost 40 points higher in the month of December so far. Hence, the retracement can be taken as a short-term consolidation unless another drop in the secondary market is seen. Following a relatively volatile first half of December, investors are now maintaining a watchful stance with the market yet to indicate a clearer picture in terms of possible movements. Week-to-week turnover dropped 23% to Rs 2,087 million.

Sensitive Index, measuring the performance of Class 'A' stocks, also followed the broader Nepse index with a loss of 1.47%. On the sectoral movement, insurance averages were hard hit. Life Insurance and Non-Life Insurance sub-indices both fell over 5% each. Hotels sub-index closely followed and closed down by 4.89%. Hydropower and Microfinance sub-indices, meanwhile, slumped over 3% each. Banking sector also witnessed a drop of almost 1%. Besides, all other sectors registered modest losses, barring Trading sub-index which rallied over 10% in the week.

NMB Bank Ltd's shares were traded the most in the week. The bank closed its shareholders book on Friday for the purpose of convening its annual general meeting (AGM) where it will endorse the agenda to endorse 21% bonus shares and 14% cash dividend. Next, Nepal Bank Ltd witnessed a turnover of Rs 107 million followed by Nepal Life Insurance Company Ltd and NIC Asia Bank Ltd which posted transactions of at least Rs 72 million apiece. Shivam Cements Ltd, Nabil Bank Ltd and Prime Commercial Bank Ltd were among other actives of the week.

In the news, Nepal Finance Ltd resumed trading in the exchange after 5 years since Nepal Rastra Bank (NRB) declared the financial institution crisis ridden citing bad loans of more than half of the credit portfolio and negative capital adequacy ratio among others. Nonetheless, after the NRB released the bank from problematic status this week, Nepal Finance Ltd has seen major buying pressure in the week with its share price hitting upper circuit in three consecutive days.

In terms of ARKS technical analysis, the market formed a bearish dark cloud pattern on the weekly timeframe which indicates selling pressure prevailing in the market. Given the market forms another bearish candlestick in the following week the southbound movement will likely be substantiated. On a positive side, the support of 1,150 has still held ground where a rebound might see the index post another upward movement.

Nepse up for a fourth straight session

KATHMANDU: After a brief rise early in the morning, the Nepal Stock Exchange (Nepse) index pulled back sharply and shed... Read More...

KATHMANDU: Stocks traded flat for most of Sunday's trading session and wavered around 1,166 points till mid-session. ... Read More...