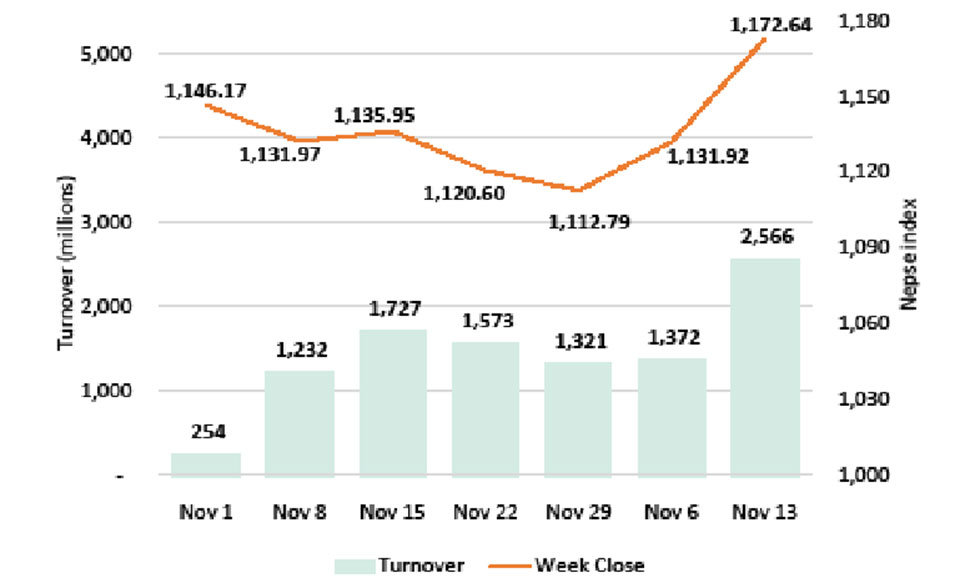 KATHMANDU: Local stocks saw significant strength in the week as the Nepal Stock Exchange (Nepse) index closed all five trading days in green. The benchmark index opened the week's trading with a modest gain of 3.46 points. On Monday, the index rallied 13.51 points, while Tuesday saw a gain of 2.48 points. The index stretched its gaining streak further towards the end of the week.

The week's surge saw the exchange witness its best week since late April. The index had been witnessing consolidation since mid-September, with investors refraining from trading actively. In the period, the index remained confined within a narrow range between 1,110 and 1,160 points accompanied by dismal daily turnover. However, this week, investors stayed enthused to buy stock at some of the cheapest levels pushing both the broader index as well as turnover notably higher. Market activity almost doubled against the week earlier with total turnover at over Rs 2.5 billion.

Class 'A' stocks also mirrored the broader market with the Sensitive Index rising 2.75%. On the sectoral front, mainly insurance and microfinance sub-indices led the week's surge. Non-Life Insurance sub-index shot up by over 13% as all component stocks saw major strength in the week. Trading segment also rallied 13.26%. Life Insurance and Microfinance segments, similarly, turned in some of the best performances of the week with both sub-indices closing over 7% higher. Hydropower sub-index jumped 4.59% followed by Hotels and Development Bank sub-indices which climbed over 3% higher each. Heavyweight Banking sub-index posted a gain of 2.20%. All other sectors inched higher, barring Manufacturing & Processing segment which fell 2.80%.

In terms of stock wise turnover, shares of NMB Bank Ltd posted the highest turnover of the week. More than Rs 139 million worth of the bank's shares changed hands. Next, Deprosc Laghubitta Bittiya Sanstha Ltd registered a turnover of nearly Rs 100 million. The microfinance announced its dividend for the year in the week. It has declared 30% stock dividend and 15% cash payout to its shareholders. Similarly, Nepal Bank Ltd posted a total transaction of Rs 92 million. Machhapuchhre Bank Ltd, Swabalamban Laghubitta Bittiya Sanstha Ltd and Nepal Life Insurance Co. Ltd were among other actives with turnovers of at least Rs 80 million apiece.

On Friday, Prabhu Insurance Company Ltd became the first among its counterparts to announce dividend for Fiscal Year 2018/19. The insurer will be distributing 5% bonus shares and 11.32% cash dividend to its shareholders following approval from Insurance Board and its annual general meeting (AGM). The company had distributed 19.2% bonus shares for the year 2016/17, while it did not announce any dividend for the year 2017/18.

KATHMANDU, July 5: The fear of decline carried over to Sunday’s trading session initially. In the first few minutes of... Read More...

KATHMANDU: Indecision prevailed in the initial trading days of the week as flat trading marked Sunday and Monday's sessions. The... Read More...