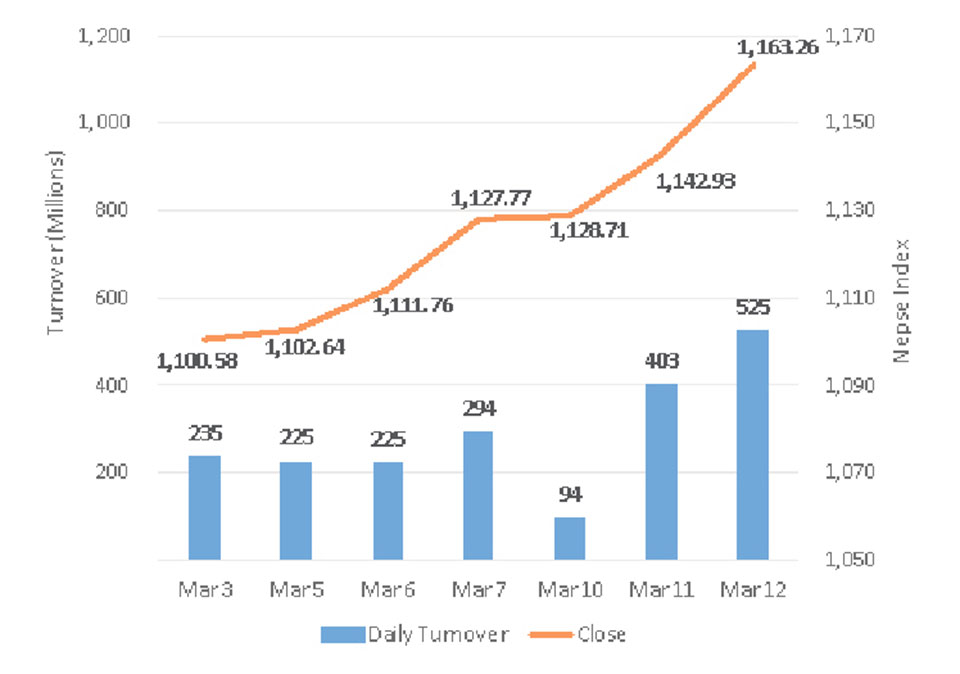 The benchmark index climbed more than 7 points in early trading, but gave up most of its gains within the first trading hour. Nonetheless, the index progressed throughout the remaining trading hours to close the day above 1,160-point mark.

Further, the local bourse turned in some of its longest winning streaks as the index closed in green for the sixth straight trading day. Despite some minor pullbacks, buyers remained dominant throughout the session. The recent rebound from 1,100-point mark has provided some impetus to investors to take long-term position as most of the scrips are trading close to their lowest levels. Market participation also improved on the day as the exchange recorded a turnover of over Rs 527 million.

Among advances, hydropower stocks turned in some of the best performances of the day. Synergy Power Development Ltd hit the upper circuit of 10 percent. Likewise, share prices of Support Microfinance Bittiya Sanstha Ltd and Himalayan Power Partner Ltd surged by over 9 percent each. Other top gaining scrips of the day were Kalika Power Company Ltd, Sanima Equity Fund and National Hydropower Company Ltd with advances of 8.79 percent, 7.46 percent and 7.25 percent, respectively.

Citizens Mutual Fund-1, on the other hand, posted a decline of almost 2 percent on its unit price. Share prices of Sagarmatha Insurance Co Ltd, Nirdhan Utthan Laghubitta Bittiya Sanstha Ltd, Ankhu Khola Jalavidhyut Company Ltd and Best Finance Company were also down by over 1 percent each. Share price of only eight companies went down on Tuesday.

In the news, Reliance Finance Ltd has declared a cash dividend of 2.63 percent from the earnings it posted in Fiscal Year 2017/18. The decision, however, is subject to approval from its Annual general Meeting (AGM). The finance company had announced 12 percent bonus shares last year. However, the company is yet to hold its AGM for the previous year to endorse the announcement.

As per the ARKS technical analysis, the index formed a bullish candlestick reflecting buying pressure in the market. Meanwhile, as the index has breached the resistance of 1,160 points, a further surge above this level might see the index climb to 1,200-point mark. Technical indicators also indicate marked bullish sentiment prevailing in the present context. A breakout from 1,200 points would further validate the market's recovery from the long-term downtrend.

Nepse up 19 points as stocks rally