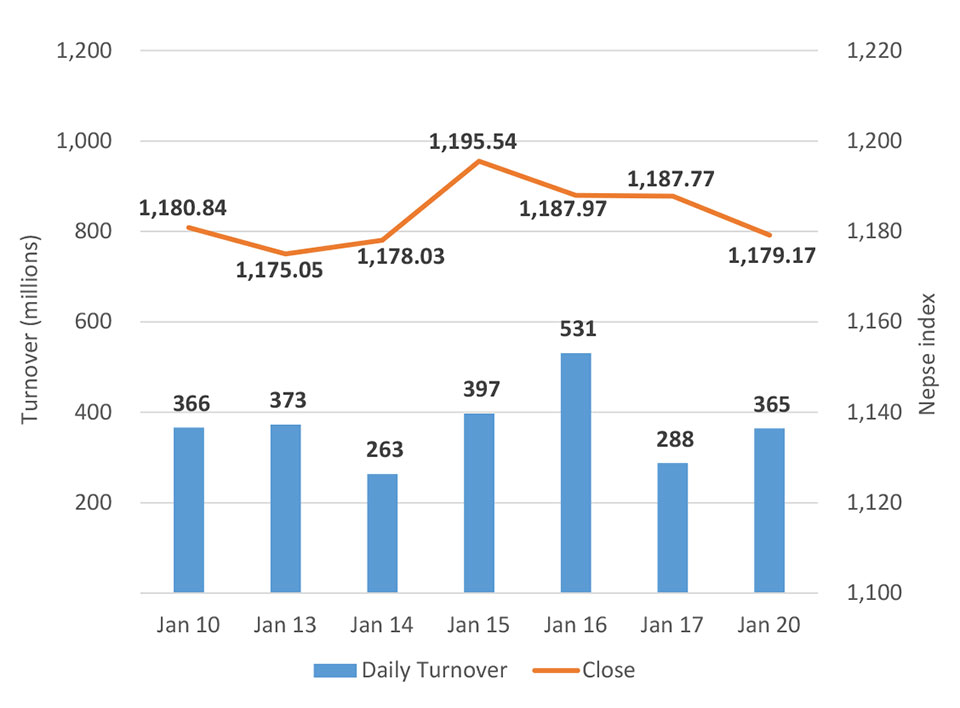 KATHMANDU, Jan 21: The benchmark equity index opened Sunday's trading slightly higher. After trading flat for the initial trading hour of the day, the local exchange came under pressure thereafter. Consequently, the Nepal Stock Exchange (Nepse) traded in the red throughout the latter trading hours. Eventually, the index closed the week at 1,179.17 points – down 8.60 points against the day earlier.

The day's drag came on the back of shares of Upper Tamakoshi Hydropower Ltd ending in the red after hitting the upper circuit for three consecutive days in the previous week. The hydropower company, whose market capitalization reached Rs 32.93 billion after Thursday's trading, had a major impact in the market cap based Nepse index following the day's slump.

Further, trading in the day also remained affected by intermittent glitches in the Nepse's website, contributing to a low turnover trading session. The bourse posted a total transaction of over Rs 364 million on the day.

Most of the major sectoral indices moved southbound, while only Trading, Hotels and Finance sub-indices managed to end the day higher. Maximum losses came from Hydropower sub-index reflecting the slump seen in shares of Upper Tamakoshi Hydropower Ltd.

Meanwhile, 'Others' sub-index posted a loss of over 1 percent. Development Bank sub-index fell 0.76 percent followed by sub-indices of Non-Life Insurance and Life Insurance segments with declines of around 0.6 percent each. Sub-index of heavyweight banking stocks also closed marginally lower.

Shares of Upper Tamakoshi Hydropower Ltd were actively traded in the day. The energy sector scrip alone accounted for more than 60 percent of the day's total turnover with a total transaction of over Rs 234 million.

In the news, Deva Bikas Bank Ltd reported a 5.48 percent year-on-year decline in its net profit. As per its second quarterly report of fiscal year 18/19, its net profit dropped to Rs. 133 million against Rs. 141 million in the corresponding quarter previous year.

As per the ARKS technical analysis, the market formed a bearish candlestick for a third consecutive session indicating sellers' dominance of late.

Technical indicators also suggest fading momentum in the short run. Nonetheless, the equity index is trending around its support at around 1,170 points mark. Hence, the activity around this level needs to be cautiously monitored before taking any major positions of either type.

This column is produced by ARKS Capital Advisors Ltd
www.arkscapitaladvisors.com
(Views expressed in the article are those of the producer and do not necessarily reflect those of this publication)

KATHMANDU, Jan 6: The domestic share market was hit by a fall of 7.22 points in the opening day of... Read More...