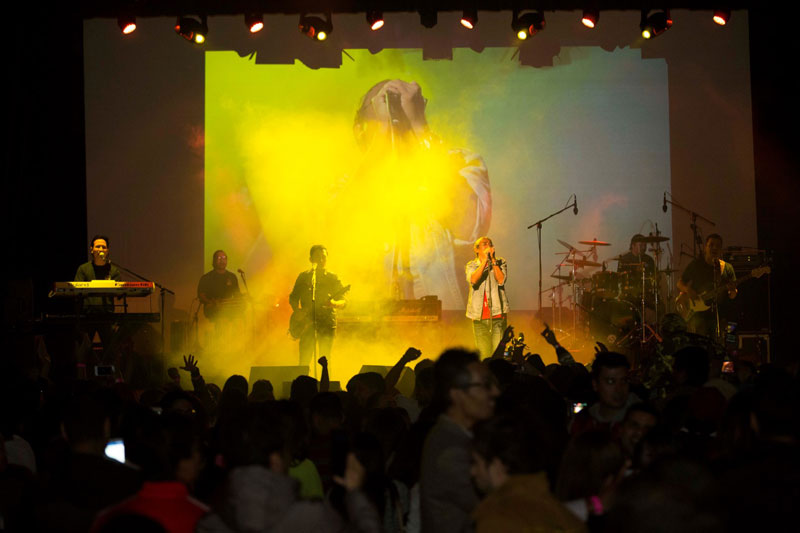 Compared to Melbourne and Sydney, Adelaide has a smaller population of Nepalis. However, nepa-laya, the management company for Nepathya, said that amongst the almost 3000 Nepali residents in Adelaide, almost 30% turned up for the show.

“It is always fascinating to witness the Nepathya factor unifying Nepalis where ever they go.” said Khum Gurung of the organizing team.

“During Nepathya’s 2012 concert at the Sydney Town hall, I was amongst many who could not enter the Nepathya concert venue due to a sellout show. It was in fact, amazing to see traffic being stalled and policemen in large numbers outside the venue for a Nepali show at the Town Hall. Apparently, hundreds had to return, barred from entry as the venue was packed to its capacity” recalled Khum. “I am glad no one had to return from Norwood Hall, as we had arranged for a decent size venue and I am glad people came in such numbers to witness the 25 years celebration of Nepathya.”

Norwood Concert Hall is a historic landmark in Adelaide, with a clock tower and a history of over 100 years.

Nepathya’s recent released video – Gharko Kura was also screened as a prelude to the show. As the concert progressed, the mood at the venue was heating up with folk tune filled Sirfula to sentimental hit Yo Zindagani and the audience swayed and sang with Amrit Gurung, the front man of Nepathya.

Amrit was accompanied by Dhruba Lama on drums, Suraj Thapa on Keyboards, Subin Shakya on bass, Niraj Gurung on guitars and Shanti Rayamajhi on percussion.

The band now moves on to Sydney for their show at the Big Top Auditorium in Luna Park scheduled for July 22.

The second show of the ongoing Nepathya Australia Tour was staged at the Norwood Concert Hall in Adelaide on Sunday.... Read More...