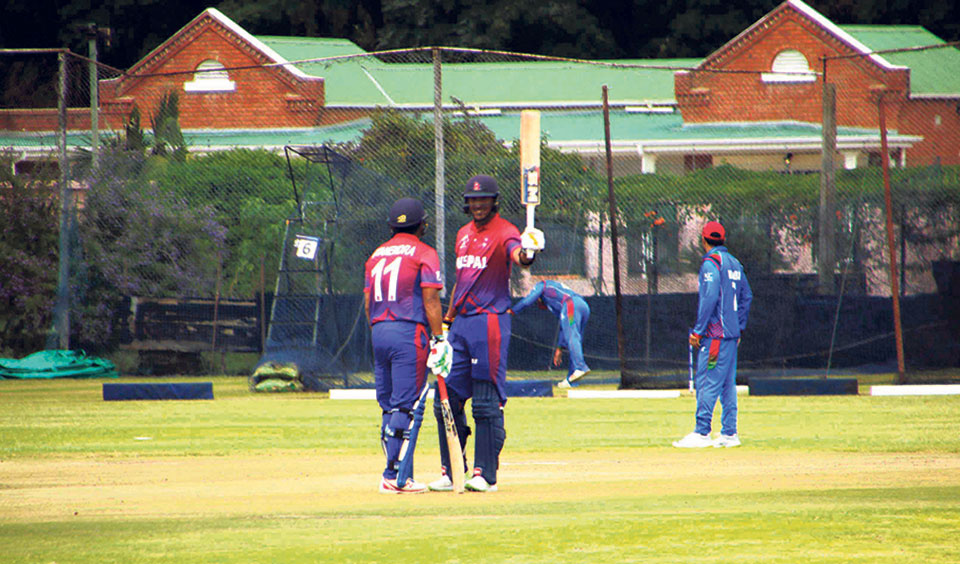 KATHMANDU, Mar 11: Nepal’s hope of advancing into next round of ICC Cricket World Cup Qualifiers has taken significant dent after a six-wicket loss to Afghanistan at Bulawayo Athletic Club, Zimbabwe on Saturday. Nepal will have to beat Hong Kong by a big margin to keep the hope of qualification alive. Similarly, Afghanistan will bank on Nepal to beat Hong Kong to advance into next round based on better net run-rate than the two teams.

Afghanistan boosted their net run-rate to 0.038 winning the match with 11.2 overs to spare. Nepal’s net run-rate has taken another bump after their third loss in a row with -1.546 on the points table. If Nepal wins the match against Hon Kong, three teams will be on two points and the team with better net run-rate will advance.

In a surprise move during the chase, Afghanistan Skipper Rashid Khan promoted himself as an opener smashing his way to 21 runs from 14 deliveries giving a brisk start of 28 runs in 5.2 overs. He was dismissed by Nepal’s pace bowler Karan KC. A firm partnership between Javed Ahmadi and Rahmat Shah followed adding 65 runs in next 17 overs before Sandeep Lamichhane made the breakthrough holding on to a catch of his own bowling. Ahmadi was dismissed for cautious 26 runs from 54 deliveries. Shah soon followed on the score of nelson figure clean-bowled by sixth Nepali bowler of the day Dipendra Singh Airee on the individual score of 46 runs from 75 deliveries.

A brisk 39 runs partnership between Mohammad Nabi and Najibullah Zadran followed before Airee claimed his second wicket of the day. Nabi, batting at number 4, made 34 runs from 32 deliveries including two boundaries and a six before holding out to Gyanendra Malla.

With a sniff of chance at 150 for the loss of four wickets, Najibullah then launched a counter-attack against Nepal’s veteran bowler Basant Regmi in his way to unbeaten 52 runs. He faced 47 deliveries and smashed four boundaries and three sixes, two of them came in 36th over bowled by Regmi. Afghanistan completed the chase in unbeaten 45 runs partnership for 5th wicket between Najibullah and Samiullah Shenwari. The latter remained not out on eight runs keeping Afghanistan’s hopes alive for Super Sixes qualification if Nepal goes on to defeat Hong Kong on Monday.

Airee picked up two wickets in the match while Sompal Kami and Basant Regmi were wicketless. Karan KC and Sandeep Lamichhane shared a wicket each.

Earlier, Nepal won the toss and elected to bat. Nepal made two changes in the playing XI with Anil Sah coming in for Dilip Nath who was dropped for poor form. The bigger blow for Nepal was losing Sharad Vesawkar due to hamstring injury, as stated by Team Manager Raman Shiwakoti on twitter. The dependable middle order batsman was replaced by bowling all-rounder Karan KC.

Nepal started in similar fashions losing the early wicket of Anil Sah for 7 runs. He fell to consistent Mujeeb Ur Rahman. The score was 13 for 1 at the end of 4th over when skipper and in-form batsman Paras Khadka arrived at crease. Khadka dominated a partnership of 92 runs with Gyanendra Malla, who has been struggling for form in recent matches. Nepal reached 105 for the loss of a wicket at the end of 27th over when Malla’s rear-guard came to an end. He made 23 runs in 69 deliveries before failing to read a googly from star bowler Rashid Khan.

Khadka was soon to follow but only after smashing 10 boundaries and a six in his innings of 75 runs. Mohammad Nabi scalped the price wicket and the most important one for Afghanistan. He was extracting extra bounce from the pitch as Khadka top-edged and skied a high catch for Samiullah Shenwari to complete.

A batting collapse followed as Nepal was bundled out for 194 runs in the penultimate delivery of the innings. Nepal lost last nine wickets for 89 runs which included small but valuable contributions from Dipendra Singh Airee and Aarif Sheikh. Airee scored 32 runs including three fours and a six before getting dismissed by Rashid Khan. Similarly, Aarif made 23 before getting out to Nabi. Both catches were taken by Najibullah Zadran.

Mohammad Nabi registered a four-wicket-haul conceding 33 runs from his 10 overs followed by skipper Rashid Khan’s three wickets in the match. Shapoor Zadran picked up two wickets and the most economical bowler for Afghanistan, Mujeeb gave 24 runs in his 10 overs picking up a wicket. Afghaitan required 195 runs to register their first win of the tournament and keep the qualification hope alive.

Nepal will face Hong Kong on Monday in a must win match.

KATHMANDU, Mar 9: Scotland skipper Kyle Coetzer made an unbeaten 88 runs to lead his team to the third win of... Read More...

"Do not impose tax on my period" (Photo feature)
17 hours ago
'No changes made in the tax imposed on sanitary pads in new budget'
16 hours ago
Nepal recorded a BoP deficit of Rs 38.75 billion during mid-July and mid-August
9 hours ago

Is the delta variant of the coronavirus worse for kids?
8 hours ago