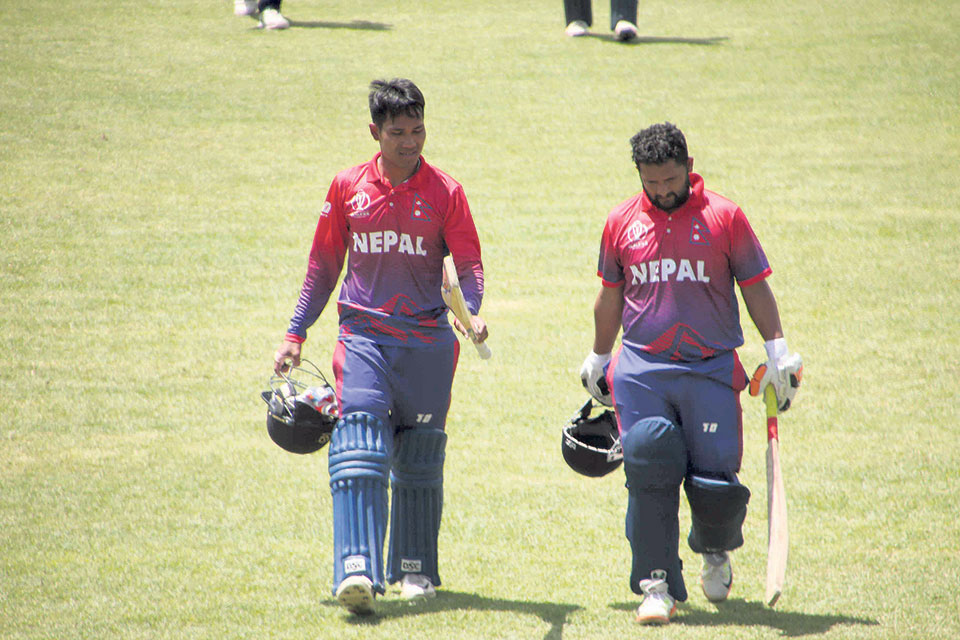 KATHMANDU, Mar 9: Scotland skipper Kyle Coetzer made an unbeaten 88 runs to lead his team to the third win of ICC Cricket World Cup Qualifiers against Nepal by four wickets in Queens Sports Club, Bulawayo on Thursday. Scotland has become the first nation to reach the second round of the qualifiers known as Super Sixes. The 33-year-old right-handed batsman held the Scotland innings together and carried his bat throughout the chase smashing seven boundaries and three sixes. He was adjudged the player-of-the-match.

Nepali spin bowlers led by Basant Regmi and Sandeep Lamichhane picked up two wickets each but could not defend 150 runs against Scotland who cautiously completed the chase in 41.3 overs.  Dipendra Singh Airee and Lalit Rajbanshi also picked up a wicket each.

Nepal is languishing fourth in the table with zero points and negative run rate of -1.695. Nepal’s chances for reaching Super Six stage are slim, which depends on results of their matches in the remaining fixtures against Afghanistan on Saturday and Hong Kong on Monday. Nepal will have to improve its net run rate even if they win both the matches.

During the chase, Scotland made a carefully played opening partnership of 33 runs before Matthew Cross was caught at slips off Sandeep Lamcihhane. The barrage of spinners led by Basant Regmi delivered tight spells and kept picking up wickets in regular intervals to defend the paltry target of 150 runs. Regmi clean bowled Calum MacLeod, hero of the chase against Afghanistan, for 15 runs to give Nepal some hopes. Scots lost another wicket, Richie Berrington in the next over crumbling to the pressure created by Nepal spinners. He was Lamichhane’s second wicket of the day. Scotland was 72 runs for the loss of three wickets at the 20th over.

The young left-arm spinner Lalit Rajbanshi then gave another dent to the Scots, castling George Munsey’s stumps. The left-handed batsman scored 10 runs. Scotland lost two more wickets of Craig Wallace and Mark Watt before sealing the chase in the 42nd over. Coetzer kept stitching small but crucial partnerships with all the batsmen falling around him before sealing the match with unbeaten 31-run partnership with Safyaan Sharif who made five not-out runs.

Skipper Paras Khadka was left stranded at another end. He, however, completed his 1000 runs in List-A cricket, becoming the first Nepali batsman to do so. He also completed his seventh half-century in limited overs cricket which is also most by a Nepali batsman in List-A, overtaking Vesawkar who has six. Khadka made 63 runs from 75 deliveries including 10 boundaries.

Nepal kept losing wickets at regular intervals as Sompal Kami was run out by a direct-hit from Richie Berrington in the field. Sompal shared a partnership of 40 runs in the slow re-build, scoring 18 runs that included two boundaries. The biggest blow to Nepal’s innings came in 28.1 overs when Khadka fell for a soft dismissal caught at short mid-off by George Munsey. Off-spinner Tom Sole claimed the wicket. Nepal was seven wickets down for exactly 100 runs at that stage.

Rohit Kumar Paudel and Basant Regmi then added valuable 15 and 24 runs respectively to the total. Regmi remained unbeaten facing 51 deliveries and scoring a boundary in his cameo. Sandeep Lamichhane (5 runs) and Lalit Rajbanshi (4 runs) were dismissed by pace bowler Alasdair Evans to bundle out Nepal for 149 runs in 47.4 overs. Wittingham was the pick of the bowlers with three-wicket-haul conceding 35 runs in his 10 overs.

KATHMANDU, Mar 11: Nepal’s hope of advancing into next round of ICC Cricket World Cup Qualifiers has taken significant dent after... Read More...

KATHMANDU, Oct 13: Nepal started another round of ICC World Cricket League Championship matches with a loss of 83 runs against... Read More...