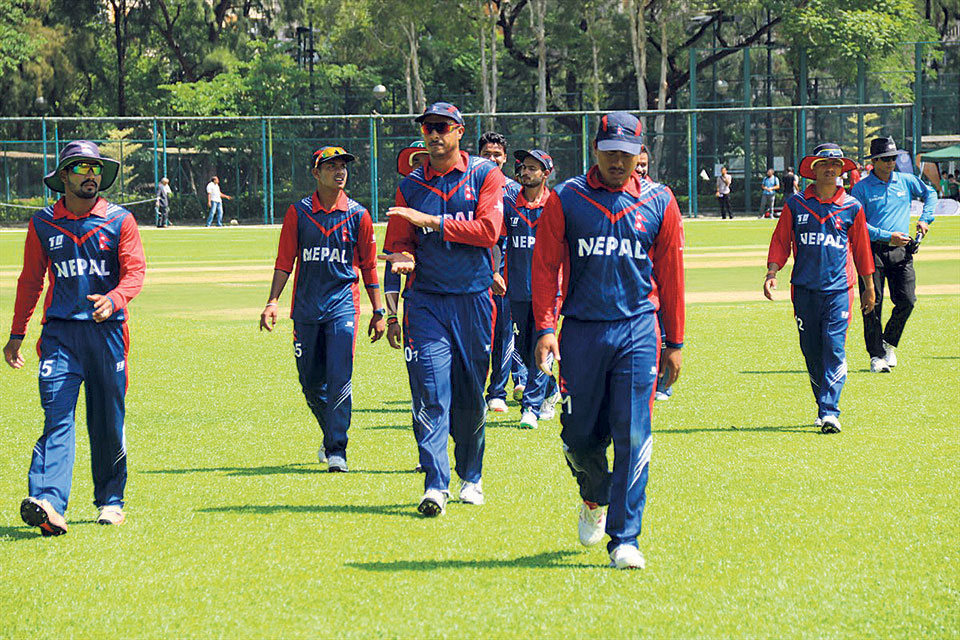 KATHMANDU, Oct 13: Nepal started another round of ICC World Cricket League Championship matches with a loss of 83 runs against home team Hong Kong at the Mission Road Ground, Mong Kok.

Aizaz Khan was the enforcer-in-chief claiming important wickets inducing poor shot selections. Skipper Paras Khadka made the top-score for Nepal with 26 runs to his name including three fours, before falling prey to an inswinging delivery. Nepal’s vice-captain Gyanendra Malla had a decent start but failed to capitalize as he was dismissed mistiming an uppish drive on an Aizaz delivery on 21. Dipendra, who was given caught behind for an unconvincing decision by umpire Ian Thompson, shortly returned to pavilion for three runs.

Aarif Sheikh and Sompal Kami, however, tried to calm the storm but fell to spinner Ehsan Khan, who was bowling in all the right areas. Sheikh was adjudged LBW to a regular off-spinner while Sompal’s mistimed sweep was brilliantly caught at short mid-on by Aizaz.

Binod Bhandari restored some grace but was short-lived when he was caught at the longest part of the ground for 18 runs. He was the only batsman for Nepal to score a six in the match.
Nepal was all out for 111 runs in 34.5 overs conceding the first match to Hong Kong by a margin of 83 runs for a race to top four of the WCLC table.

Earlier, Nepal won the toss and elected to field. Sharad Vesawkar was ruled out ill and was replaced by debutant Susan Bhari. Opening bowlers Sompal Kami and Karan KC delivered a disciplined spell of bowling resulting in the crucial wicket of Anshuman Rath for a ten-ball-duck. Rath is the highest scorer of ongoing ICC WCLC. It was a well-worked wicket as Karan KC persisted with a slightly shorter length with a line angling away from the left-hander. It tested Rath’s patience as Malla completed the catch at the second slip. HK lost their first wicket in the fourth over without adding any runs on the board.

Skipper Babar Hayat joined Jamie Atkinson at the crease and both carried a short partnership, especially Hayat counter attacking 35 runs from next six overs. He fell to a sharp fielding effort by Airee from mid-off region.

It was all spinners’ show after the Hayat wicket. The next two batsmen Nizakat Khan and Waqas Khan were stumped out by Sandeep Lamichhane and Basant Regmi respectively. They went to pick three and two wickets in their respective miserly spells that kept HK batsmen in check throughout the innings.

Jamie Atkinson made a well constructed 76 runs holding an end of the HK batting innings smashing nine fours and a six as wickets fell from the other end.

It was the late cameo by pinch-hitter Tanwir Afzal scoring 38 runs including three fours and three sixes that rescued HK from a slump of eight wickets for 144 runs after Jamie Atkinson fell.
HK was all out for 194 runs in the last delivery of the innings.

Karan KC bowled well with the new ball and was also equally effective in the slog overs picking up a wicket each in either part of the innings. Debutant Susan Bhari chipped in with a maiden and an important wicket of Jamie Atkinson.

Nepal, with eight points from 11 matches, is sitting at the sixth position while Hong Kong has moved on to the ICC World Cup qualifiers spot at the fourth position with 13 points from same number of matches.

Nepal plays their next and final match of the sixth round on Sunday.

KATHMANDU, Mar 9: Scotland skipper Kyle Coetzer made an unbeaten 88 runs to lead his team to the third win of... Read More...

KATHMANDU, March 30: Nepal won the toss and elected to field against Hong Kong in their last match of the... Read More...

Australia lifts ban on Boeing 737 MAX, a first in Asia-Pacific region
45 minutes ago