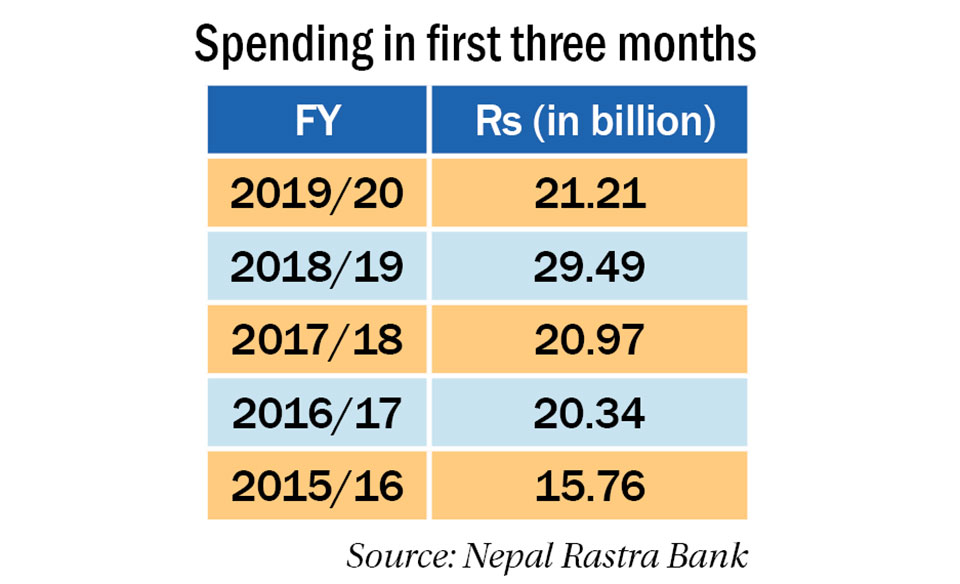 KATHMANDU, Nov 24: The recent controls imposed by the Nepal Rastra Bank (NRB) on the foreign exchange limit for outbound Nepali citizens has caused a sharp decline in the spending they make in overseas travel and tour. According to the recent data released by the NRB, the spending that outbound Nepalis make in international travel fell by 28.1% in the first three months of the current Fiscal Year 2019/20.

Nepalis spent Rs 21.21 billion in the first quarter of the current fiscal year, down by Rs 8.3 billion in the corresponding period of the last fiscal year when Nepalis vacationing abroad spent Rs 29.49 billion. The amount is based on the foreign currency exchanges that they get from bank and financial institutions (BFIs).

Travel agency operators say that the result is not surprising because of the NRB’s decision to reduce the maximum amount of foreign currency that a Nepali national can buy while going abroad.

The central bank has slashed the maximum limit per person going abroad for holiday or vacation to US$ 1,500.

“The amount of foreign exchange that a person gets during his/her visit has gone down by US$ 1,000,” said Laxman Tiwari, chairman of Muskan Travels, a Kathmandu-based travel agency that sells out-bound tour packages for various destinations. “The spending of outbound Nepalis declined simply because banks imposed new maximum limit in line with the NRB’s directive,” he said.

But, the foreign currency exchange control has not discouraged Nepalis from vacationing abroad, say travel and tour operators. Rather, the number of outbound tourists has been on an increasing trend, they say.

“People who can afford foreign tours do not stay in Nepal during festivals like Dashain and Tihar nowadays,” shared Bhola Bikram Thapa, managing director at President Travel and Tours, a travel agency company that provides ticketing and tour services. The decline in outbound travel expenses has helped in improving the external sector position of the country, according to NRB officials.

“The spending by outbound Nepali for holiday or recreational purpose has gone down in the review period due to tightening of the foreign exchange service by the NRB. This partly contributed to end our balance of payment position toward surplus,” Gunakar Bhatta, the chief of the Research Department at the NRB, told Republica.

According to the NRB data, the BoP remained at a surplus of Rs 14.43 billion in the first quarter of the current fiscal year 2019/20 compared to a deficit of Rs 35.42 billion in the same period of the previous year.

KATHMANDU, Oct 17: At least 61% of Nepali citizens have bank accounts, according to a financial report recently released by... Read More...

KATHMANDU, Jan 19: The rising import bill of the country has had its impact on the foreign exchange (forex) reserves,... Read More...

Two arrested on charge of rape
48 minutes ago