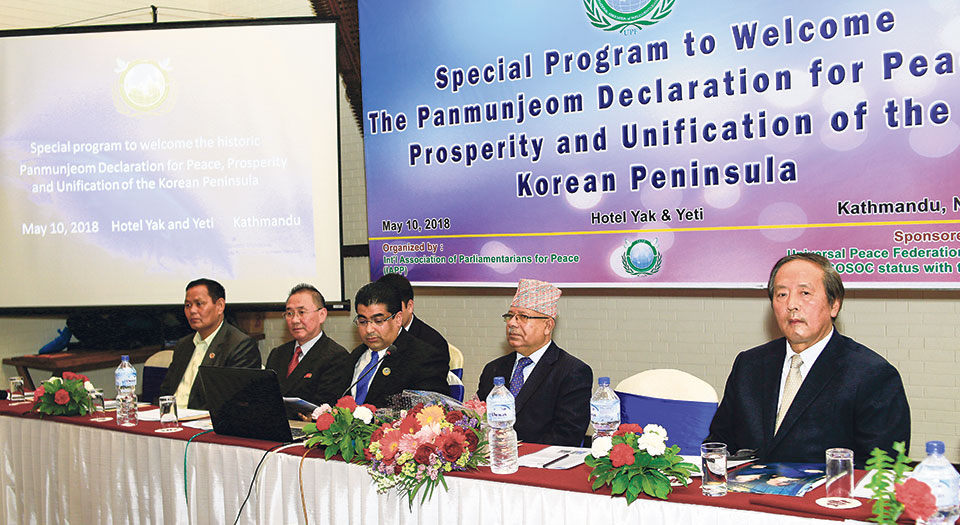 The two countries, which were at war for 65 years, last month struck a deal to bring end to hostilities as an effort to denuclearize the Korean peninsula. However, the final denuclearization would only take place following a deal between North Korea and the US.

Addressing a program organized by the Universal Peace Federation (UPF), an organization working for the world peace, Nepali leaders and civil society members congratulated the two countries for the historic deal.

They expressed hopes that the landmark agreement, which was signed by South Korean President Moon Jae-in and North Korean Supreme Leader Kim Jong-un, would be a much-needed step for world peace.

“We have seen that missiles can be silenced. It shows us what kind of future we can expect for the world,” said Nepal, who had visited North Korea weeks before the deal.

Speaking at the event, Shova Gyawali, director of Nepal Republic Media, said that the involvement of Nepal’s former prime minister in helping the Korean Peninsula achieve peace is a welcome step.

She further said that Nepalis would always cheer for peaceful and prosperous Korean peninsula.
Dr Seuk II Jing, Special representative of UPF, urged the two countries to build consensus based on the progress made so far for lasting peace.

Kim Yong Hak, DPRK ambassador to Nepal, described the deal as a milestone.
“The declaration is a milestone in the world peace. It is the result of hard work and sincere patriotism of the Korean people,” he said.

KAPILVASTU,Jan 21: As many as 430 Buddhists, who came here from South Korea, paid visit to the Buddha's land at... Read More...

The Grant Trap: An Unfathomed Economic Curse
20 hours ago

Kathmandu Metropolitan City: Balen maintains his lead, Sthapit behind by 20,000 votes
18 hours ago

After wheat, India bans export of sugar
12 hours ago

After wheat, India bans export of sugar
12 hours ago