KATHMANDU, Nov 27: The volleyball competitions under the South Asian Games (SAG) will kick off from Wednesday.

Nepal’s women’s volleyball team will take on Bangladesh at the National Sports Council’s covered hall to mark the beginning of the Games although the official inauguration of the South Asian mega sporting event is scheduled for December 1.

Men’s volleyball team will face Bangladesh later in the afternoon. Likewise, Maldives women will play against Pakistan women on the first day.

Participated by six countries, Nepal is pitted in Group A alongside India and Bangladesh while Sri Lanka, Pakistan and the Maldives are lined up in Group B.

Nepali women will meet India in the second group match on Thursday while men’s team will vie against India on Friday.

Fresh from the creating history after winning the Asian Volleyball Confederation (AVC) Central Zone Senior Women’s Volleyball Championship in Bangladesh, Nepali women’s team are full of confidence and determination to win the SAG title as well.

Captain Aruna Shahi said their only aim is to win the gold medal.

The women’s volleyball team was honored by the government on Tuesday for their outstanding performance in Bangladesh. 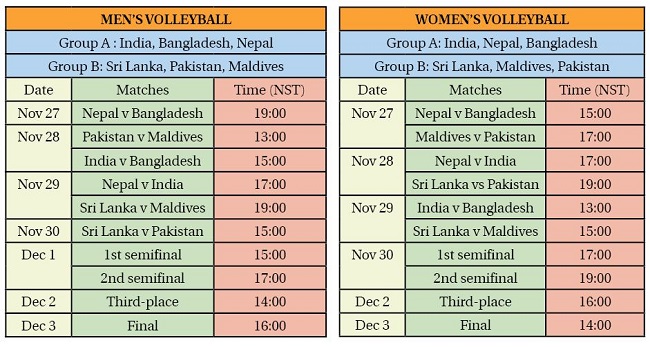