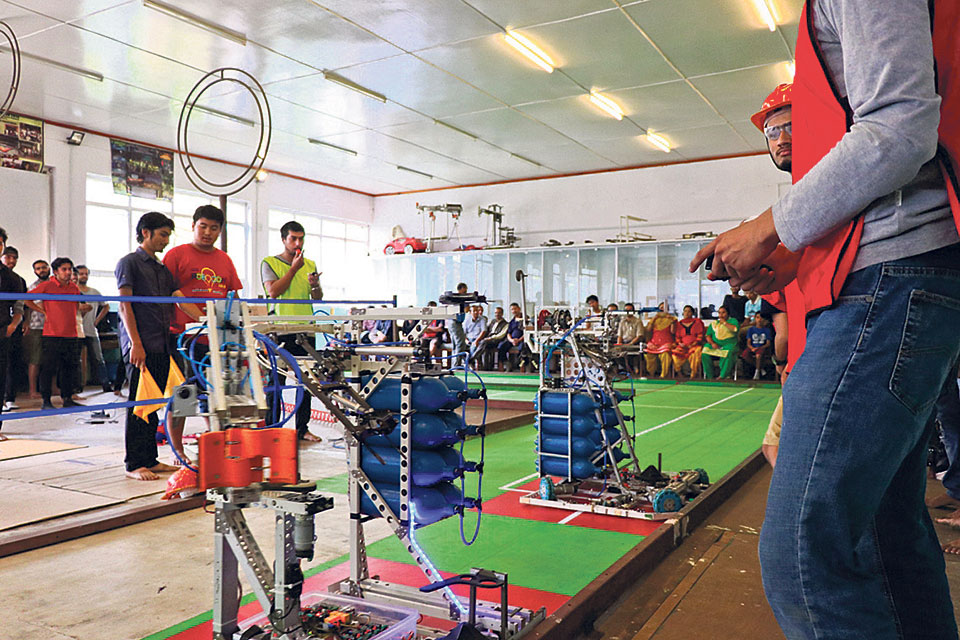 Students of Pulchowk Engineering Campus displaying their robots amid a function at the campus on Friday. They will participate in this year’s robotics competition in Vietnam soon. | Photo: Republica

KATHMANDU, Aug 4: A team of three students of the Pulchowk Engineering Campus; Abhish Khanal, Subhash Timalsina, and Sushan Paudel will be heading for Vietnam to participate in a robotics competition, which will see participation of students from over 22 countries. As part of a pre-event, they demonstrated their robots on the campus on Friday.

According to Timalsina, it took them over a year to build the robot. “We had to start from scratch,” he said adding,  “The robot was initially just a wheel-like structure. It took time and patience to create the final product.”

He added that the team visited junk dealers countless times to get the parts and components needed to build their robots.

The trio constructed a pair of robots, one of which is automatic and the other is remote-controlled. The competition is like a game, where the robots have to travel a designated runway and throw ball like items into rings from various distances.  They are given points accordingly, and whichever team completes the task in shortest time wins the competition.

“The robots are unique in that they can imitate human motion,” Paudel told Republica adding, “We spent sleepless nights building this robot and are extremely happy with the final product that we have created.”

He also thanked everyone who helped them build the robots. Without the help of our seniors, colleagues and teachers, it would have been impossible to create such a complex design, he said at the function.

The entire campus seems optimistic about Nepal’s performance in the final competition. As of now, the shortest time taken by the Nepali team is 50 seconds and they hope to complete the game in 30 seconds in Vietnam.

Dean Bajracharya stated in his speech, “I believe that the Nepali team will bring home the trophy this year.”

The Robotics Club Pulchowk Campus has been participating in international tournaments for the past sixteen years since its establishment in 2002 and has been performing outstandingly at both national and international levels.

Campus Chief Professor Motra says that the faculty hopes to make Pulchowk Campus “an ideal example of a research university”.

The campus also recently provided Rs 500,000 to the Robotics Club for its functioning.

POKHARA/SYANGJA, Nov 10: Nepali paragliders dominated an international paragliding competition held in Swarek of Syangja on Wednesday. According to the organizers,... Read More...