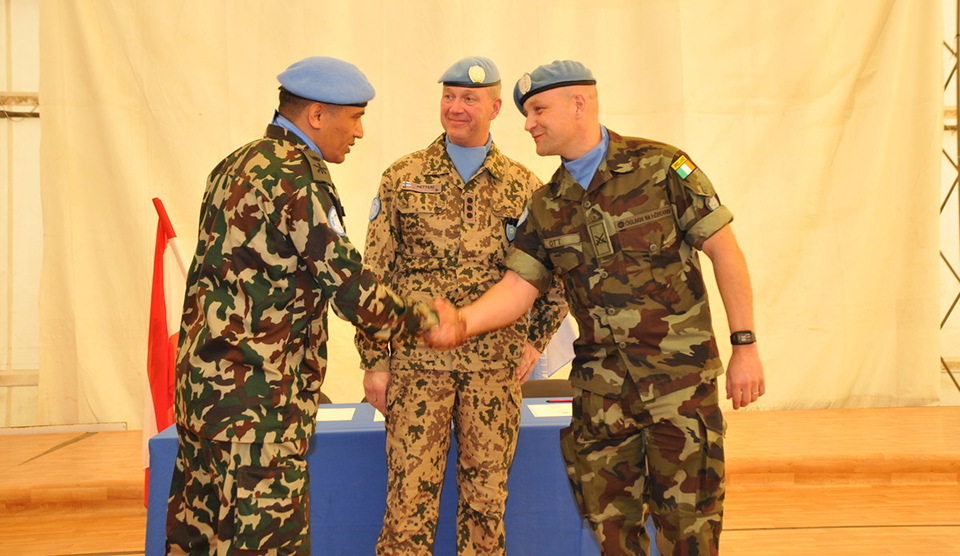 KATHMANDU, Feb 28: The Observer Group Lebanon (OGL), which is a part of the United Nations Truce Supervision Organization (UNTSO), has changed its command. Commandant Peter Ott from Ireland handed over the command to Lt. Colonel Ram Kaji Thapa from Nepal during a ceremony in the UNIFIL Headquarters.

With the change in command, the new OGL chief, Lt. Col. Thapa, has taken charge of 53 unarmed officers from 20 different countries.

OGL observers support UNIFIL in maintaining the stability and calm in the Mission’s 1,060 square kilometer area of operation in south Lebanon. Operating under the overall leadership of UNTSO, their counterparts are also present in Israel and the UN Disengagement Observer Force (UNDOF) in the Golan Heights. A group of observers remains in Sinai to maintain a UN presence in the peninsula.

Although OGL observers in Lebanon are under the UNTSO operational authority, they are under operational control of the UNIFIL Head of Mission and Force Commander.

KATHMANDU, July 6: Bollywood actress Sara Loren has taken to Nepali language as a means of communication in the Bollywood film... Read More...

Omicron coronavirus variant found in multiple US states
24 minutes ago

NC releases banner for its general convention
25 minutes ago

Both Thapa and Lingden announce their teams, 235 delegates nominated to the convention
33 minutes ago