This is the first-ever cross-border petroleum products pipeline launched in South Asia. While inaugurating the project via video conference, Prime Minister Oli said "We have similar visions of development, prosperity, and happiness of our peoples, backed up by solid political commitment and strong determination to realize them." 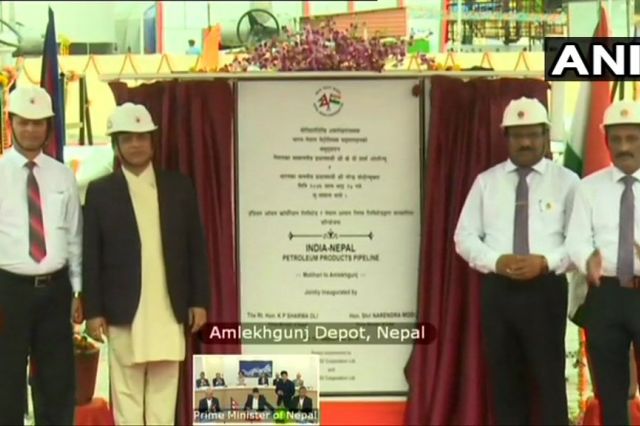 Oli said that Modiji’s campaign "Sabkaa Saath Sabkaa Bikas, Sabkaa Biswas" and his vision for Happy Nepal, Prosperous Nepali capture the essence of our commitment, determination, and efforts to transform the development landscape of our respective countries. 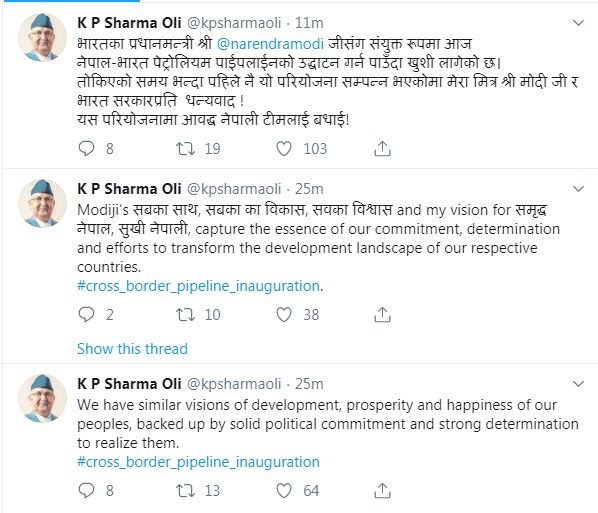 On the occasion, Indian PM Modi said "It is a matter of great satisfaction that the first cross-border petroleum pipeline of South Asia has been completed in record time. It was ready in half the time than expected."

Government officials said the 69-km long petroleum pipeline will now be used to supply diesel from Motihari, India, in the first phase. 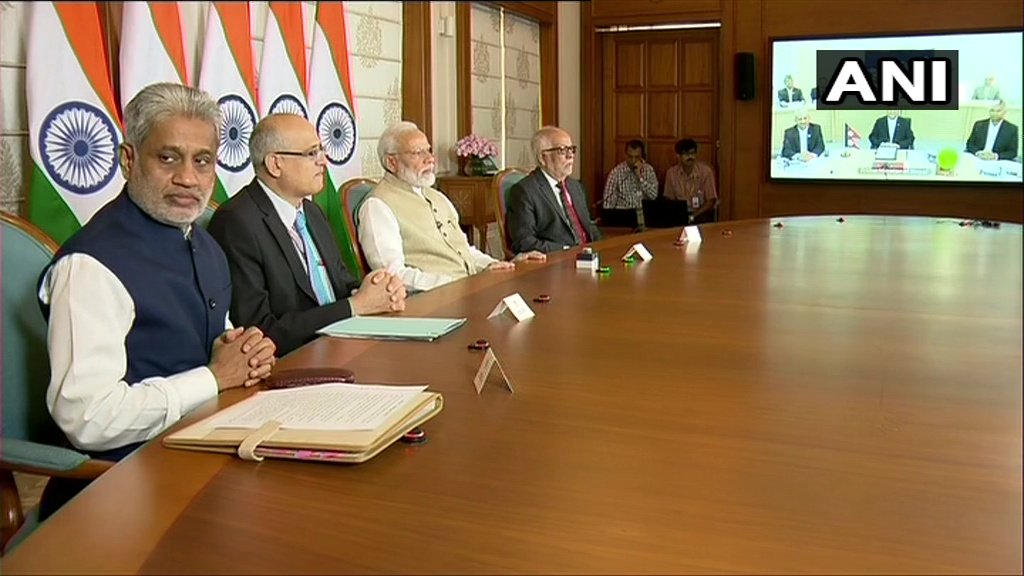 The pipeline, which starts from Motihari in India and ends at Amlekhgunj in Nepal. Indian Oil Corporation Ltd, India’s largest refiner, built the pipeline, with an investment of over INR 324 crore, in collaboration with Nepal Oil Corporation Ltd fulfilling the commitment made under an MoU signed in August 2014, according to a press release issued by Indian Embassy in Kathmandu.

Both these companies are also working to build additional storage facility at Amlekhgunj Depot which will augment the storage of petroleum products in Nepal towards which NOCL has committed the estimated cost of INR 75 crore IOCL and NOCL both worked in collaboration with various Government departments, including authorities of Birgunj Metropolitan city, Department of Roads and Department of Environment and Forest.

Presently, the products are being transported from India to Nepal by tankers/trucks at 13 pick-up points (7 products and 6 LPG). The Raxaul-Birgunj is the most important trade point between the two countries and is expected to reduce the movement of Tanker Trucks from these points to consumption centers in Nepal. The 10” diameter pipeline has a capacity of 2 Million Metric Ton Per Annum (MMTPA). The supplies from IOCL to NOCL started in 1974 and the relationship between the two countries in the petroleum sector has further strengthened with the operationalization of the pipeline.

The pipeline is equipped with the latest SCADA tele-supervisory system and the most advanced leak detection system. The signals of any tinkering or damage to the pipeline will be received through the optic fiber cable along the pipeline at the control centers, including at Amlekhgunj depot.

The Government of Nepal deployed its army to ensure security to the pipeline. IOCL also extended the training to over 25 NOCL official and technicians in operations and maintenance of pipeline in India and will continue to directly assist for at least a year.

Earlier, during the first official visit of Indian PM Modi to Nepal in August 2014, both India and Nepal had announced the building of a petroleum product pipeline. The ground-breaking of the project was carried jointly by the two Prime Ministers in April 2018 during the state visit of Prime Minister Oli to India. the pipeline was completed in just 15 months, half of the scheduled construction period and the bilateral flagship project reflects the new era of bilateral cooperation.

BARA, July  20: The petroleum pipeline constructed from Motihari of India to Amlekhgunj of Nepal was successfully tested on Friday. ... Read More...