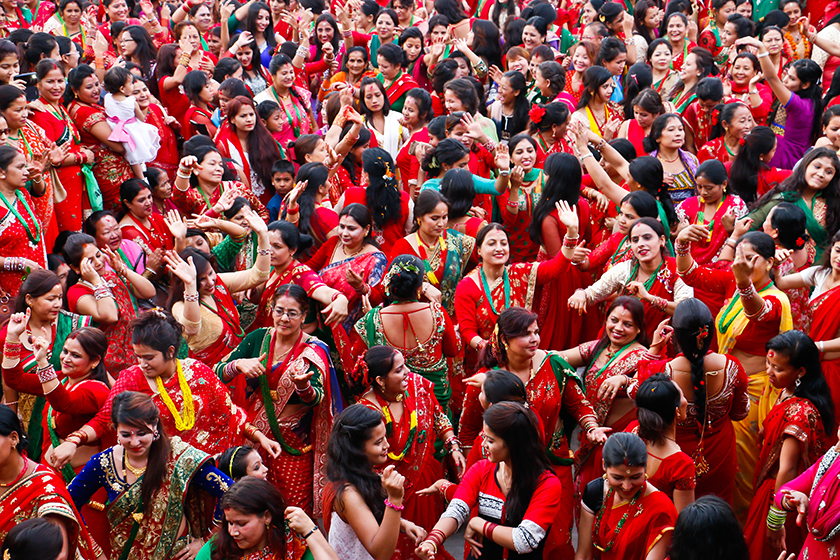 During Rishi Panchami celebration, the Hindu women are worshipping the Saptarshis– the seven saints– as stated in Hindu scriptures.

Clad in red, women set up the Saptarshis and worship them. Rishi Panchami is the last day of Teej festival.

Rishi Panchami is observed on the fifth day of bright half-moon of the month of Bhadra as per the Nepali calendar.

Hindu women reaching their menstruation period observe this festival with due respect and importance by fasting and paying homage to the Saptarshis (seven powerful saints as per the Hindu mythology) with a belief that they will be blessed and forgiven for all sins they believed to have committed during the menstrual cycle.

On the day, those observing the festival wake up early in the morning, go to the nearby river, stream, pond, and lake and take bath with established rituals. They clean their body with 365 stems of Apamarga, a medicinal plant; take bath with cow dung and soil collected from sacred places and ash.

The fasting ritual requires the devotee to take bath in the morning and carry out prayers after which the person is required to eat grains, vegetables, wild fruits, Kandamul, guava for a single meal and fast again.

On this day, woman devotees throng the Shrisheshwar Temple in Teku, Kathmandu, and other Rishi Temples across the nation for homage and worship.

Democracy Day to be marked in a grand manner

Kathmandu, Feb 17: The 69th Democracy Day is being marked across the country in a grand manner on Tuesday. ... Read More...