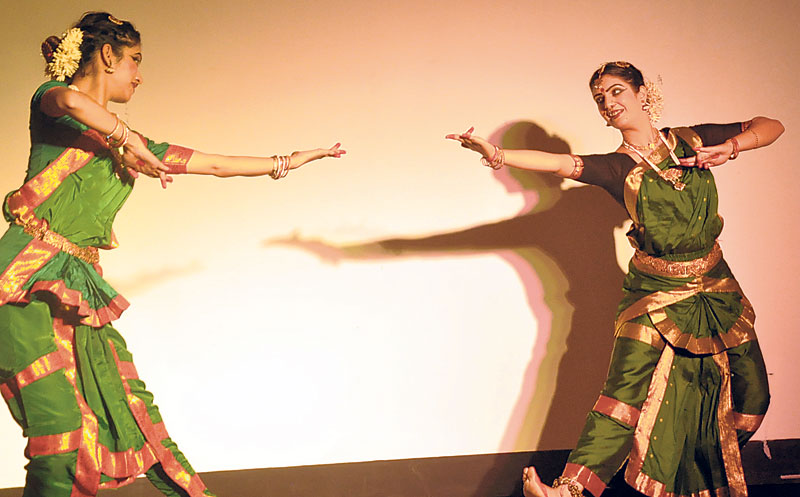 KATHMANDU, Sept 24: In their Bharatanatyam dance costumes the two girls appeared as if they came straight out of a Bollywood film. Their perfectly maneuvered dance steps captivated the audience present at the Yala Maya Kendra in Lalitpur. It was early September and the occasion was a Bharatanatyam dance show organized by Siddhartha Art Foundation.

After they finished their dance routine, they had stopped near the dressing room. I walked towards their direction. Equipped with a notebook and a camera that was slung to my neck, I was curious to know more about these dancers.

“May I have your introduction?” I asked in Hindi.

But the response I got was in perfect Nepali. “I’m Kriti Khanal and she’s Smriti Bista,” said one of the girls, moving her eyebrows like she did in her Bharatanatyam piece moments ago.

I was spared for my false start and we continued talking a bit. They told me that most people mistake them for Indian dancers. “Especially when we are dressed in these outfits,” Smriti said. “Once we start to talk, only then they realize we’re Nepali.”

Kriti, a management graduate, has been learning her Bharatanatyam craft at the Indian Culture Centre in Kathmandu since 2012. “I was interested in learning classical dance forms,” she said. “When I was exposed to Bharatanatyam at the centre, I instantly wanted to learn it.” She was taking Kathak lessons during that time but she soon switched to Bharatanatyam.

Smriti also has a similar story. Like her dance partner, she had a passion for dancing from a small age. A graduate of mass communication, Smriti is also trained from the Indian Culture Centre.

Bharatanatyam is a demanding dance form. They said that it takes a lot of practice to properly master your body movements along with your eye movements. The practice sessions drain them but they still find the dance form rewarding. “Many of our friends have left the training in the middle. But I’m still dancing for the past four years,” Kriti said.

Though the dance form has its origins in India, they believe that dance cannot be confined to any national boundaries. “At the beginning it was just a simple hobby but now I feel that I have a bigger responsibility to share this art with more people,” Kriti said.

They revealed that the dancing part is painless. The real challenge is to get dressed up for the dance. “We spend nearly three hours doing the makeup and dress up before the performance,” said Smriti. “In our Bharatanatyam attire we get transformed into someone else, so it’s hard even for us to believe that we’re the ones who are dancing.”