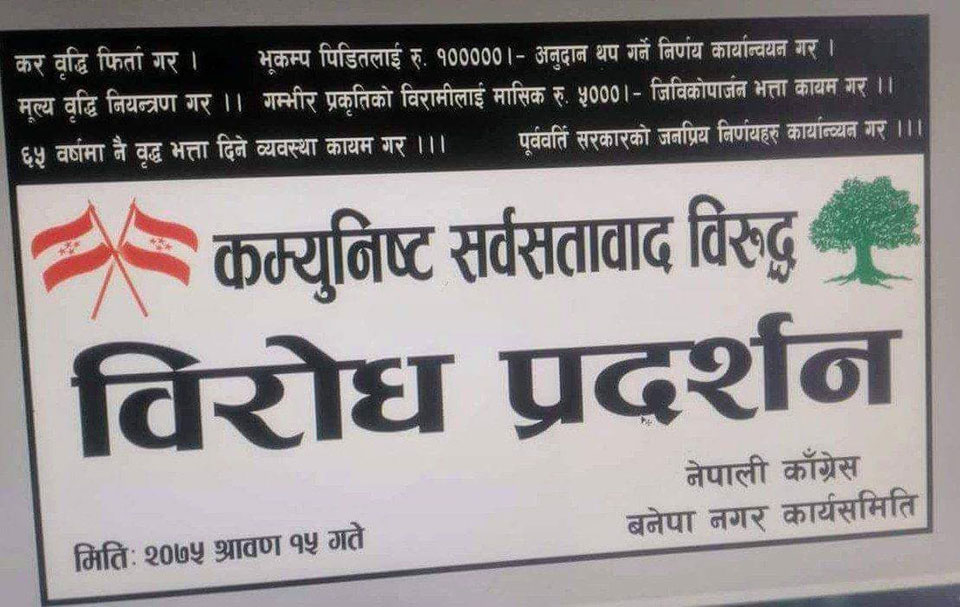 KATHMANDU, July 31: Nepali Congress, the main opposition party, is staging protests across the country against the government’s authoritarian and undemocratic decisions. In Kathmandu, senior leaders of the party will address a mass that will convene at 2:30 PM.

The party is staging protests in headquarters of all the 77 districts of the country. Dr. Sashank Koirala, the party’s general secretary had directed party cadres and supporters to rise against government’s authoritarian rule.

The party has accused the government of acting against democratic processes and dismissing the constitution, especially in the case of speaker and deputy speaker in the federal and provincial assemblies.

“The government is centralizing power and hindering free judiciary. It is showing blurred lines in the operation of the party and the government,” Koirala said in a press release.  Nepali Congress has also accused the government of acting irresponsibly and making no attempts to curb soaring inflations.

Pachthar: Nepal Tarun Dal, Nepal Student Union and Women’s Association are organizing a motorcycle rally at 1 PM. The protesters will convene at Fidim’s main chowk and convert into a protest rally, according to Narendra Kumar Kerung, chairman of the party in the district.

Khotang: A protest rally is scheduled at Diktel. The party will organize assemblies in different places of the district.

Sankhuwasabha: The party will start a rally at 11:30 AM and will assemble at the party’s office at 1 PM, according to Dipan Kumar Shrestha, chairperson of the district’s party office.

Kavre: The district’s chapter and Banepa City Committee are staging rally against the government at 11:30 AM in Dhulikhel.

KATHMANDU, July 24: Supporters of Dr. Govinda KC staged protest against the government’s delay to save his life and fulfill... Read More...

GULMI,  May 21: Nepali Congress, Gulmi has started a drive against social anomalies and aberrations in various places of the district... Read More...