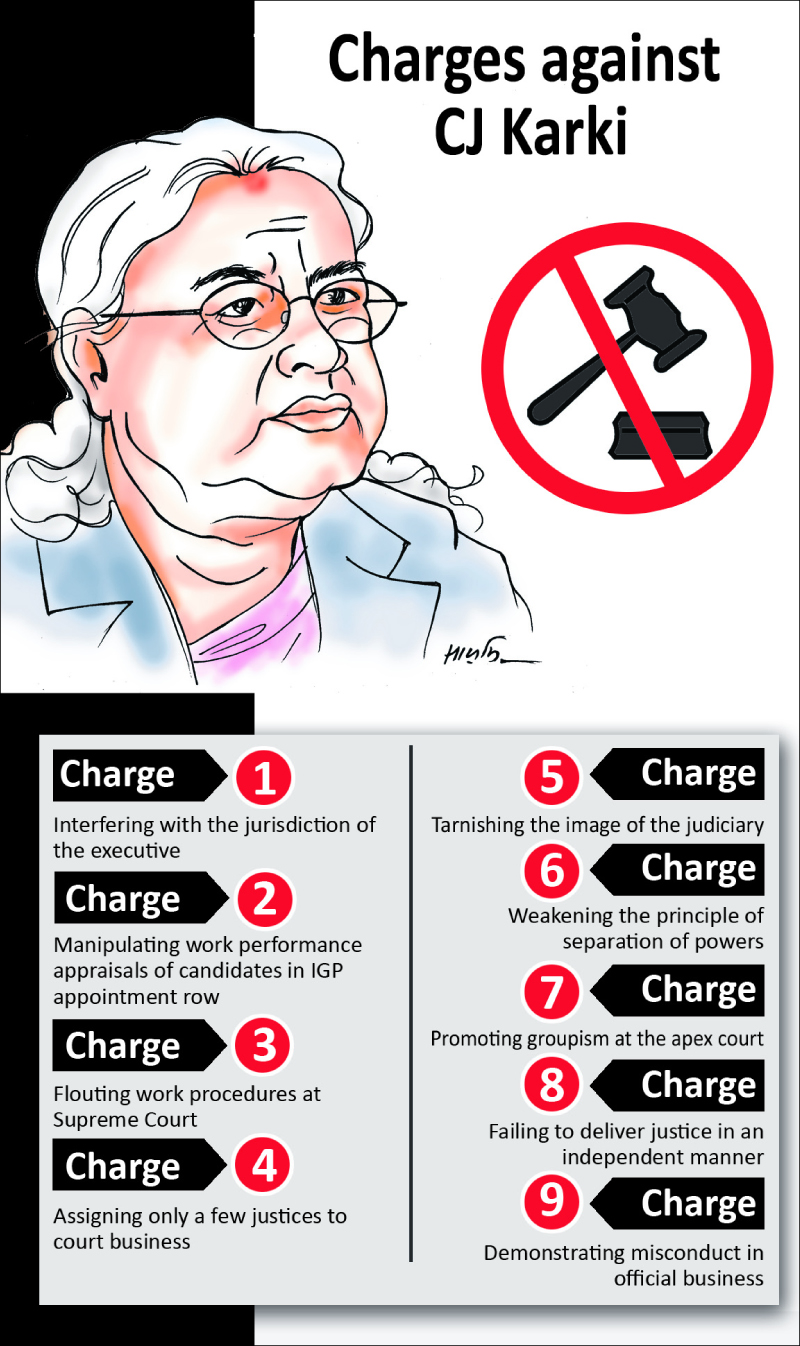 KATHMANDU, April 30: In a dramatic development, lawmakers from the ruling Nepali Congress (NC) and CPN (Maoist Center)  registered an impeachment motion against Chief Justice Sushila Karki at the parliament secretariat on Sunday.

The move has triggered a series of major political developments, including the resignation of Deputy Prime Minister and Home Minister Bimalendra Nidhi and the decision of ruling coalition partner Rastriya Prajatantra Party (RPP) to call an emergency meeting on Momday to officially decide ‘to quit’ the Pushpa Kamal Dahal-led government.

These  developments come a day after the ruling and  agitating Madhes-based parties agreed to register a supplementary constitution amendment bill in addition to the 11-point  amendment bill registered earlier in  parliament and to expedite its endorsement so as to bring the Madhesi parties on board the polls.

The impeachment motion has made nine various allegations against Karki, including failure to honor the independence of the judiciary, encroaching upon the jurisdiction of the executive branch and ignoring evidence while deciding verdicts on writ petitions related to the appointment of the police chief.

The ruling parties were miffed with CJ Karki, especially after the Supreme Court revoked the government’s decision to promote Jaya Bahadur Chand to inspector general of Nepal Police. The impeachment motion that leaves CJ Karki suspended effective from Sunday  comes two days before crucial hearings on a writ petition filed by DIG Nawaraj Silwal demanding his own appointment as police chief.

Officials at the Parliament Secretary had reached the President’s Office to inform the president about the impeachment motion shortly after it was registered in  parliament. The Constitution of Nepal 2015 states that the chief justice is automatically suspended if one-fourth of the total number of lawmakers in the House brings an impeachment motion.

If the motion is passed by at least a two-thirds majority of the members of  parliament, Karki shall be relieved of her office. However, the impeachment motion is unlikely to be passed by parliament as serious rifts have surfaced within the NC and coalition partner RPP has threatened to quit the government over the issue.

No strong ground for impeachment motion against CJ: Nepal

KATHMANDU, May 7: Senior leader of the main opposition CPN-UML, Madhav Kumar Nepal has said that there has been crossing... Read More...