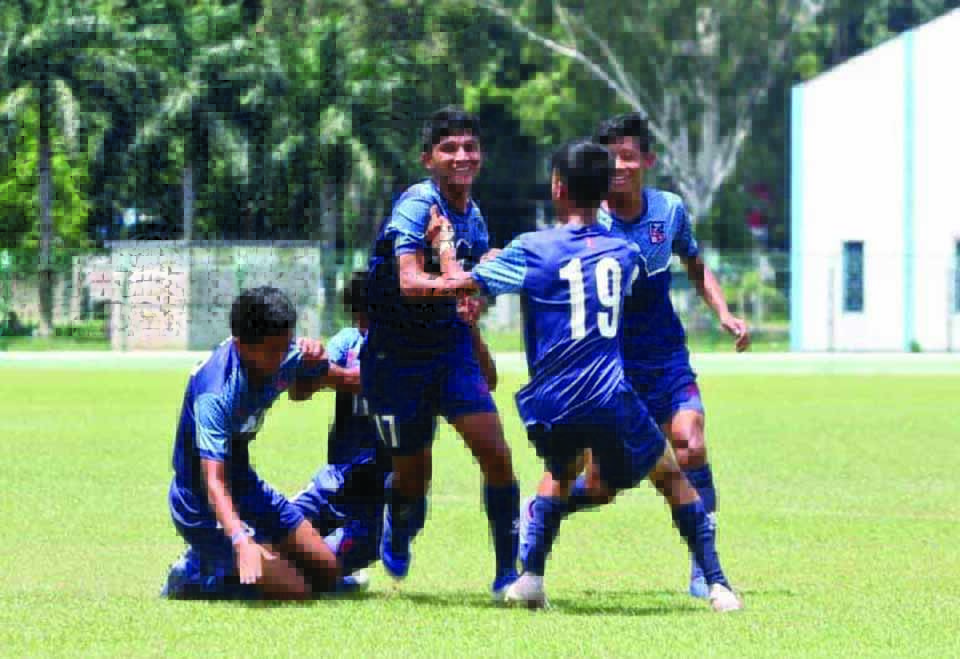 Nepal’s Niranjan Khatri (17) celebrates with his teammates after scoring a goal during the SAFF U-15 Championship football match against Bhutan at the Kalyani Stadium in Kolkata, India on Thursday. Photo Courtesy: Indian Football Team/Twitter

Nepal and the group winner India, secured wins against Bhutan and Bangladesh respectively
in last group matches held at Kalyani Stadium in Kolkata, India on Thursday.

An unbeaten India defeated defending champion Bangladesh 4-0 in the final match of the group stage to finish at table-toppers with four wins and 12 points.

Earlier, Nepal had registered a comfortable 6-0 win against Bhutan in its final group match to secure the final clash with India on Saturday.

Nepal is on second place on the group table collecting nine points from three wins in four matches.
Pradeep Lamsal opened the scoring spree in the 5th minute for Nepal before adding his second and team’s third goal of the match in the 48th minute. Meanwhile, Nirajan Khatri, Ashim Rai and Krish Sapkota netted the ball to Bhutan’s post in the 9th, 75th and 85th minutes respectively in a one-sided affair against Bhutan.

Earlier, Nepal had defeated defending champion Bangladesh and Sri Lanka to make a comeback in the tournament after suffering an opening loss of 5-0 against India during the first group match held at the same venue.

Krishna Adhikari Yadav scored twice whereas Sugan Jimee and Lamsal chipped with a goal each to complete a 4-1 win against the Bangladesh on Tuesday.

Nepal will lock horns with India on Saturday for the U-15 trophy by virtue of finishing top-two during the group stage.