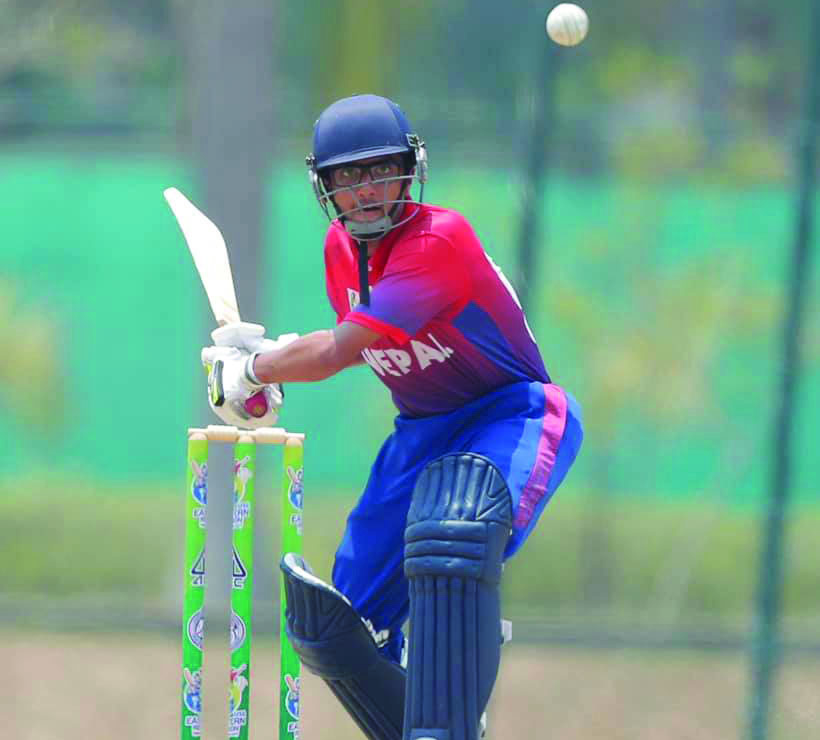 Asish Bhattarai of Nepal U-16 cricket team bats during an ACC U-16 Eastern Region cricket match against Thailand U-16 at the Prem Tinsulanonda International School Cricket Ground in Chiang Mai, Thailand on Thursday. Photo Courtesy: ACC

KATHMANDU, April 26: Rain played a spoilsport as the third group match between Nepal U-16 and host team Thailand U-16 cricket team was abandoned 11 deliveries into the second innings during the ACC U-16 Eastern Region Cricket Tournament held in Prem Tinsulanonda International School Cricket Ground in Chiang Mai, Thailand on Thursday.

Thailand had lost a wicket for no runs on the board in 1.5 overs chasing the target of 235 runs posted by Nepal when rain delayed the match. The teams shared a point as the match couldn’t resume. Nepal finished on top of the Group A table after both the teams shared a point each. Defending champion Nepal remained unbeaten during the group stage defeating Myanmar and Malaysia.

Nepal will face Hong Kong U-16 in semifinal on Saturday. Similarly, home team Thailand has been eliminated finishing third on the points table with three points. Malaysia U-16 team that finished second will face Singapore U-16 team in the other semifinal match on the same day.

Nepal won the toss and elected to bat first in the final group match of the league stage. Opening batsman Dinesh Bohora made a quick start with 35 runs from 36 deliveries which included five boundaries and a six.

Similarly, skipper Bishal Bikram KC continued his good form with the bat scoring 38 runs from 31 deliveries. KC smashed four boundaries and two sixes during his dominating innings and shared a commanding partnership of 73 runs from 53 deliveries with Bhattarai.

The impetus was provided by a partnership of unbeaten 42 runs from 24 deliveries between Bishal Kumar Patel and Nikhil Kumar Singh for the eighth wicket to propel Nepal to a total of 234 runs for the loss of seven wickets in 35 overs.

Patel stayed unbeaten on 28 runs off 23 deliveries and Singh remained not out on 22 runs from 12 deliveries.

Nepal takes on Thailand in ACC U-19 cricket tournament

PM Oli's remarks on Ayodhya not linked to any political subject and have no intention at all to hurt anyone’s sentiments: Foreign Ministry
20 hours ago

116 new cases of coronavirus recorded in past 24 hours : MoHP
11 hours ago