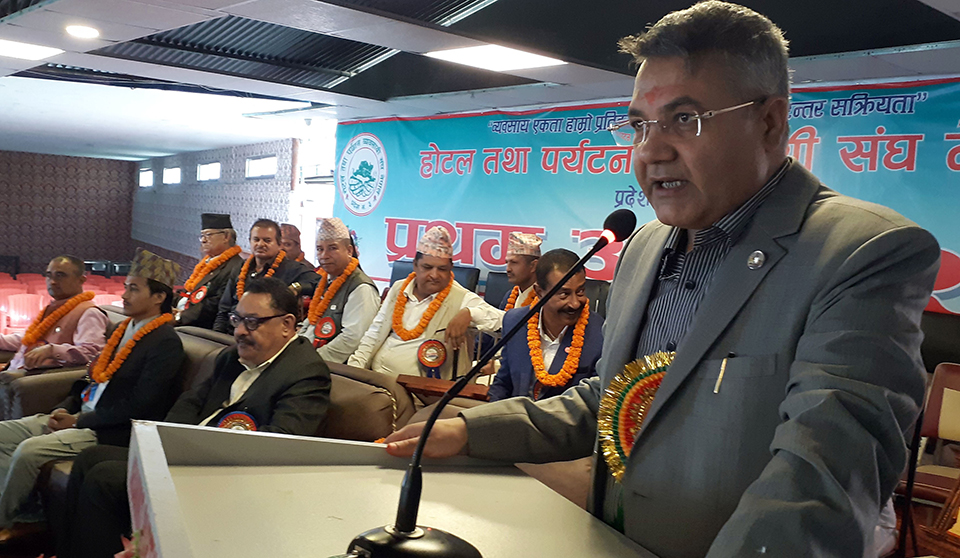 KAVRE, July 27: Minister for Communications and Information Technology Gokul Prasad Baskota on Saturday said Nepal would host the Global Media Summit-2020 coinciding with the Visit Nepal Year, 2020. "The Ministry will organize the Summit. Nepali media will become its partner," he said urging hotel and tourism entrepreneurs to cooperate with the government in this regard.

Minister Baskota was inaugurating the first convention of the Nepal Hotel and Tourism Entrepreneurs Association of State 3 here. He cited the example of Thailand, which saw unprecedented growth in tourism by organizing the Summit after being hit hard by the flooding in 2008. "Natural disasters can occur anywhere.

We all should unite in times of difficulty," he said. The government was ready to assist hotel and tourism entrepreneurs once they bring plans outlining development activities in a way to strengthen the country. "You (hotel and tourism entrepreneurs) should also focus on domestic tourism. Organizations should not be made a subject to bargaining as it ultimately harms the country," he said. The government has set aside a budget of Rs 100 million for the Visit Nepal Year, he said.

"The Tourism Ministry and Nepal Tourism Board will assist in this regard. We all should come together to make the year a success," he said. Minister Baskota said the government would work to develop infrastructures related to road, electricity and the internet to float the concept of big hotels. "Please come up with a plan, the government can lease out lands to those interested in developing big hotels and tourism structures in an appropriate area excluding the reserve land", he added. Also today, Minister Baskota laid the foundation stone of a meeting hall to be constructed by Dhulikhel municipality.

Dhulikhel Mayor Ashok Kumar Byanju informed that the meeting hall with an accommodation capacity of 600 is to be built at the cost of Rs 40 million.

Explainer: How worried should we be about the Omicron variant?
2 hours ago