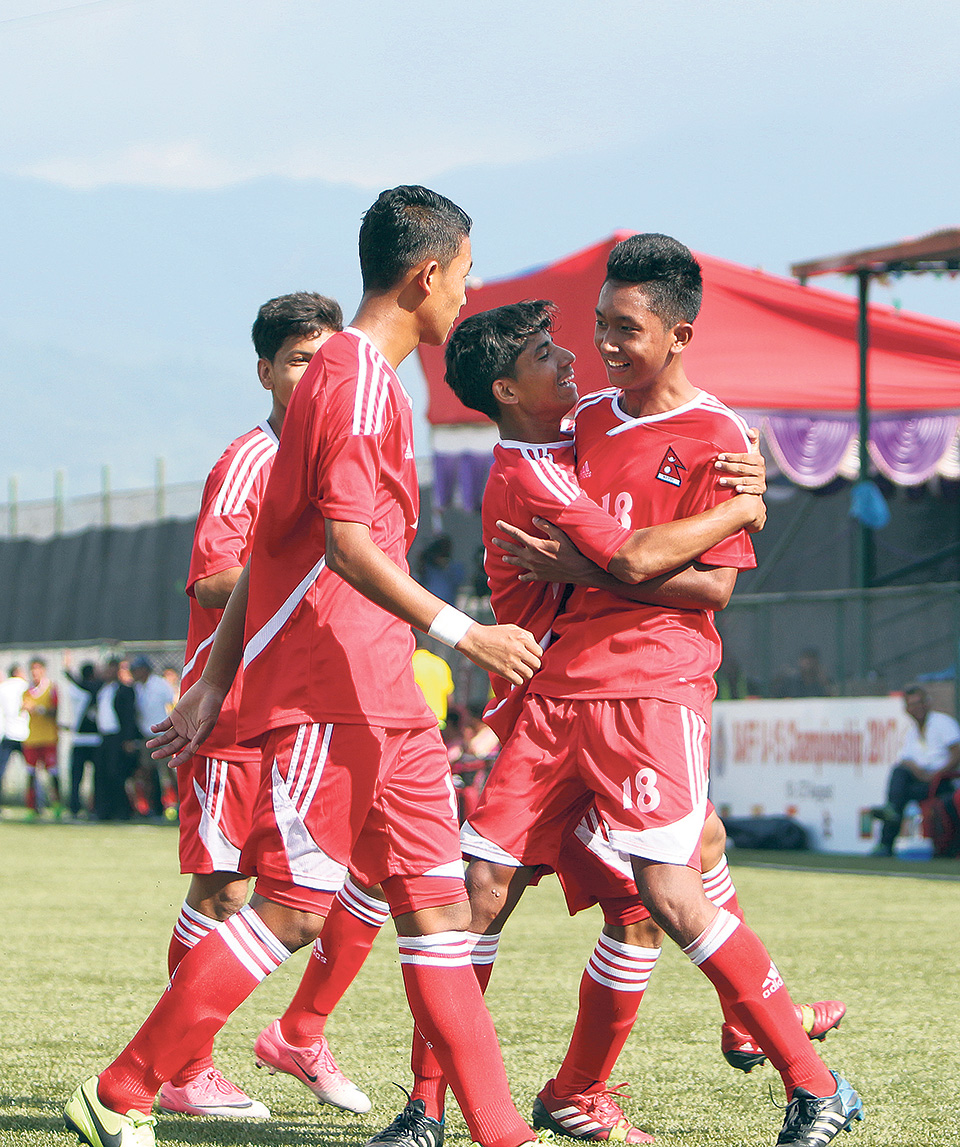 KATHMANDU, August 26: Nepal U-15 side will face India in the final as it swept aside Bangladesh in the semifinal of the ongoing SAFF U-15 Championship on Friday.

In the match played at the ANFA Complex, Satdobato, Aakash Budhamagar scored twice in the first half and Birjesh Chaudhary found the net in the stoppage time and an own goal from Bangladesh’s Nazmul Bishwas contributed to the four-goal haul for Nepal. Bangladesh came back in the match with two back to back strikes in the 73rd minute.

Nepali coach Sunil Kumar Shrestha said that his side successfully took advantage of the home ground as Bangladesh played under pressure throughout the 90 minutes.

‘‘Bangladesh was in pressure before Nepali supporters which helped us take advantage and take a lead in the first five minutes, Shrestha said, ‘‘They were in additional pressure after the first goal.’’
Shrestha said that he was happy to enter the final but an improved performance is required to clinch the trophy.

‘‘Although we took a 3-0 lead, we focused more on the attacking rather than defending. As a result, we conceded two goals in the interval of one minute which consequently put our team under more pressure,” Shrestha said adding, “Weakness in midfield was seen again in today’s match but we need to improve our game against India.’’

Nepal was beaten 2-1 against India when the two teams met in the group stage.

Shrestha added, ‘‘Although Nepal dominated possession throughout the match, we failed to convert the chances after forward Akash was subbed off due to injury and Darshan Gurung could not play as we had expected.’’

Nepal took the lead in the sixth minute when Akash converted the cross from defender Randip Paudel. Akash added to his tally in the 30th minute. He struck the ball to the net as Bangladeshi goalkeeper Emon Hawaldar could not collect the cross of defender Deepak Bhandari.

Nepal was leading 3-0 after Bangladeshi defender Bishwas scored an own goal in the 65th minute. He put the ball in his own net while trying to stop the shot from Randip.

Bangladesh showed a comeback spirit after Mohammed Foysal and Mohammed Habibur Rahman scored inside a minute. Foysal scored the first goal for the visiting side while Rahman took advantage of the lack of combination of Nepal. But Birjesh scored the winner in the stoppage time to guarantee a win for Nepal. He converted Randip’s pass to guide the ball into the net.

Bangladesh coach Mostofa Anowar said they had to face defeat despite playing well as luck was not in their favor.

Anowar said, ‘‘We were better than Nepal on the pitch despite what the result showed. We conceded the first goal because of the mistake from our defense and the second goal after our goalkeeper failed to catch the ball.’’

Anowar added, ‘‘It is always difficult to face the home team. We tried to make a comeback as we scored two goals after trailing 3-0 behind but failed to convert the chances. It was a bad day for us.’’

Nepal will take on India on Sunday.

India beat Bhutan 3-0 in the other semifinal played at the Halchowk Stadium. India skipper Bikram Pratap Singh, Harpreet and Ridge Melvin scored a goal each.

Bangladesh will face Bhutan in the third place playoff on Sunday before the final.

KATHMANDU, August 25: Aakash Budhamagar scored twice in the first half and Birjesh Chaudhary found the net in the stoppage... Read More...

KATHMANDU, April 24: Nepal suffered a defeat at the hands of India in the final match of women’s category in the... Read More...