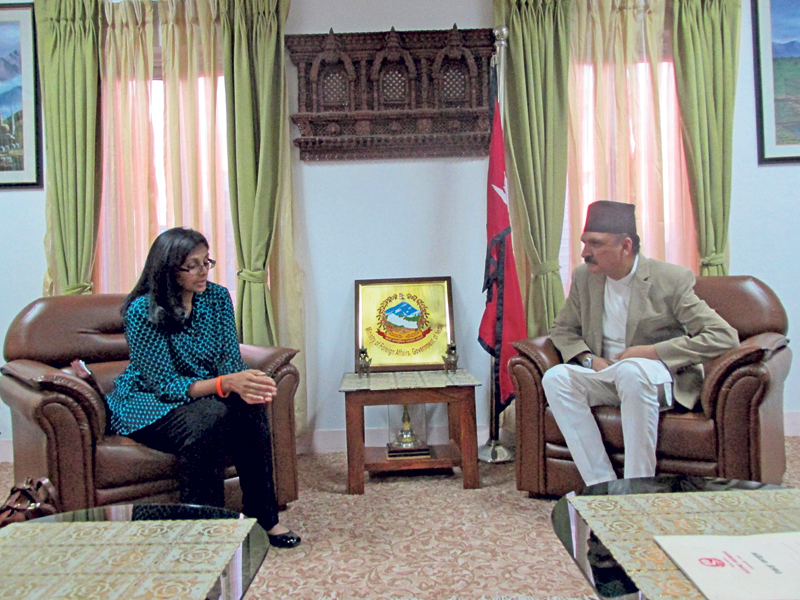 US Assistant Secretary of State Biswal asked Nepal if it could allow permanent stay for some 10,000 Bhutanese.

KATHMANDU, Sept 4: Minister for Foreign Affairs Prakash Sharan Mahat has reiterated Nepal’s stance that Bhutanese refugees languishing in the eastern part of Nepal since two decades must be allowed to return to their home country without any conditions.

Mahat said this during a meeting with US Assistant Secretary of State for South and Central Asian Affairs Nisha Desai Biswal at the Ministry of Foreign Affairs, Sunday.

Mahat made Nepal’s position clear as Biswal had asked if Nepal could allow the remaining Bhutanese refugees to live permanently in Nepal.

“During the meeting, American Assistant Secretary Biswal asked if Nepal can promise to allow permanent stay for around ten thousands of Bhutanese that remain after resettlement in various [third] countries including America,” reads a statement issued by the Ministry of Foreign Affairs after the meeting.

Mahat also made clear that Nepal has been giving refuge to the Bhutanese only on humanitarian grounds.

“Minister said that Nepal has been reiterating that their [refugees’] right to return to their country should be respected and they should be allowed to go back home without any condition and the international community should support  Nepal’s position,” reads the statement.

He said it was Nepal’s long-standing position that the Bhutanese refugees should be allowed to return home unconditionally.

During the meeting, Biswal also proposed to set up a bilateral joint mechanism to expand bilateral relations. They also discussed various other bilateral issues of mutual interest and relations.

Over 100,000 Bhutanese refugees have been settled in various countries, including Australia, Canada, Denmark, New Zealand, the Netherlands, Norway, the United Kingdom and the USA.

The forgotten tale of Bhutanese refugees

The elderly refugees wish to ‘die in Bhutan’ ... Read More...

Finding Beacon of Education Nestled at Maitighar Heights
14 hours ago

Tiwari is new DG of Department of Industry
20 hours ago