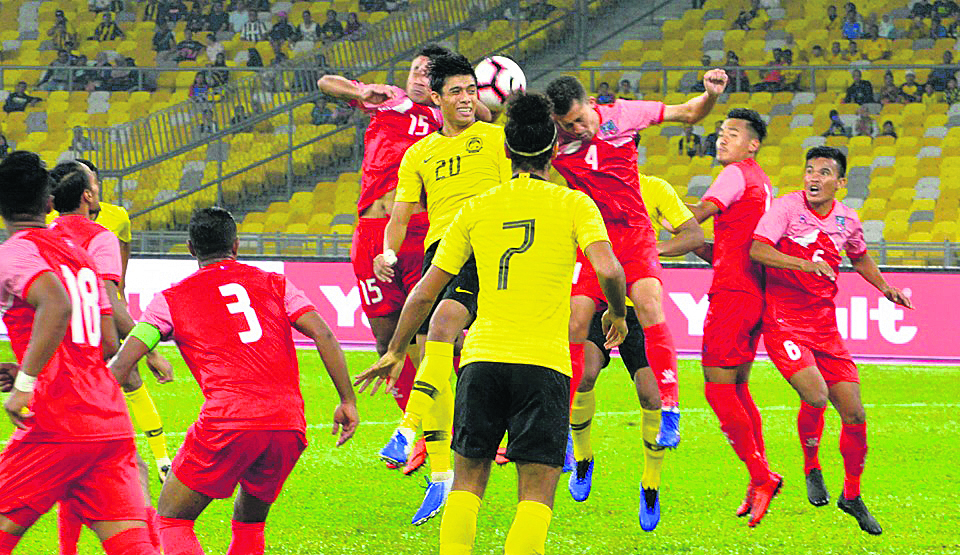 Players of Nepal (red) and Malaysia in action during their friendly football match at the Bukit Jalil National Stadium in Bukit Jalil, Malaysia on Sunday. Photo Courtesy: FA Malaysia/Facebook

KUALA LUMPUR, June 3: Nepal suffered its second defeat in three games under head coach Johan Kalin as the side lost to lower-ranked side Malaysia 2-0 in a friendly football match in Kuala Lumpur, Malaysia on Sunday.

At the Bukit Jalik National Stadium, goals from Shahrul Mohammad Saad and Muhammad Safawi Rasid sealed the win for Malaysia before its play-off World Cup Qualification matches against Timor Leste.

Nepal, a 161st ranked team, lost to the 175th ranked Malaysia with relative comfort in the game which saw Malaysia dominate throughout the game with better passes and finishing. Nepal was not able to create good chances in the game and was completely outclassed.

Nepal presented a poor first half failing to control the possession in the middle of the park and allowing too many balls through to the Malaysian wingers.

As the first 10 minutes went by, the shape was wide and gave the home players space to roam and put crosses inside the box.

The first chance for Malaysia came within a few seconds of the game as full-back Ranjit Dhimal fouled a Malaysian player just outside the danger box, but the free-kick from Muhammad Syafiq Ahmad hit the wall and the rebound shot from Muhammad Syazwan Zainon went over the bar in the first minute.

The second chance for the home side came in the second minute as Muhammad Safawi Rasid hit a corner, which was headed by Abdul Halim Saari. The ball was blocked by the overcrowded Nepali defense and a follow-up shot saved by keeper Kiran Kumar Limbu, who went to the ground and saved the shot with relative ease.

Nepal found it hard to keep hold of the ball and suspended its chances to go forward and attack from any areas of the pitch, which propelled Malaysia to take charge of the game and attack through the flanks.

Malaysia got another chance in the sixth minute as Corbin Ong La'vere Lawrence hit a shot from near the edge of the box and hit the post, while Rasid's shot a minute later from the right side was saved by Limbu again. Limbu punched the ball away to safety again after a shot from Rasid from outside the box in the eighth minute.

Nepal got a good chance to take the lead in the 29th minute as Dhimal hit a free-kick, and the ball was cleared. The follow-up from Bikram Lama, a shot from outside the box was deflected and hit the outside of the post and was later cleared away to safety.

Rasid was the catalyst in the Malaysian attack as he hit a shot from outside the box, but was saved by Limbu in the 32nd minute, while a shot from Muhammad Akram Mahinan went narrowly off the target a minute later.

The second half produced more of the same as the first with Malaysia controlling the possession and taking chances of its fluid attack from the flanks considering the pace of substitute Muhammad Akhyar Abdul Rahid and Rasid.

However, Malaysia was able to take the lead in the 50th minute as center back Ananta Tamang pulled Abdul Rashid inside the box just when he was about to cut the ball back. Safawi Rasid dispatched the ball comfortably hitting the top right net.

It was all Malaysia after that. Safawi Rasid still got the better of his opponent Dhimal as he got in front of him and his shot from inside the box wide in the 52nd minute, while a shot from Mohammad Syafiq Ahmad from outside the box went over the bar two minutes later.

Abdul Rashid dribbled the ball past the Nepali defense line, however, his shot from near the center part of the box was blocked by Devendra Tamang in the 79th minute. Saad sealed the win for Malaysia heading in a free-kick in the 82nd minute.

Nepal got a last chance to pull a goal back as Sunil Bal gave a cross to the far post, which was tipped away by keeper and captain Farizal Marlias, but the follow-up from Anjan Bista hit the sidenetting in the injury time.

KATHMANDU, July 24: Nepal defeated Malaysia by 5 wickets in their second encounter under the ICC Aisa U-19 World Cup... Read More...