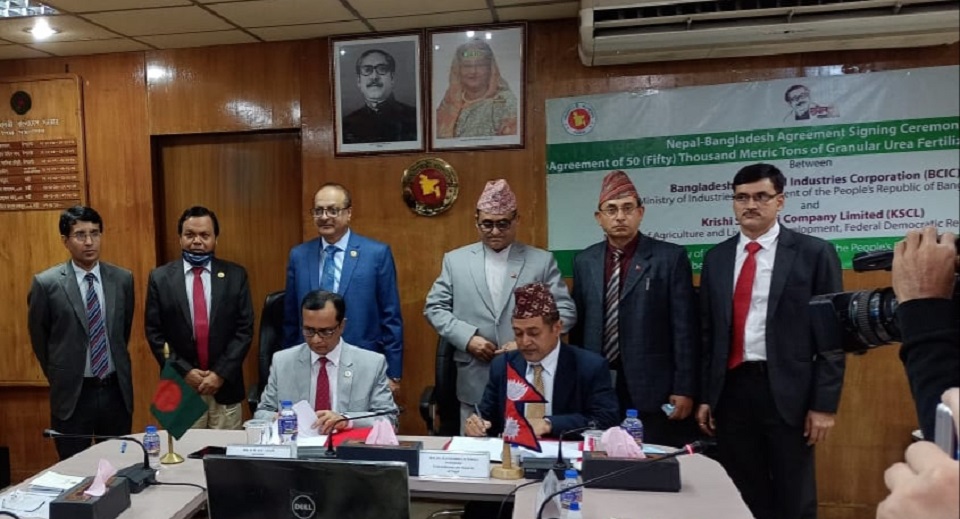 KATHMANDU, Dec 18: The government has signed an agreement with Bangladesh to purchase 50,000 metric tons of urea fertilizer. An agreement between the government companies of the two countries was signed on Thursday at the initiative of the Ministry of Agriculture and Livestock Development (MoALD).

The agreement has been signed by Netra Bahadur Bhandari, Managing Director of Krishi Samagri Company and Mohammad Amin Ul Ahsan, Chairman of Bangladesh Chemical Industries Corporation of Bangladesh. The ministry is going to import the fertilizer by signing an agreement between the companies of the two countries as it is cumbersome and time consuming to procure the fertilizer through the tender process. The G2G was signed as fertilizer on loan is more expensive for Nepal.

It has been agreed to import 50,000 metric tons of fertilizers in two ways; urea block and cargo. The fertilizer being imported to Nepal is produced by Bangladesh.

Nepal has been procuring fertilizers on G2G level from India until now. “Once the process starts, fertilizer can be procured from Bangladesh through G2G in the coming days,” Karki told Republica, “This is an important achievement in the agriculture sector.” The ministry has taken the procurement process forward with the approval of the cabinet.

45,000 metric tonnes of urea purchased from Bangladesh arrive in Nepal

KATHMANDU, July 1: A consignment of 45,000 metric tonnes of urea that Nepal had purchased from Bangladesh has arrived in... Read More...