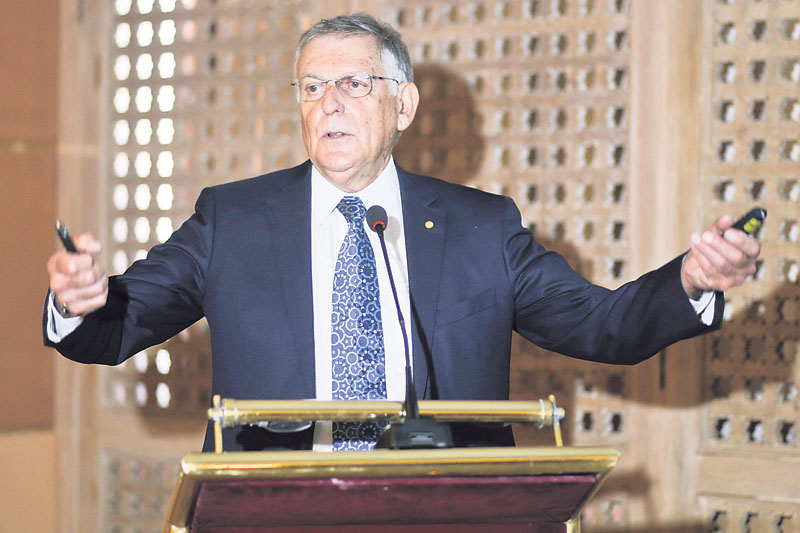 KATHMANDU, Sept 20: Soaltee Crowne Plaza's Malshree Hall was jam-packed on Monday with scientists, engineers, politicians and students. They had gathered to attend a lecture from Nobel laureate Dan Shechtman.

But Shechtman, the 75-year-old Israeli engineer and material scientist most famous for winning 2011's Nobel Prize for Chemistry for his research on quasicrystals, wasn't there to deliver any of his scientific papers.

Upon the invitation of the Embassy of Israel, Shechtman spoke for nearly one hour emphasizing the role of technological entrepreneurship in transforming third world countries into efficient economies. His lecture was titled 'Technological Entrepreneurship - Key to World Peace and Prosperity'.

He said that technological entrepreneurship is the answer to economic prosperity but to ensure that countries like Nepal should develop entrepreneurial spirit and knowledge in their youths.

“Entrepreneurship doesn't come naturally to anyone. You have to teach it like you teach mathematics,” said Shechtman, who's in the capital as an invited speaker for the 13th International Conference on Quasicrystals (ICQ13) that will run through September 23 in Dhulikhel.

For more than 30 years Shechtman has been teaching Technological Entrepreneurship at Technion, the Israel Institute of Technology in Haifa which is also his alma mater. Every year, 600 students mostly from the institute's technical faculties take his class, where he invites successful entrepreneurs and fresh startups to share their stories of breakthroughs and failures. “When I graduated from Technion, I was convinced that I could easily get a job at some company but months passed by and nobody hired me. So I decided to be a lecturer at the institute and design a class that inspired students to start their own business,” he said.

His activism to promote technological entrepreneurs isn't limited to the confines of his classroom.

Back home in Israel, he appears in a TV show called 'To Be a Scientist with Professor Dan' which is a kids' show featuring basic science stuff that encourages children to explore their world through science.

Throughout his lecture at Soaltee, he regularly brought up Israel's economic rise. “Israel is a small country with a small population and small market. So majority of our products are exports. If you produce products more efficiently, you can compete easily in foreign markets “When you come up with a new thing, it is innovation. When you turn your innovation into something marketable that's entrepreneurship. And the world needs more entrepreneurs than just innovators,” said Shechtman.

And our collaboration with Nepal has given us a positive impression that Nepal will be economically efficient in the years to come.”