Nepal salvages draw against Malaysia in an eight-goal thriller 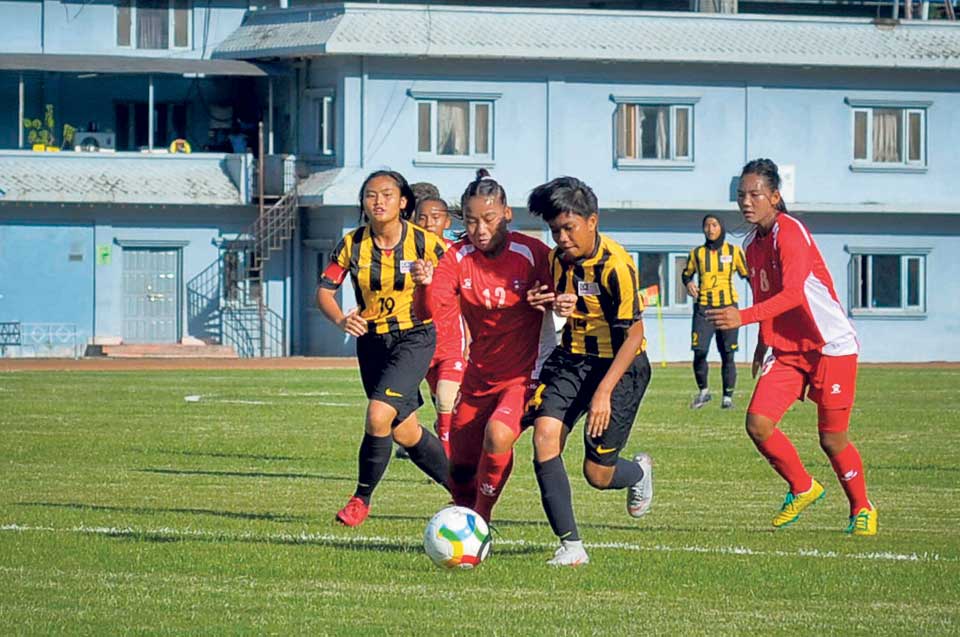 Sabita Rana Magar (12) of Nepal and Nural of Malaysia vie for the ball during an AFC U-16 Women’s Championship Qualifiers Group E match at the Halchowk Stadium in Kathmandu on Sunday. | Photo: Bijay Gajmer/Republica

KATHMANDU, Sept 24: Nepal U-16 women’s team and Malaysia played a thrilling 4-4 draw in the last Group E match in the AFC U-16 Women’s Championship Qualifiers, on Sunday.

In the match played at the Armed Police Force’s Halchowk Stadium at Halchowk in Kathmandu, both Nepal and Malaysia, who are already out of the qualification scenario, registered a point each.

Malaysia had taken the lead in the match in a 25th minute penalty, but Nepal’s Sabita Rana Magar pulled the game back on track with a 32nd minute goal. Nurul Arlian gave Malaysia the lead again six minutes after that, but Nepal equalized again as Magar’s grounded shot hit the post and was turned in by Malaysia’s Waitai Taming into her own net in the last minute of the first half.

The first half ended 2-2, and Nepal took the lead for the first time in the match with a 56th minute goal from the penalty through captain Preeti Rai to make the score 3-2.

Malaysia equalized to make the score 3-3 with a goal from Arliyana Nabila in the 68th minute.

The match became more interesting as Malaysia took the lead for the third time in the match through Hellama Emali in the 78th minute, but Nepal’s Sushma Tamang equalized it again five minutes from time to make the score 4-4.

The game ended in a draw after both the teams failed to score additional goal and shared a point each.

Nepal’s head coach Ganga Gurung said that the team has learned a lesson from the participation in the tournament.

“We got a chance to learn about the technical side as well as how to set a tactics in the match from this international tournament,” Gurung said.

“We had a problem in the defending areas and the defenders failed to showcase better performance in the tournament which is the reason we could not perform well in the tournament. Experience is very important in that regard,” Gurung added.

“We lacked experience in the tournament in comparison to the others teams,” Gurung further added, “If we want to make our team like the others, we need take part in more and more international tournaments.’’

Likewise, Myanmar has advanced into the second round by virtue of being the group winner with a big 5-1 win over the Philippines on the same day.

Myanmar won all three games of the group and registered nine points. Myanmar defeated Malaysia 3-0 in the first match of the group, while it thrashed Nepal 11-1.

The Philippines, who saw off Nepal in the first match 4-0, narrowly beat Malaysia 1-0. Even though the team lost a game, it became the group runner-up with six points. The Philippines now has to wait for the results of the other games to see if it reaches the second round.

Six group winners and two group runner-ups out of the six groups will only get to take part in the tournament.

Including the host Thailand, matches including Japan, North Korea and South Korea has already been decided to be played in September.

KATHMANDU, Sept 20: With a 4-0 defeat to the Philippines in the first match of the AFC U-16 Women’s Championship Qualifiers... Read More...

Nepal humiliated 11-1 by Myanmar; crashes out of AFC U-16 Women’s Championship Qualifiers

KATHMANDU, Sept 22: Nepal crashed out of ongoing AFC U-16 Women’s Championship Qualifiers after humiliating 11-1 defeat by Myanmar in... Read More...

KATHMANDU, Sept 18: Nepal U-16 women’s team will kick off its AFC U-16 Women’s Championship Qualifiers facing the Philippines on Wednesday. Read More...