KATHMANDU, Sept 19: Nepali Embassy in Cairo hosted a reception to celebrate the National Day of Nepal at Conrad Hotel in Cairo on Wednesday.

On the occasion, Ambassador Aryal delivered a speech highlighting the importance of the Constitution as well as the salient features of Nepal's constitution.

The ambassador also shed light on the excellent state of bilateral relations between Nepal and Egypt stating that both countries treasure ancient cultures and civilizations, thus exists tremendous scope and potential to further promote tourism, trade, investment for the mutual benefit of the two countries.

He informed that the Government of Nepal has designated 2020 as Visit Nepal Year to attract more forests tourists. 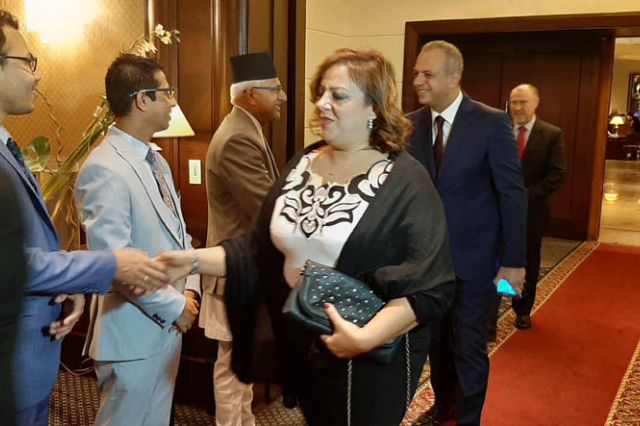 Assistant Minister for Foreign Affairs of Egypt extended best wishes on behalf of the Government of the Arab Republic of Egypt and expressed his happiness that Nepal and Egypt enjoy an excellent state of bilateral relations. He also highlighted the bilateral relations matured over more than six decades, expanding the areas of cooperation in the best interests of the two countries.

The program had begun playing the national anthems of the two countries. Nepal's cultural heritages, beautiful geographical landscapes, adventure tourism activities, wildlife in Nepal were screened throughout the program.

Nepali artists performed cultural dances during the reception. A celebration cake to mark the special day was cut jointly by the chief guest and the Ambassador of Nepal to Egypt. The reception was followed by dinner.

A full-page coverage on Nepal having some facts and figures, investment and tourism opportunities, information on Visit Nepal Year 2020 including the message of the ambassador also published in Egyptian Gazette, popular English daily of Egypt.

Earlier in the morning, Chamberlain of the Presidency Abdel Aziz El-Sherif met Nepali Ambassador to Egypt Jhabindra Prasad Aryal at the latter's office to convey Egyptian President's greetings to the President of Nepal and Nepali people on this special occasion.

KATHMANDU, Aug 29: A controversial remark made by Communications Minister Gokul Banskota that the public holiday announced to mark the Constitution... Read More...