KATHMANDU, Sept 24: Nepali Embassy in Qatar hosted a reception to mark the National Day and Constitution Day of Nepal today amid a ceremony organized in Doha on Monday.

Minister of Justice and Minister of State for the Council of Ministers Affairs of the State of Qatar, Issa bin Saad Al Jafali Al Nuaimi, Minister of Administrative Development, Labor and Social Affairs of Qatar Yousuf Mohamed Al Othman Fakhroo were the two chief guests of the event. The chief guests and other guests were welcomed with live traditional Nepali music. 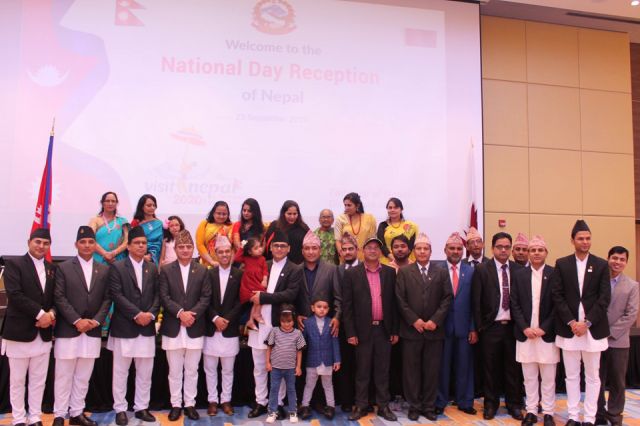 The opening ceremony began with the national anthems of the State of Qatar and Nepal. Charge d’ affaires of the Embassy Lakshuman Khanal and the chief guests cut the special cake prepared for the occasion to mark the ceremony.

While addressing the ceremony, Charge d’Affaires Khanal highlighted the importance of the National Day and Constitution Day of Nepal. He said that Nepal's Constitution has guaranteed inclusiveness and democratic polity.

In his remarks, Khanal recalled the visit of President Bidya Devi Bhandari and other dignitaries to the State of Qatar. He appreciated the cordial and friendly bilateral relations between the two countries. He further expressed confidence that the two countries will deepen their cooperation in the coming days. 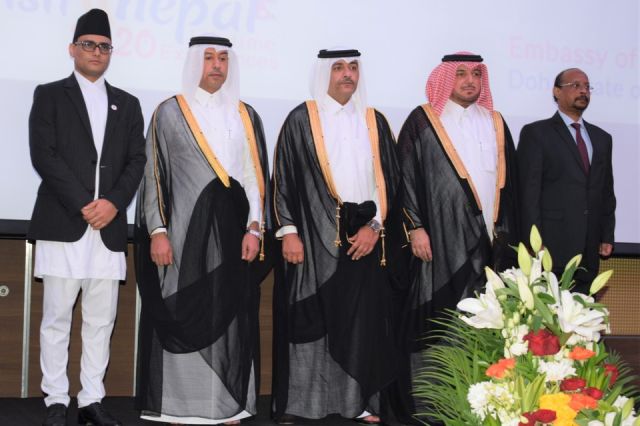 Referring to Nepali people’s aspiration for peace, progress, and prosperity under the guiding motto of “Prosperous Nepal, and Happy Nepali”, Khanal urged the Qatari investors to make the investment in Nepal. He also mentioned about Nepal's preparations to mark 2020 as Visit Nepal Year.

He appreciated the people and the Government of Qatar for welcoming thousands of Nepalis. He also expressed happiness over the growing trade relations between the two countries.

Chief of Protocol of the Ministry of Foreign Affairs of Qatar, Dean of Diplomatic Corps, ambassadors, members of the diplomatic community, dignitaries from various organizations in Qatar, journalists and members from Nepali community were present during the event.

Earlier, on 20th September, the embassy had organized a National Day and Constitution Day Ceremony on the embassy premises. Members of Nepali community and diplomatic staffs and their family members were present on the occasion. The ceremony began with the national anthem of Nepal. Charge d’Affairs Khanal hoisted the national flag to mark the auspicious occasion. In his remarks, Khanal extended his greetings and best wishes to the Nepali community in Qatar. He also highlighted various aspects of Nepal Qatar relations and the role of the Nepali community in promoting these relations as well in contributing to the economic development of Nepal.

UML aims to take Nepal to a state where citizens can get treatment easily: Oli

Constitution Day holiday is not for drinking and dating: Information Minister Baskota