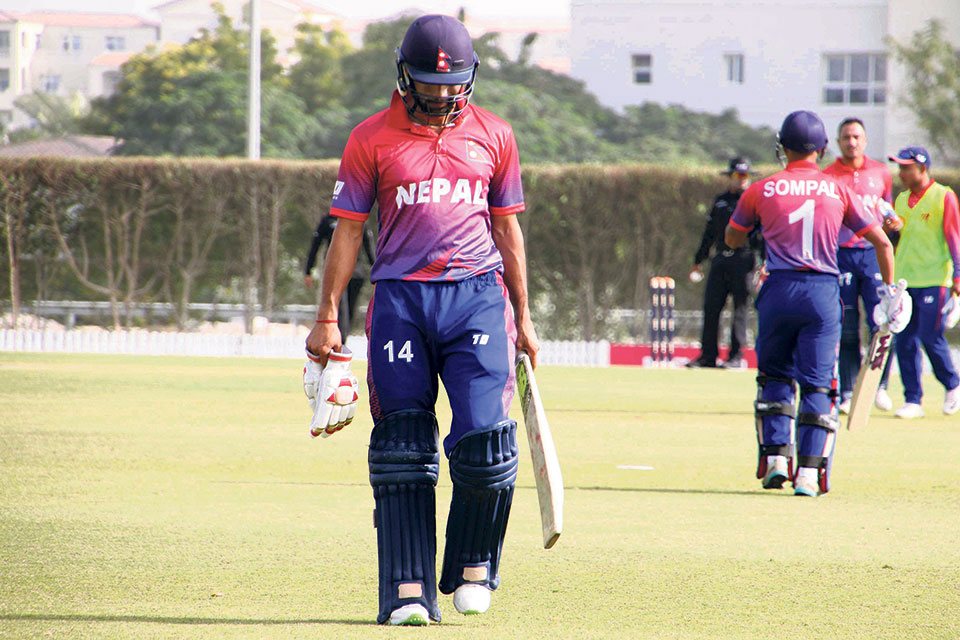 KATHMANDU, Jan 26: An inspired bowling performance by Nepali bowlers could not prevent a three-wicket loss against the United Arab Emirates (UAE) in the first One-Day International (ODI) match of the bilateral series being played at ICC Academy, Dubai on Friday.

The leg-spin sensation Lamichhane picked up back to back wickets in two overs to dismiss the top-scorer of the UAE innings Ghulam Shabber for 30 runs before castling debutant Fahad Nawaz’s stumps for two runs to remove the host team for 73 runs for the loss of six wickets in the 18.2 overs.

Skipper Khadka followed with a timely wicket of Mohammad Boota caught by wicket-keeper Binod Bhandari to reduce the UAE’s seventh wickets. Nepal seemed to be on a driving seat at that moment of the match.

However, Amir Hayat and Imran Haider, who earlier in the first innings created havoc with picking up crucial Nepali wickets, shared a partnership of unbeaten 43 runs to complete the chase.

Player of the match Hayat finished unbeaten on 24 runs facing 42 runs before smacking a winning six off Lamichhane’s first ball his last over of the match.

Similarly, Haider remained not out on 18 runs facing 39 deliveries which included two boundaries. With no pressure of run rate, the two lower order batsmen completed the chase with 17.5 overs to go.

Shabbir scored the most runs for the UAE during his 48-ball stay including three boundaries. Karan KC had removed Ashfaq Ahmed and Shaiman Anwar for five and 11 runs respectively on either side of the lunch break to give Nepal a head start defending the lowly total of 113 runs.

Similarly, Sompal Kami picked up a wicket of Chirag Suri for four runs during the early overs of the second innings.

Earlier, the UAE won the toss and invited Nepal to bat first in the first ODI of the three-match bilateral series. Nepal made noteworthy changes in the playing XI with debutant wicket-keeper batsman Binod Bhandari opening the batting whereas fast bowler Kami trusted with number four batting role.

Bhandari experiment didn’t last long as he departed soon scoring five runs from 14 deliveries after Nepal lost Gyanendra Malla for a duck in the first over of the innings.

Both wickets were taken by the stand-in UAE captain Mohammad Naveed. Skipper Khadka made 20 runs before holding out to Hayat off a short ball from Qadeer Ahmed.

Similarly, the miscommunication between Kami and Dipendra Singh Airee saw latter being run out for a duck playing two deliveries. Nepal was reduced to 47 runs for the loss of four wickets in the 12.4 overs.

The visiting team seemed to steady things with Kami batting on 30 runs in a small partnership of 24 runs with Aarif Sheikh before getting trapped LBW by the UAE leg-spinner Imran Haider.

Soon Hayat sent debutant Pawan Sarraf back to hut for four runs reducing Nepal to 76 runs for the loss of six wickets in 21.3 overs.

Eventually Nepal was all out for 113 runs in 33.5 overs with Sandeep Lamichhane adding valuable 15 runs batting at number 10.

The third debutant for Nepal in the match, Lalit Rajbanshi remained not out on two runs. Likewise, Aarif was second highest run-scorer of the innings with 25 runs from 43 deliveries which included three boundaries.
Hayat and Naveed led the bowling attack with three wickets each in their respective 7.5 and nine overs in the match. They conceded combined 50 runs and registered two maiden overs each.

Leg-spinner Haider was equally impressive with his bowling picking up the wicket of Kami and Qadeer dismissing Khadka in a complete bowling performance by the UAE.

Nepal skipper Khadka expressed the wicket to be difficult to bat on and it was difference of few runs at the end. “The pitch wasn’t the easiest one to bat. It was a green top and both teams struggled to bat.
The ball seamed till the end of the match. We were few runs short but having said that, we almost had the match in our grasp at one stage.”

He further added to make changes according to the wicket on offer on Saturday for next game. “We will sit down with the coaching unit and look to get the best XI according to the pitch conditions tomorrow. Either we bat or bowl, we will look to start well in the first hour and take it from there.”
Both teams will play second ODI on Saturday in the same ground.

Efforts being made to bring the RSP back in govt: Minister Sharma
18 hours ago

Nagma-Gamadhi road to be upgraded
28 minutes ago