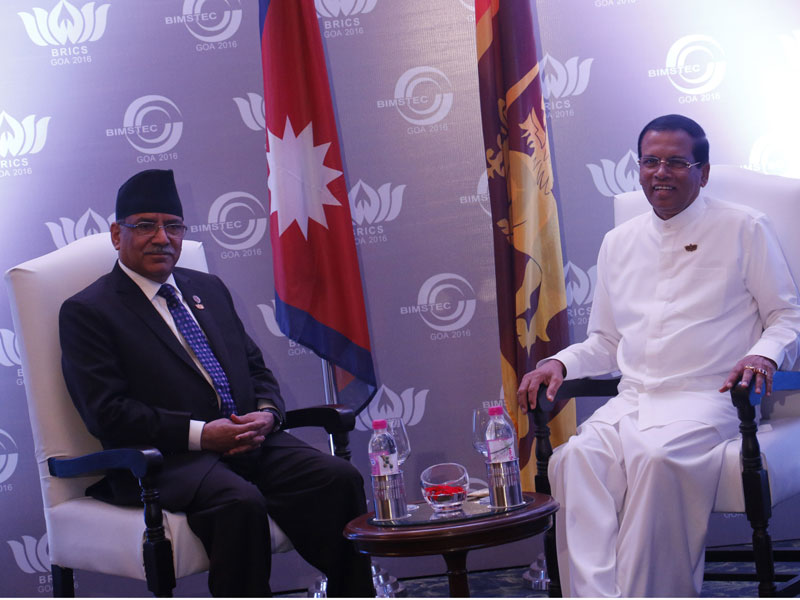 On the occasion, matters relating to operating direct flights between the two countries and hosting the stalled 19th SAARC (South Asian Association for Regional Cooperation ) Summit were discussed at the meeting held at local Leela Hotel.

During the meeting, Prime Minister Dahal said though Nepal and Sri Lanka are somehow far in terms of geographical location, both countries need to play role in the overall development of the South Asia and in the maintenance of cordial relations among the SAARC countries.

Emphasizing on the need of holding the Summit of the regional body as soon as possible, he said the member countries should have common views regarding this.

The Prime Minister, on the occasion, also requested the Sri Lankan President to reconsider the capital punishment handed by Sri Lanka to a Nepali citizen Chet Bahadur Thapa ( Lalitpur) on a case of drugs smuggling and make effective measures to control trafficking of Nepali women to the gulf countries via Sri Lanka.

Stating that Sri Lanka shares friendly relations with Nepal, the Sri Lankan President underscored the need of making collective efforts to organised the SAARC Summit. He said Sri Lanka was positive towards the concerns put forth by Nepal. RSS

KATHMANDU, Nov 28: Nepal will take on another Test-playing nation Sri Lanka in its second match in the ongoing ACC Women's... Read More...