Nepal remains winless in U-19 qualifiers 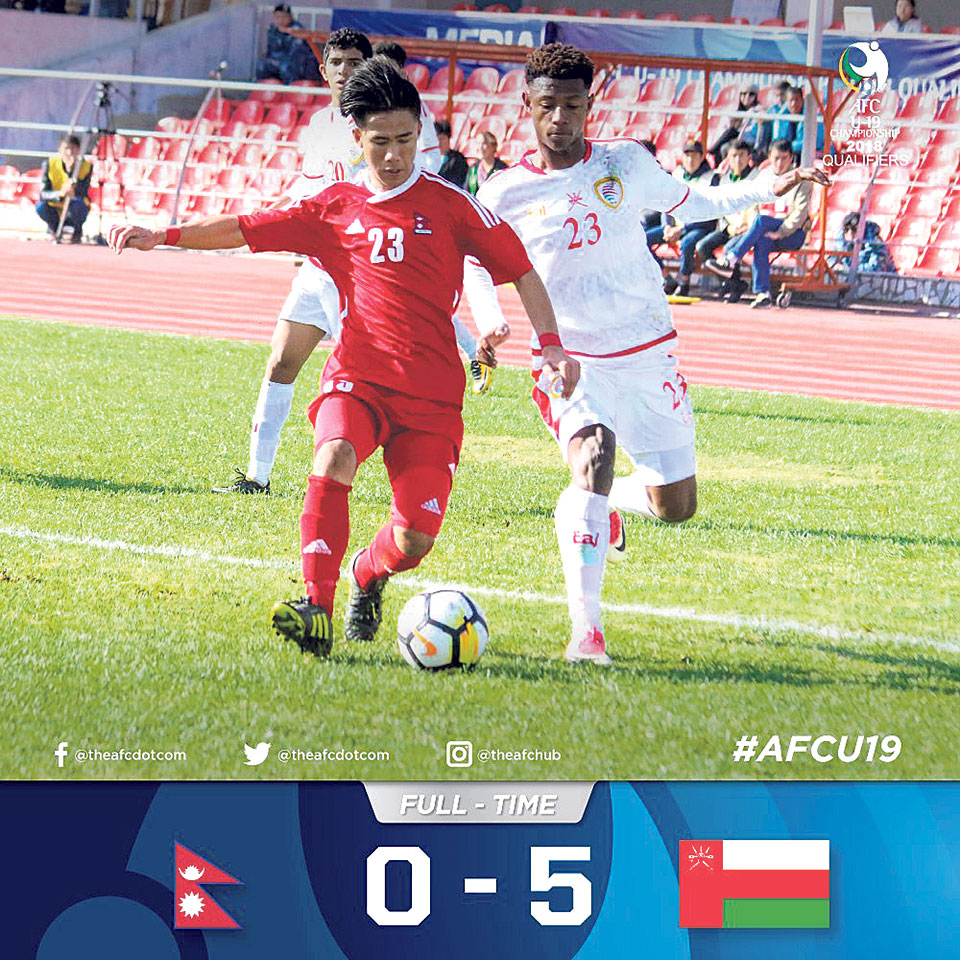 KATHMANDU, Nov 9: Nepal has ended the AFC U-19 Championship 2018 Qualifiers with 5-0 defeat to Oman on Wednesday.

The Nepali football team which had travelled to Kyrgyzstan with a target of securing its berth in the final round finished in the bottom of Group A of Qualifiers without earning any point.

Alharthi and Arshad Said Al-Alawi scored the brace for Oman while Thamir Al Zaabi added another to record an easy win over Nepal at Dolen Omurzakov Stadium, Bishkek.

Similarly Alharthi scored his personal second at the end of first half to help his team progress towards a comfortable victory.

Oman increased its pressure on helpless Nepal in the second half as well with Thamir Al Zaabi making 4-0 in the 58th minute. One minute later, Arshad Said Al-Alawi netted his second goal of the match to make the score-line 5-0.

Most of the time, Nepal was busy in own half trying to stop Omani players to attack, but failed to prevent goals.

Nepali team which was without its two influential attackers-- Abhisekh Rijal and Dinesh Henjan—couldn’t even make a single attempt in Omani post.

Nepal which had travelled to Kyrgyzstan as a SAFF U-18 Championship winner failed to perform up its level. The young Nepali side led by head coach Tshering Lopsang failed to score a single goal while conceded 12 goals in 5-team contest.

Nepal had begun the qualifying campaign facing 2-0 loss at the hands of home team Kyrgyzstan followed by 4-0 defeat to Bahrain in second group stage match.

Since the group topper seals its place in the final round of the Championship to be held in Indonesia next year, UAE has already qualified.

Despite suffering narrow 1-0 defeat to Bahrain in its last match on Wednesday evening, UAE secured its berth in the qualification as group topper with seven points.  Oman has seven points from four matches and has qualification hope alive as five best runner-ups joins 10 group winners
and host Indonesia in Championship.

KATHMANDU, Jan 14: Nepal conceded another loss in the ongoing fifth edition of the Blind Cricket World Cup in a match... Read More...