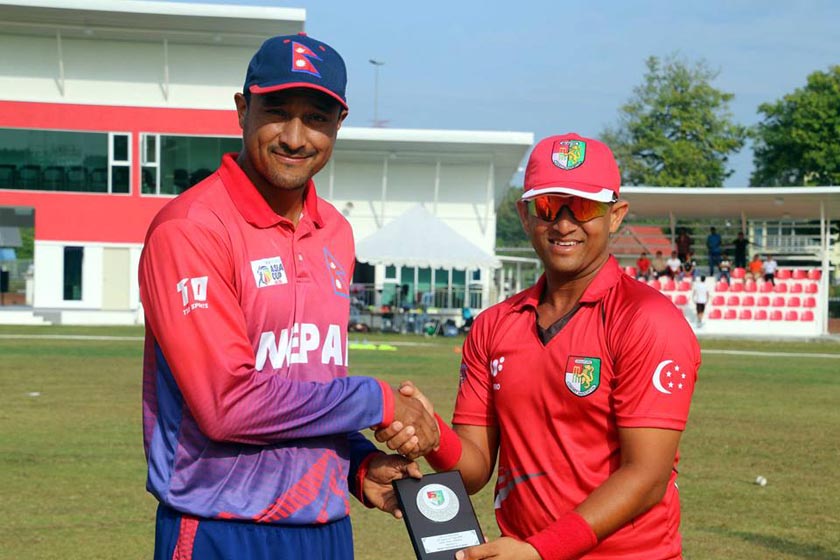 KATHMANDU, Oct 12: Singapore has set a target of 82 for Nepal in ongoing ICC World Twenty20 Asia Region Qualifier. In the first innings of the last match of group B played in Kuala Lumpur on Friday, Nepal won the toss and chose to field.

Surendran Chandran scored highest 25 runs in 32 balls including three fours for Singapore whereas Manpreet Singh and Sidhant hit 10 runs before returning to the pavilion. Other batsmen could not score double-digit scores for the team.

Meanwhile, Sandeep Lamichhane has set a national record by taking 24 wickets in one tournament.

Nepal and Singapore lead the points table on position 1 and 2 respectively winning five out of five matches in the tournament. Both teams are looking for their sixth consecutive victory to win the tournament. Nepal, along with Singapore, has already secured its berths for the ICC World T20 Asia Qualifier finals slated for the end of 2018 where it will join Kuwait, Qatar and United Arab Emirates, who won the Asia Region Qualifier ‘A’. The top two teams from the final Asian qualifier will join global qualifier league next year.

Teams from different regions of the world and bottom-ranked test teams will play in the global qualifier to secure their place in ICC World T20, Australia, 2020.

KATHMANDU, July 5: Nepal advanced to the semi-final of the ongoing ACC U 19 Eastern Region Cricket Tournament by becoming... Read More...

Man beaten to death in Dhanusha
50 minutes ago