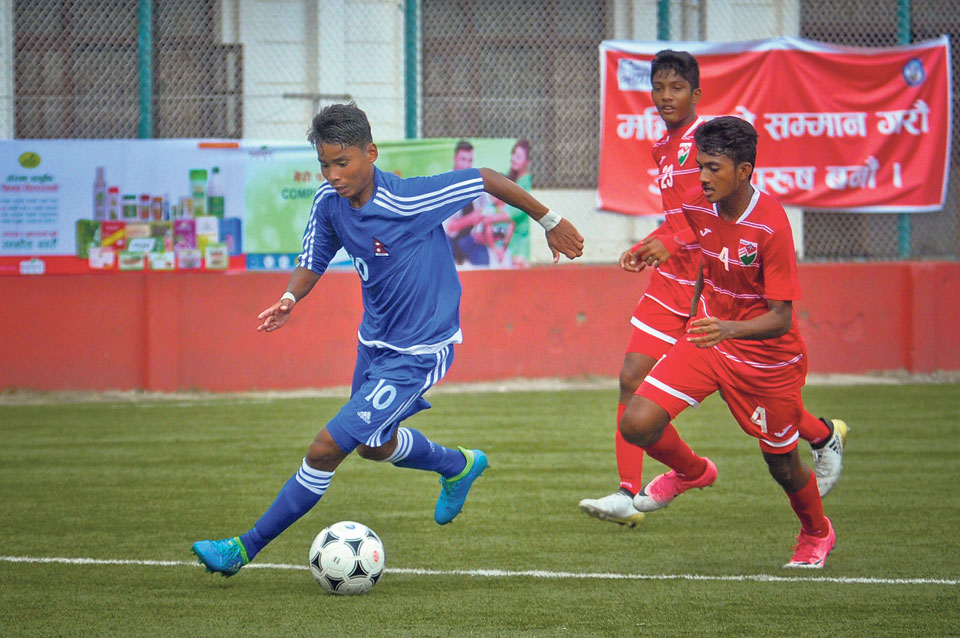 Bijay Gajmer/Republica Nepal’s Birjesh Chaudhary (left) and Maldives’ Ibrahim Anoof in action during a SAFF U-15 Championship group stage match at the ANFA Complex in Satdobato, Lalitpur, on Monday.

KATHMANDU, August 22: Nepal has reached to the semifinals of the ongoing SAFF U-15 Championship, by defeating Maldives on Monday.

Nepal registered a thumping win of 6-0 over Maldives in its first group match, which means the host team has secured its place in the last four with a game in hand. Next in the group match, Nepal will face India, which will decide the winner of group B.

Meanwhile, Maldives has now crashed out from the championship with consecutive defeats. Earlier on Saturday, Maldives had faced a 9-0 loss at the hands of India.
In the match played at ANFA Complex, Satdobato, Nepal’s Brijesh Chaudhary scored a brace while Darshan Gurung, Roshan Rana Magar, Roshan Dong and Akash Budha Magar added one goal each.

Chaudhary kept the home team in the driving seat by scoring an opener in the 14th minute. He scored a brilliant header utilizing the pass from Darshan Gurung who later scored Nepal’s second goal in the 21st minute.

Skipper Roshan Rana Magar gave 3-0 lead to Nepal by scoring through the spot in the 37th minute. Nepal was given a penalty after Maldives’ Mohamed Faihaan Imran handed the ball in danger zone. Magar made no mistake to score from the spot. Akash Budha Magar raised the score to 4-0 for the home team in the last minute of first half. Substitute striker Magar collected the re-bound ball coming from Maldivian goalkeeper Mohamed Raif Abdulla following the shot from Randip Paudel.

Nepal kept its dominance in the second half as well with Roshan Dong netting the winning team’s fifth goal in the 47th minute. Likewise, Chaudhary struck his personal second in the 73rd minute to help Nepal sealing 6-0 victory.

After guiding his team to the last four, Nepali coach Sunil Kumar Shrestha said that his players acted upon the strategy of scoring high number of goals. “Since India had scored nine goals against Maldives, we wanted to show similar strength of scoring,” Shrestha said.

However, he wasn’t satisfied with team’s defense. “Due to a pressure of scoring high, our players were more on the attacking side, leaving a space behind them that could have allowed Maldives to hit in counter attack,” Shrestha said.

“We have to concentrate on this aspect in the next match, as India is a tough team. We also have to improve our finishing ability,” Shrestha added.

Maldivian coach Mohamed Shaazly said that the tie-draw was unkind for his team as it had to play against two strong teams, India and Nepal, back to back. “If the tie against Nepal was our last group match, then probably the result would have been different. We were unknown about the teams of India and Nepal, but we had to play back to back with them,” Shaazly said: “It didn’t help us.”

However, he praised the performance of his players. “Though the outcome of the match was disappointing, the performance of my boys was not that poor. We created some good chances in the match and created pressure upon the home team,” Shaazly said. He also raised question over the age of the Indian players.

“I have doubt about the age of the Indian players since they are physically stronger than the players of rest of the nations in the championship. They seem surprisingly tougher than others,” Shaazly said, talking in a post-match conference after the defeat to Nepal.

On Tuesday, Bhutan and Bangladesh will compete in group A which will decide the group winner. Both teams have already advanced to the last four with victories over Sri Lanka, which has crashed out from the championship.

Nepal to play against Pakistan today