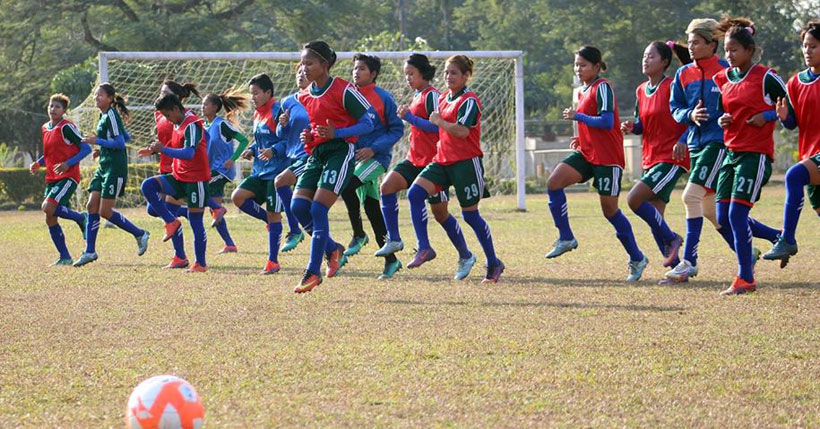 KATHMANDU, Jan 2:Before leaving for India to compete in the SAFF Women's Championship, the major concern of Nepal's head coach Kumar Thapa was the potential semifinal opponent rather than the final match.

According to Thapa, any team from Group B that consists of India, Bangladesh and Afghanistan, would be an equally tough opponent for three times runner-up Nepal in the semifinal.

“My primary concern is the semifinal opponent, not the finalist because semifinal will be equally tough as the final,” head coach Thapa had said during the preparation for the championship.

Now, his concern has been justified as Nepal will take on title favorite India in the semifinal of the SAFF Women's Championship's at Kanchenjunga Stadium, Siliguri on Monday. Nepal and India have played all three finals of the championship in which dominant India had won all three matches..

Nepal, which had lost the final match of the inaugural edition in 2010 with a goal margin of 1-0, hasn't been able to give tough challenge to India lately as it lost the finals of 2012 and 2014 with scorelines of 3-1 and 6-0 respectively.

However, head coach Thapa is optimistic of producing positive result against India. “India is very tough opponent as it is the defending champion. But we know that none is unbeatable in football. We have been consistent with our performance and with the same level of performance we can beat them to be the new champion,” said head coach Thapa.

Looking at the group stage performance, Nepal made a solid start and India hasn't played to its potential. Nepal pitted in Group A won all of its matches as it edged past Bhutan 8-0 in the opening match before registering a comprehensive 9-0 victory over the Maldives.

In the last match, Nepal defeated Sri Lanka 1-0 to produce cent percent winning record. In the meantime, India overcame Afghanistan in the opening match 5-1 but played a goalless draw against Bangladesh for the first time in the championship.

“We need to remain calm and compact and avoid conceding early goal. We will force Indian players to make mistakes,” said head coach Thapa when asked about the plan for the semifinal match.

“We have watched the Indian team playing very closely in this championship so we know we can stop them with good strategy. We have talented line of defense. Moreover, we will defend as a team and also attack in the same way for victory,” Thapa shared his plan.

Sabitra Bhandari of the Nepali team is currently the highest scorer of the tournament with 11 goals but head coach Thapa is still not happy with the team's goal scoring prowess as he wants goals from other players as well.

“Sabitra is in good form but I need more players to score and make the team more threatening,” said head coach Thapa.

He also hinted that there could be couple of changes in the starting lineup as Anjila Tumbapo Subba is likely to start in goalkeeping and one among Saru Limbu, Nirmala BK and Krishna Khatri to come in for Anita Basnet or Sharmila Thapa.

In the meantime, Indian head coach Sajid Dar said that Nepal is performing better than other teams and expected tough competition from fellow South Asian nation. “There is no denying that they are one step ahead than rest of the teams of SAFF Championship.

They have prepared thoroughly for the championship. They are a very strong side and have always been tough competitor,” said Dar to All India Football Federation (AIFF)'s website.

India's coach Dar, who helped his team to win gold in South Asian Games (SAG)'s women's football beating Nepal 4-0 in the final, said that the past result doesn't matter.

“That particular match is past, its history. The sport will never guarantee you the same result every time. This is a new tournament and everything is different,” said Dar. “In comparison to that championship, I feel Nepal is much more prepared for this tournament.

Having a look at their league matches, one can understand they have a different plan this time. We have to stay on our toes.”

KATHMANDU, Nov 24: Nepali national women's cricket team has set sight on beating at least one of the Test-playing sides in... Read More...